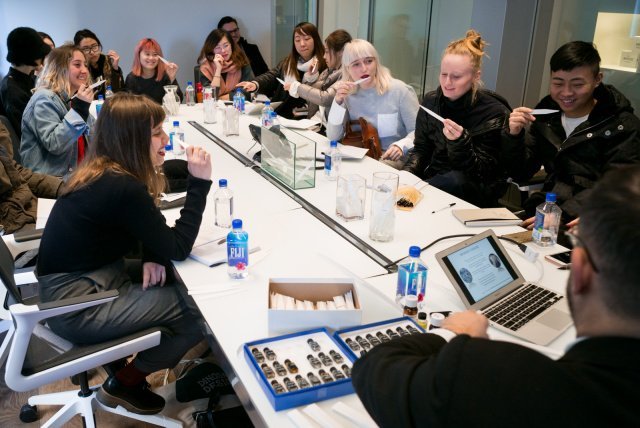 Fragrance house Robertet has been edging its way into the fashion world.
The operation, whose perfumers make scents for big name and indie brands, partnered with Parsons School of Design for a second time to get young designers thinking olfactively — early.
Robertet joined with Parsons for a class called "Synesthesia as Methodology," during which they gave students unmarked vials of fragrance. Students were charged with creating "lookbooks" over the holiday season with memories or inspiration from the the scent, according to Ryan Weafer, who teaches the class.
Robertet provides “fragrances they’ve already been developing, or sometimes composed of different notes or one note… get handed these little fragrance flasks with the number and they do not know what the ingredients are,” said Joffrey Moolhuizen, assistant professor of fashion design at Parsons.
“It was really forcing the designers to think about other senses and using smell…without actually knowing what the perfume was,” said Shelley Fox, Donna Karan professor of fashion and director, MFA Fashion Design & Society.
Those documents were used as part of the inspiration for the final fashion looks shown Friday, during New York Fashion Week. A wide variety of looks walked the runway, from reinterpreted uniforms to a walking, veiled American Express credit card.
For Robertet, the program allows it to access young designers — who may wind up with a fragrance as part of their overall fashion businesses one day — much earlier.
“They were trying to get a sense from designers coming into the process of understanding fragrance design a little earlier,” said Fox, noting that even designers with their own brand may not necessarily have a sense of how to design fragrance branding.
The process comes full circle for Robertet, which also draws inspiration from the final runway looks, according to Christophe Maubert, president of Robertet's fragrance division.
Source: Read Full Article