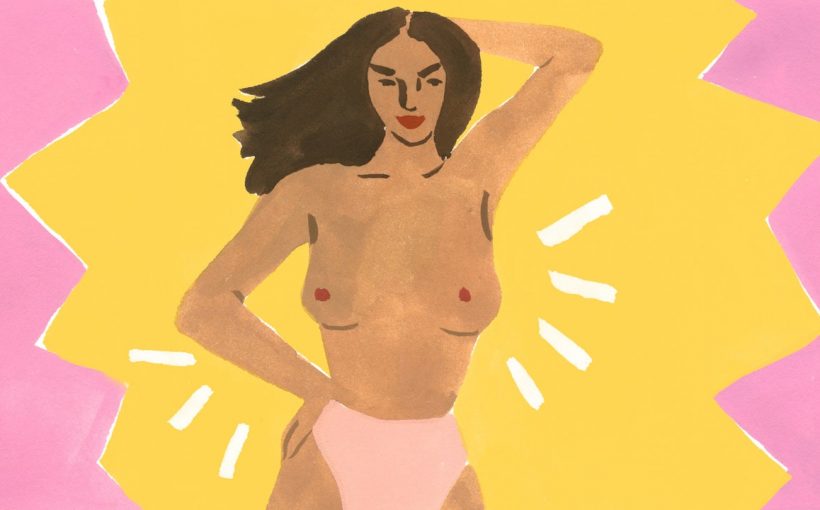 According to the American Cancer Society, breast cancer is the most common cancer among women in America aside from skin cancers; the ACS estimates that 281,550 new cases of invasive breast cancer will be diagnosed in 2021. While that is a scary number, survival rates are rising, and if the cancer is caught at stage 0 or stage 1, the five-year relative survival rate is nearly 100 percent.

That’s why early detection is so important. Mammography is the most effective screening tool currently available to detect breast cancer and there is at least one biomedical innovation, The Blue Box, that could soon make at-home testing a possibility. However, "even the most generous screenings don't start until the age of 40, and the newer guidelines recommend starting at the age of 50, so there is a population of women who are unscreened," says Dorraya El-Ashry, chief scientific officer of the Breast Cancer Research Foundation. Until better screenings become available for all ages, you can stay in tune with changes in your breasts by doing a self-exam once a month.

While there are conflicting views on the efficacy of breast self-exams, many experts — including breast cancer surgeon Susan K. Boolbol, chief of breast surgery at Mount Sinai Beth Israel — still recommend women begin conducting them in their 20s. "The reason behind doing breast self-exams is to be familiar with your body, because it’s enormously difficult to say if there's a problem when you don’t know what your norm is," Boolbol says. "So the more you are comfortable with your body, the better able you are to detect something new or different… Everyone's norm is different. Know what your norm is, and [look for] something outside your norm."

That’s also why it’s also important to conduct your self exam at the same time every month since breasts change over the course of your cycle. Boolbol recommends the last day or the week of your period, when your breasts are less tender. "As you go through your menstrual cycle, the hormones in your body stimulate and affect the feeling in the actual breast tissue," she says. "So…if you're doing [the exam] at all different times of the month, your breast exam will be different."

Follow this practical guide as you move through the steps of your self exam. 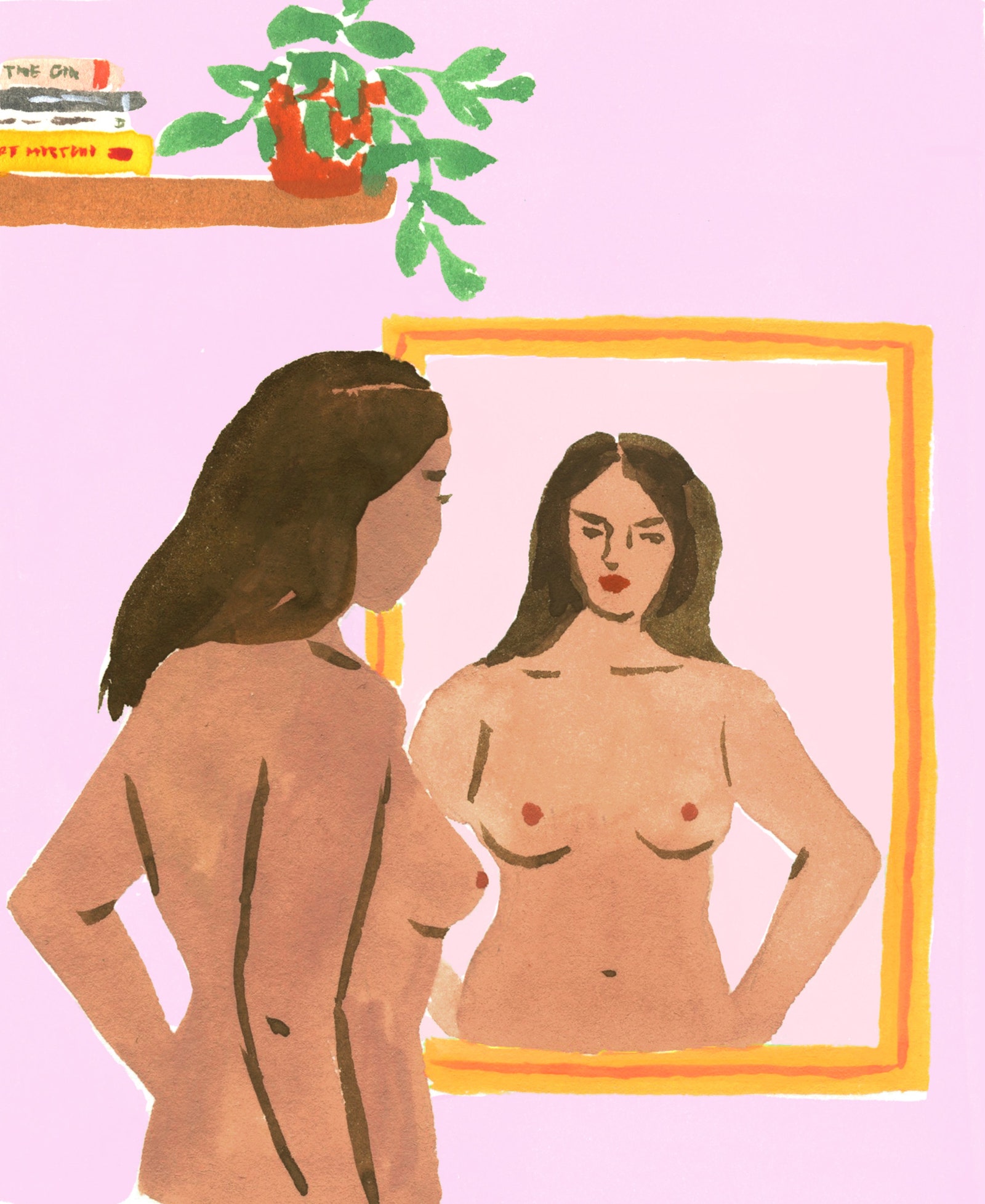 Start by looking at your breasts in the mirror, with your arms down at your sides or your hands on your hips. "Regardless of if you do your breast exam lying down, or in the shower, or in front of the mirror, a visual examination is important," Boolbol says. "So if you do your exam in the shower, you still need to, at some point, stand in front of the mirror and look at your breasts." Why is that important? "You won't feel if there’s a skin dimpling, but you will see it. There are certain things that you will be able to visualize but not feel."

Here are a few questions you should ask yourself as you look at your breasts in the mirror, according to Boolbol:

Nipple location: "Is there a change in the location of the nipple? Does it seem like it's being pulled to the side, for instance?"

Breast size: "Has one breast gotten larger than the other breast?"

If there are any changes from the previous month, or the answer to any of those questions is yes, make an appointment to see your doctor. 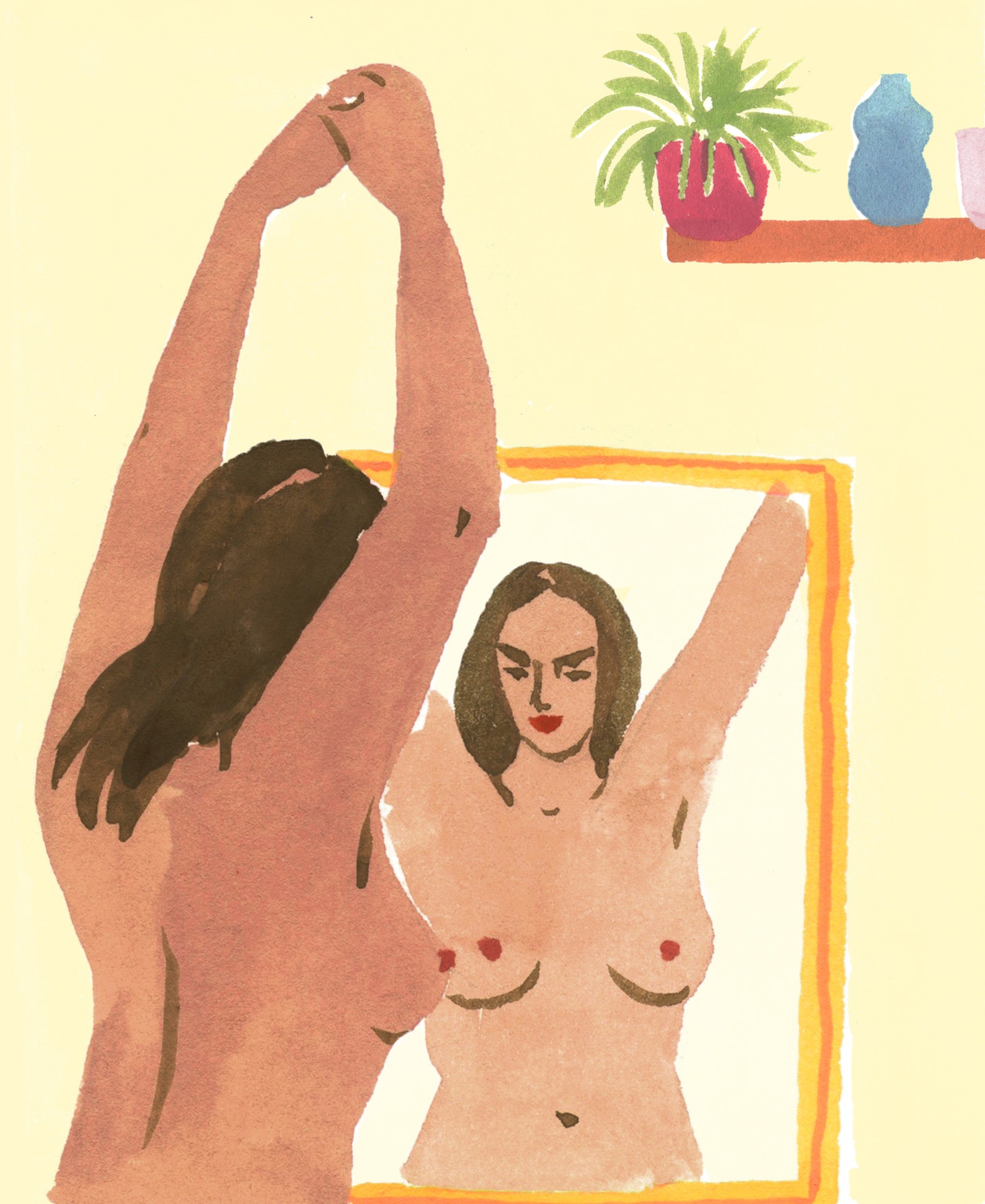 Continue your visual exam with your arms raised, looking for all of the same things as you were in Step 1. "The different arm positions can make changes in the breasts more obvious," Boolbol says. "For instance, if there is a mass in the breast and you put your arms up in the air, it may pull in. It may cause the skin to pull in at a certain region overlying the mass; whereas with your arms down by your side, that may not happen."

It's good to keep an eye out for fluid coming out of the nipples, but refrain from squeezing them in the process. "The reason we do not tell women to squeeze their nipples as part of the self breast exam is [that] non-spontaneous nipple discharge, which only occurs when you squeeze the nipples, is somewhat normal," Boolbol says. 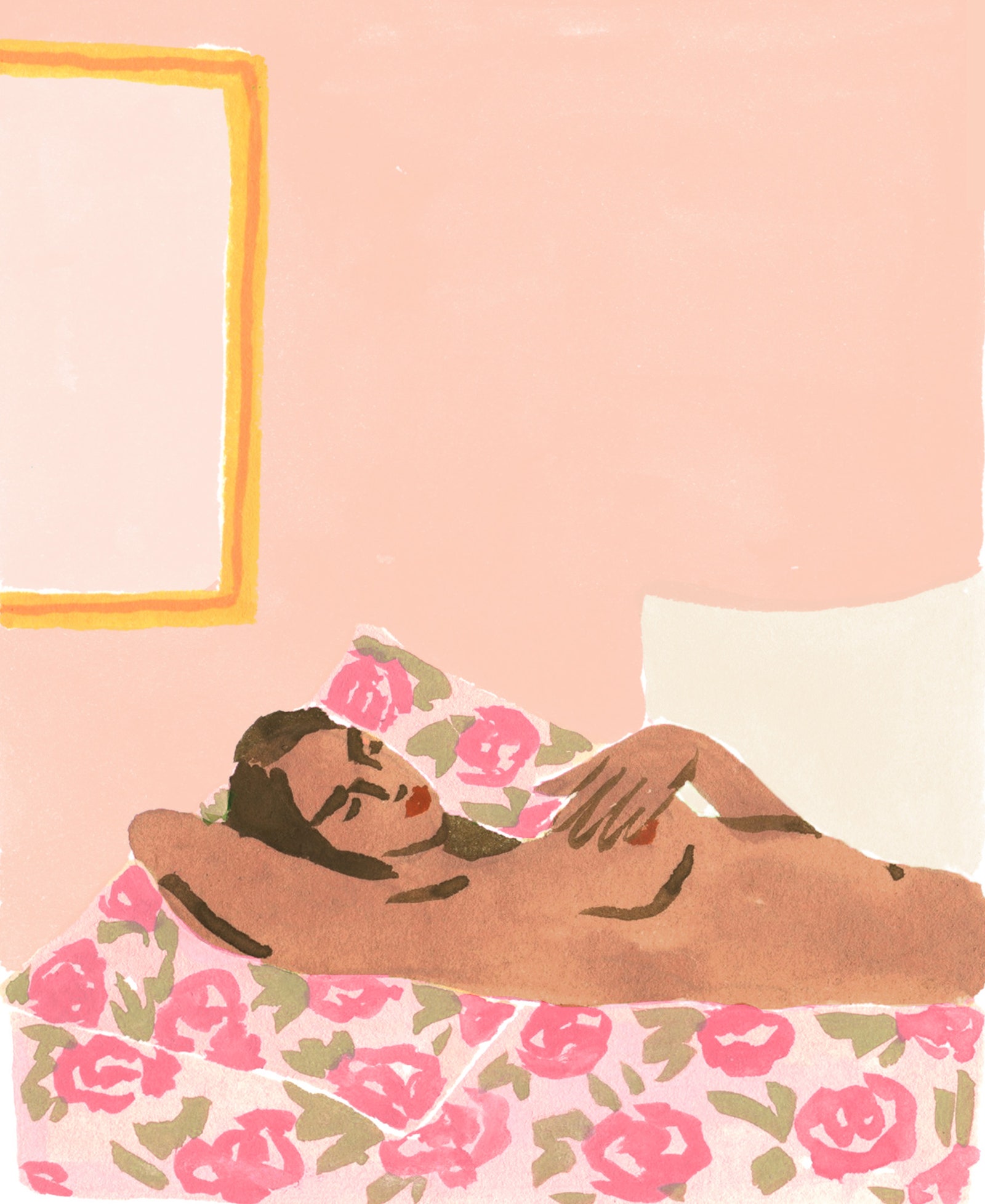 After completing the visual exam, start your physical exam. You can stay in front of the mirror for this part or move to the shower or another location, as long as the location is always the same. "The important thing is to be consistent," Boolbol says. "So if you're most comfortable in the shower, make sure you do it in the shower every month. If you're most comfortable standing in front of a mirror…then do it that way every month. But whatever way you’re doing it should be your norm."

Raise one arm. "If you're examining, for instance, the right breast, you should do it with your left hand and have your right arm or hand above your head. The reason for that is it actually helps pulls the breast away from the chest wall [and] allows us to appreciate changes in the breast."

Feel gently with your fingertips. "The key is you don’t have to press down firmly. It’s a light touch. This should not be a painful experience."

Cover the entire breast. "As you go around and you move in, you do want to feel behind the nipple; but again, not squeezing the nipple. And then you can feel up into the armpit, what we call the axilla."

Again, if you find anything out of the norm or different from previous months, visit your doctor. 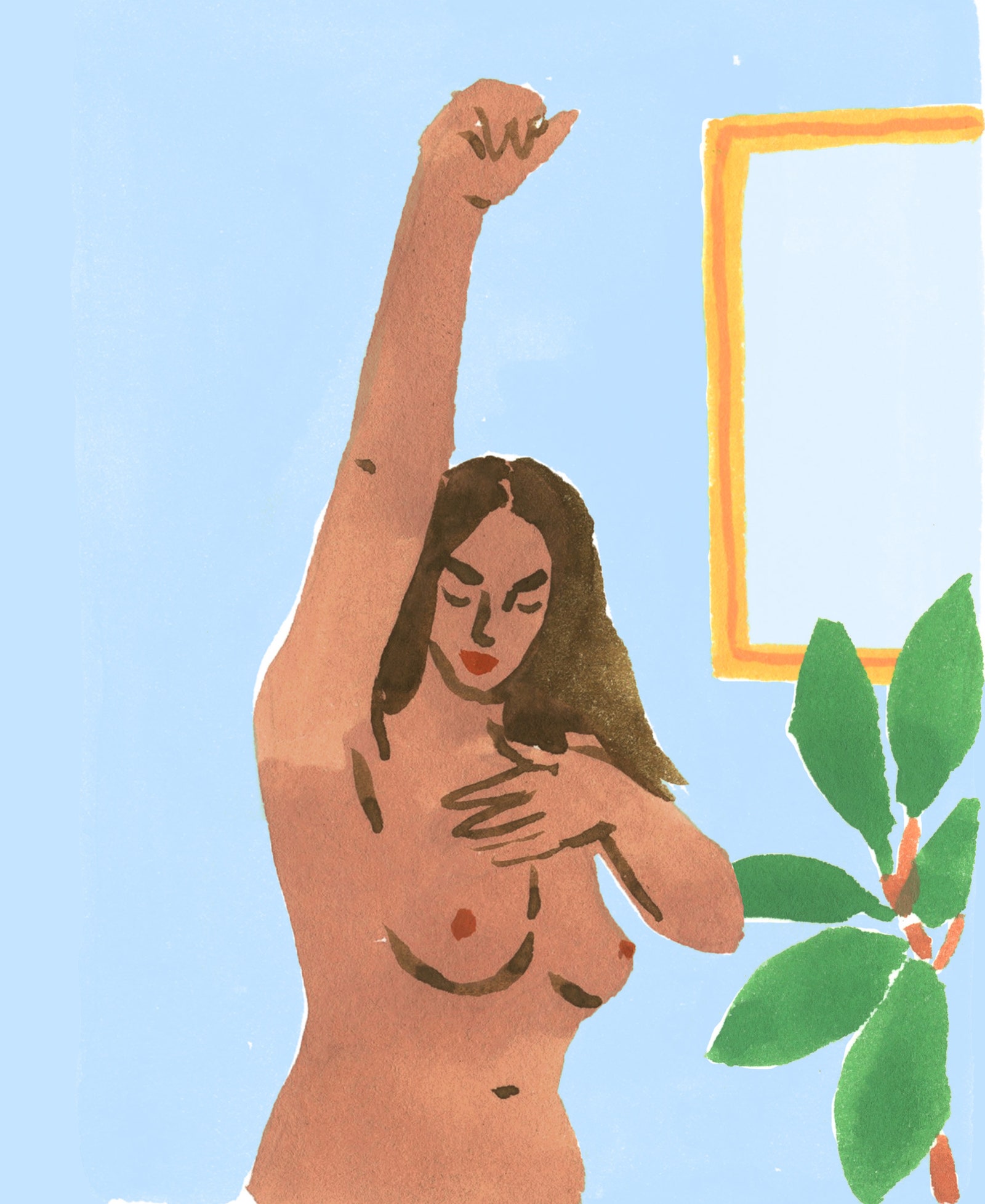 You can feel your breasts in multiple positions (lying down, sitting down, or standing up), or pick one — as long as you do it the same way and in the same place each time. "We want to keep this simple," Boolbol says. "It's a visual inspection of the breast and then the exam. Whether you want to do the exam standing or sitting, it does not matter. The point is do it the same way every month."

It's important to note that self exams are not substitutes for clinical screenings. Mammograms are another important step in detection. (While the guidelines vary, many experts say women without family histories of breast cancer should get their first mammograms at the age of 40.) "The majority of [breast] cancers detected in our country are detected on mammograms," Boolbol says. "They are not detected by self breast exams. If they are detected by self breast exams, it means that it's typically a little larger, and we would prefer to diagnose them smaller."

That said, self exams can still be a valuable tool in detection. Don't rely on them as the only tool, however — and don't panic if you notice anything out of the ordinary. "We're very careful to say, 'That’s a sign of cancer,' because these things don’t have to be cancer," Boolbol says. “They can just be something else going on with the breast… Most things that a woman will detect on her own — [like] masses [and] changes in the appearance — are not cancer.”

A doctor can help you determine what's going on if you notice anything out of the ordinary. Next month, it's back to step one to repeat the process.