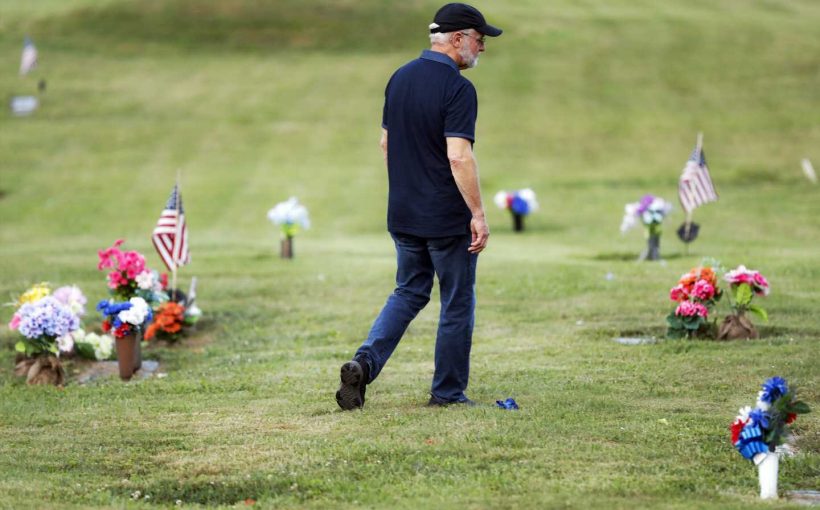 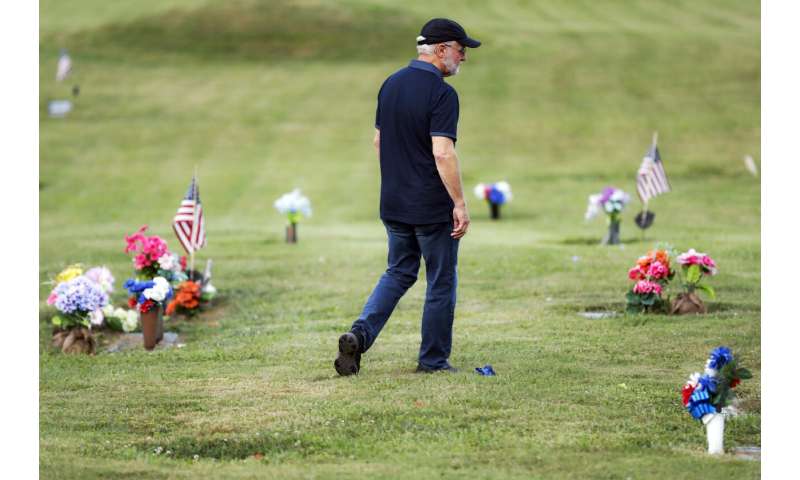 The numbers are staggering: An average yearly total of 107 opioid pills per resident were distributed over a seven-year period in this rural county deep in Appalachia.

The newly released federal data is shocking even to people who live here in Jackson County, where nearly everyone seems to have known someone who died from drug-related causes. Five children in one elementary school class were said to have lost a parent to an overdose death this past academic year.

Standing at his son’s grave in Coalton, a village of fewer than 500 people, Eddie Davis remembers vividly his last conversation, in his home nearly 10 years ago, with the son he called Bub, “not knowing that would be the last time I would see him or hear his voice or be able to hug him.”

“My son was accountable for himself; he did what he did, he chose to do that,” Davis, 67, said Wednesday.

But then he wondered aloud about the role of the drugmakers, and those who did the overprescribing. “Again, how did the drugs get here, how did the pills get here, who is responsible for it? I think they should pay.”

The outsized numbers of prescription pain pills have helped fuel many heartbreaking stories of overdose deaths like Davis’. They’ve also contributed to uneven addiction recovery and surging foster care rates as parents lose their children or leave them orphaned.

“When I was an addict, this town was misery,” said William Carter, who struggled with an addiction to pain pills, and then heroin, for more than a decade. “It was nothing but trying to hustle to make your next fix.” 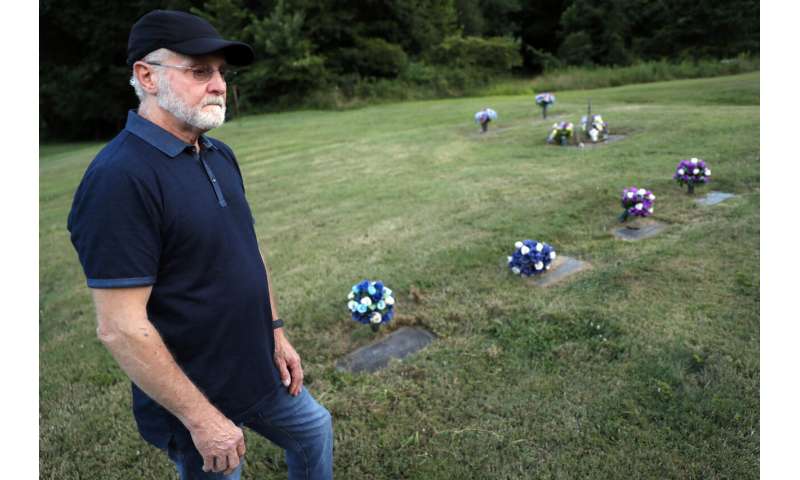 The 42-year-old resident of Jackson, the county seat, started on pain pills in 2000, then later turned to far cheaper and more available heroin as law enforcement crackdowns reduced the availability of pills.

Carter said his life “was pure hell. It was just trying not to be sick. It was shooting up in every gas station bathroom in this town,” he said. “When I think about that, it disgusts me.”

Such stories are all too common here.

“Essentially, there is no segment of our communities that are not impacted by this,” said Robin Harris, executive director for a governmental board that helps provide addiction and mental health services in the region.

Treatment centers and psychiatric hospital beds are full, and while churches and faith organizations are helping the government and agency efforts, resources don’t stretch nearly far enough in an impoverished area, said Harris. She said that in the elementary class of 53 children, the five who experienced the deaths of parents from overdose included a boy who was alone with his dead father for 12 hours because he had no telephone service to call for help.

Census data shows nearly one in five of the county’s more than 32,000 residents live in poverty in a region that has long lagged behind the rest of the nation economically as a result of losing coal, iron and steel industry jobs.

“It’s amazing how many young adults have told me across the podium what the cost of their habit is daily. And you think, ‘I wouldn’t be able to spend $250 a day. Where do they get that?'” 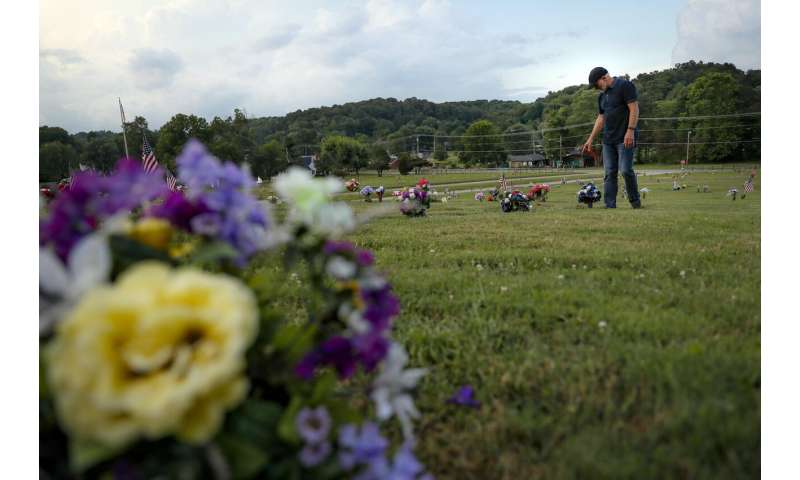 Musick said many county residents are disabled by addiction—struggling to keep jobs and support their children.

“The amount of grandparents raising grandkids in that area is just unbelievable,” said state Rep. Ryan Smith, a Republican whose district includes Jackson and Gallia counties.

The drug data released this week by a federal court in Cleveland shows that drug companies distributed 8.4 billion hydrocodone and oxycodone pills to commercial pharmacies in 2006 and 12.6 billion in 2012. That’s an increase of over 50%.

Records kept by the federal Drug Enforcement Administration show that 76 billion oxycodone and hydrocodone pills—the vast majority of them generics, not brand names—were shipped to U.S. pharmacies from 2006 to 2012. The data was reported first by The Washington Post, which had sued along with HD Media to obtain the data. During that time, prescription opioids contributed to more than 100,000 deaths in the United States, according to the U.S. Centers for Disease Control and Prevention.

The distribution database is a key element of lawsuits filed by more than 2,000 state, local and tribal governments. The first trials are scheduled for October.

A spokeswoman for one distributor, McKesson Corp., said Wednesday it didn’t push sales or influence the numbers of prescriptions or use. McKesson distributed more than 18% of the nation’s opioids from 2006 to 2012, the most of any company.

For those on the front lines, the drug companies’ roles in the epidemic are infuriating. 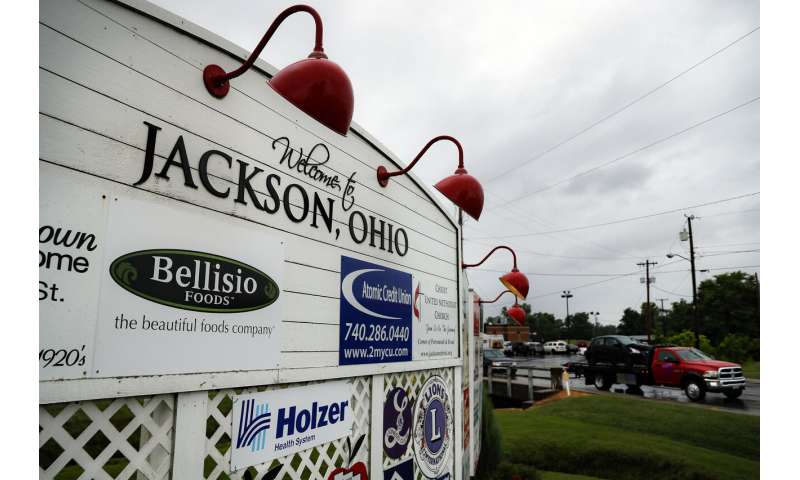 The federal data showed that on average, 175 pills a year per person were distributed in Perry County during the period covered.

Engle said that in his two decades of law enforcement he’s watched as prescription painkillers flooded his community, causing widespread addiction. Every family has felt it, he said. He has relatives struggling with addiction. He’s buried high school friends to overdoses.

The drug companies should “have to come down here and rebuild this place,” Engle said.

In West Virginia, Mingo County was among the hardest-hit rural areas with a rate of 203 pills per person per year. Tommy Preece, volunteer fire chief in the town of Kermit, doesn’t need to see the statistics to know the area’s history of drug problems.

He lost his brother, assistant fire chief Timmy Dale Preece, to a drug overdose in August 2017.

“I’ve seen so much of it, it’s unreal,” he said Wednesday, adding: ” I don’t see no end to it as long as these pharmaceutical companies are going to keep shoving these pills out there.”

Carter, the recovering pain pill and heroin user in Jackson, says he feels fortunate to have a job, a marriage, and “a beautiful 13-year-old daughter.” But he’s also scared for his daughter growing up in the area, as he sees the region’s misery continue.