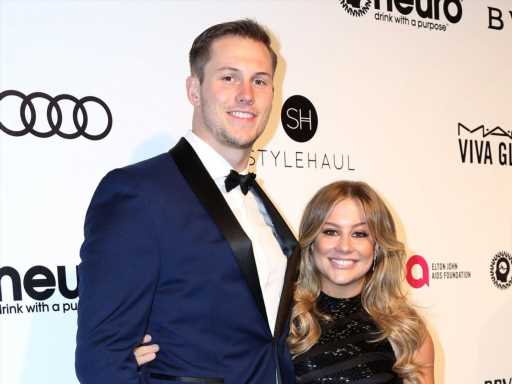 New parents know that having two kids within two years means every day is an adventure, but it seems Shawn Johnson East and her husband Andrew East are taking it all in stride. The couple are celebrating baby Jett‘s first Christmas, sharing the sweetest holiday photo of the entire family in matching festive pajamas ahead of the holiday.

Posing in front of their front door, which is expertly decorated for the season, the former Olympic gymnast captioned the picture, “East Family Christmas… that’s a WRAP 🎁 (also… Jetter and Drew are almost the same size).”

Of course, the caption reveals two adorable tidbits about her little one, including his precious nickname (“Jetter”), and the fact that he’s growing so fast, he’s nearly as big as their daughter Drew Hazel, who celebrated her second birthday in October.

As plenty of parents to toddlers these days can likely relate to, it seems Drew is all about Frozen these days — in fact, in the photo, she’s donning her very own Elsa braid in honor of the beloved Disney character. And along with dressing up as Elsa for Halloween back in October, her dad even took his baby girl to meet the real Anna and Elsa in person recently, sharing the most delightful videos of her excitedly running up to the pair in her matching Frozen gown.

She’s seemingly such a big fan of the frosty duo that she totally ignored Aurora from Sleeping Beauty nearby… now that’s devotion.

Here’s hoping the family of four has an awesome Christmas and that Santa brings their two little ones everything they’ve been hoping for.

These other famous parents have been open about suffering miscarriages.