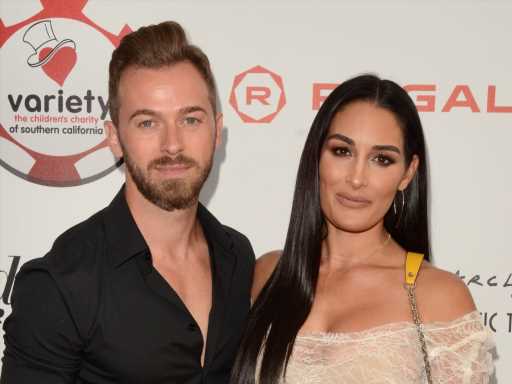 In an Instagram post shared last night in advance of the ABC primetime show’s 30th season premiere, Bella included one still shot of 13-month-old Matteo sitting sweetly next to the DWTS trophy his dancer dad won last season with partner Kaitlyn Bristowe. Swipe left, however, to see a video of what happened when Bella encouraged her son to cheer for Chigvintsev and his new dance partner Melora Hardin.

Bella tried to stick the letters back on with no success. “Shoot,” she said with a laugh. “I will fix that before you get home.”

Then, Matteo did what toddlers love to do and attempted to use the fancy gold letters as a teething ring. “Oh no, baby!” Bella told him, taking the piece out of his mouth.

Bella tried to get her video back on track with well wishes for Chigvintsev and Hardin, imploring fans to vote for the couple. She also tried to get Matteo to apologize and say that he would fix the trophy. Unsurprisingly, the toddler did not comply, and in fact tried to eat the gold letters yet again.

“Teo and I will get your trophy fixed!!!” Bella wrote to her husband in the caption of the Instagram post. “Lol Oooppss ha! We gotta a strong boy here!!”

Luckily, Chigvintsev didn’t seem to be angry. “Love you both so so much and I guess dad needs to get a new trophy this season,” he commented on his wife’s post.

These are some of the reality-TV alumnae we love to follow as they tackle motherhood.