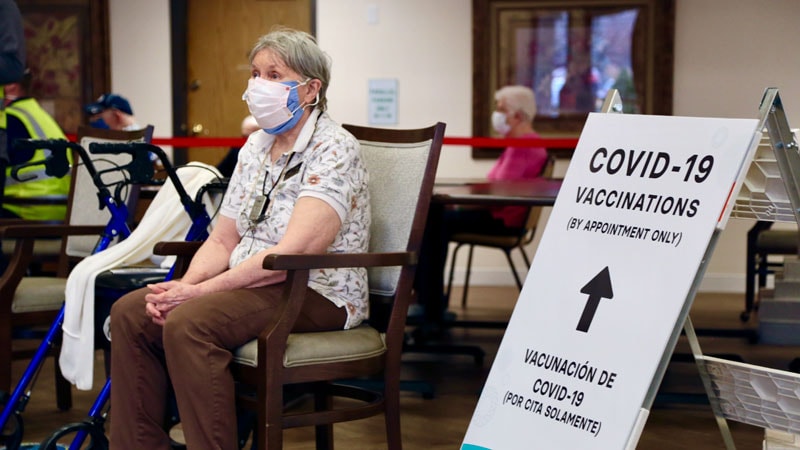 Each afternoon, Cyrus Shahpar, MD, the data guru for the White House COVID-19 Response Team, sends an email to staffers with the daily count of COVID-19 vaccinations delivered in the United States.

The numbers, collected from states ahead of the final figures being posted on the Centers for Disease Control and Prevention (CDC) website, act as a report card of sorts on the team’s efforts.

On Saturday, April 3, it was a new record: 4.1 million vaccinations delivered in a single day, more than the total population of some states.

While the United States has a long way to go before it is done with COVID-19, there’s finally some good news in the nation’s long and blundering slog through the pandemic.

After a rocky start in December and January, vaccination is happening faster than nearly anyone thought possible. As more people see their friends and family roll up their sleeves, hesitancy is dropping, too.

In settings where large numbers of people are vaccinated, such as nursing homes, COVID-19 cases and deaths have plunged.

Those gains, however, haven’t been shared equally. According to CDC data, 69% of people who are fully vaccinated are White, while just 8% are Black and about 9% are Hispanic, a group that now represents most new COVID-19 cases.

Officials say that’s partly because the vaccines were rolled out to the elderly first. The average life expectancy for Black people in the United States is now age 72, which means there were fewer people of color represented in the first groups to become eligible. Experts are hopeful that underrepresented groups will start to catch up as more states open up vaccinations to younger people.

Based on overall numbers of daily vaccine doses, the United States ranks third, behind China and India. America ranks fourth — behind Israel, the United Kingdom and Chile — in the total share of the population that’s been vaccinated, according to the website Our World in Data.

It’s a stunning turnaround for a country that failed for months to develop effective tests, and still struggles in some quarters to investigate new cases and quarantine their contacts.

The 7-day rolling average of vaccines administered in the United States is currently more than 3 million a day.

“We knew that we needed to get to 3 million a day at some point, if we were going to get most people vaccinated this year, but I don’t think that most people expected it to happen this early,” said Eric Toner, MD, a senior scholar with the Johns Hopkins Center for Health Security in Baltimore, Maryland.

Before taking office, President Joe Biden pledged to get 100 million shots in arms within his first 100 days in office. After hitting that goal in late March, he doubled it, to 200 million vaccinations by April 30. After first saying all adults should be eligible to get in line for the vaccine by May 1, on Tuesday, he bumped up that date to April 19.

Some media reports have seen this repeated moving of the goalposts as calculated — an unstated strategy of underpromising and overdelivering with the aim of rebuilding public trust.

But others point out that even if that’s true, the goals being set aren’t easy, and hitting them has never been a given.

“I think the Biden administration really gets a lot of credit for pushing the companies to get more vaccine out faster than they had planned to,” Toner said. “And the states have really responded as well as the federal government in terms of getting vaccination sites going. So we’re not only getting the vaccines, we’re getting it into people’s arms faster than expected.”

“We’re doing an amazing job, and I think the US is really beginning to bend the curve,” said Carlos del Rio, MD, an infectious disease specialist and distinguished professor of medicine at Emory University in Atlanta, Georgia.

“I think overall it’s just that everybody’s putting in a ton of work to get it done,” he said.

On Saturday, the day the United States hit its vaccination record, he was volunteering to give vaccinations.

“I mean, of all the bad things we do to people as clinicians, this is one thing that people are very happy about, right?” del Rio said.

He said he vaccinated a young woman who asked if she could video chat with her mom, who was feeling nervous about getting the shot. He answered her mom’s questions, and later that day, she came down to be vaccinated herself.

The White House COVID-19 Response Team has worked hard to better coordinate the work of so many people at both the federal and state levels, said Andy Slavitt, senior adviser for the team, in an interview with Medscape Medical News.

“We view it as a war, and in a war, you do everything: You bring experienced personnel; you bring all the resources to bear; you create multiple routes,” Slavitt said. “You don’t leave anything to chance.”

Among the levers the administration has pulled, using the Defense Production Act has helped vaccine manufacturers get needed supplies, Slavitt said.

The administration has set up an array of FEMA-run community vaccination centers and mobile vaccination sites to complement state-led efforts, and it’s activated a federal health law called the Public Readiness and Emergency Preparedness (PREP) Act, which provides immunity from liability for retired doctors and nurses, among others, who sign up to help give vaccinations. That’s helped get more people into the field giving shots.

The administration also canceled a plan to allocate vaccines to states based on their pace of administration, which would have punished underperforming states. Instead, doses are allocated based on population.

In a media call on April 7, when asked whether the administration would send additional vaccines to Michigan, a state that’s seeing a surge of COVID-19 cases with more transmissible variants, Slavitt said they weren’t managing vaccine supply “according to some formula.”

He said they were distributing based on population “because that’s fundamental,” but were also locating vaccines “surgically in places that have had the greatest disease and where people have the greatest exposure.”

He said sites like community health centers and retail pharmacies have the power to order vaccines directly from the federal government, which helps get more supply to harder-hit areas.

“I’ve seen photographs…of people breaking down in tears when they get their vaccine, people who are giving standing ovations to active military for taking care of them,” he said, “and I think about people who have gone for a long time without hope, or who have been very scared.”

“It’s incredibly encouraging to think about maybe a few million people taking a step back to normal life again,” he said.