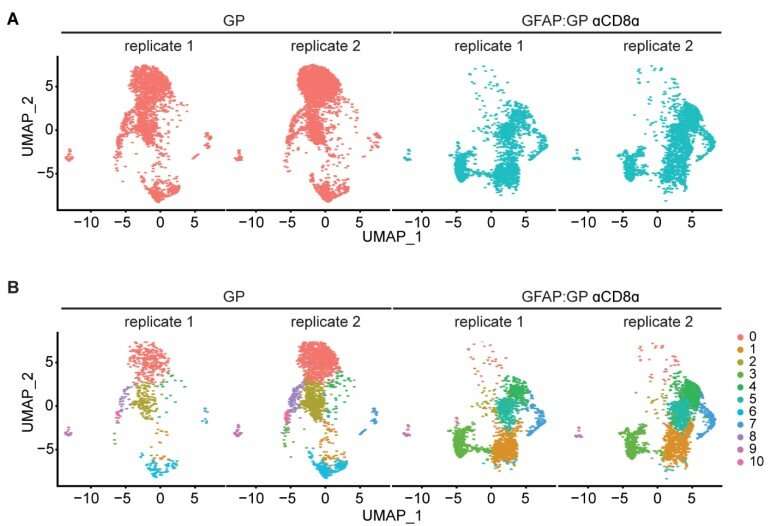 Intriguing new research has pinpointed a special population of T cells—tissue-resident memory T cells—as key players in the development of chronic autoimmune disorders that affect the central nervous system, opening a new window of understanding into conditions such as multiple sclerosis and many others.

Tissue-resident memory T cells—technically known as CD8+ TRM cells—are also more familiarly called squatters, or squatting T cells. As the latter name implies, these cells are squatters in specific sites throughout the body, lifelong residents in tissues they are supposed to protect.

But researchers writing in Science Translational Medicine are revealing how these cells, critical constituents of the immune system, can become unrelenting turncoats—persistent, damaging and debilitating. They play a role in the devastating inflammation that characterizes chronic autoimmune diseases of the central nervous system.

These disorders include conditions such as multiple sclerosis and autoimmune encephalitis, both of which are marked by persistent waves of inflammation and damage to nerve cells. Other, rarer inflammatory conditions also fall into this category of disorders, namely neuromyelitis optica and anti-myelin oligodendrocyte glycoprotein antibody disease. A common thread linking one disorder to the other is a persistent inflammatory state.

A flurry of earlier studies suggested that squatting T cells can trigger the damaging inflammation invariably seen in autoimmune nervous system disorders. Aberrant squatting Ts additionally have been identified as the underlying cause of other inflammatory conditions, such as lupus and psoriasis. Missing, however, has been concrete evidence confirming that rogue squatting T cells—the CD8+ TRM cells—were the key culprits in inflammatory autoimmune conditions regardless of the tissues under attack.

Demyelination is a feature of the central nervous system disorders, a loss of the insulating fatty sheaths that protect nerves, a loss that makes multiple sclerosis an extraordinarily complex condition. The bombardment of myelin, the fatty coating that envelopes nerve cells, is caused by inflammatory processes of an immune system out of control. The new research shows how a turncoat immune system can result in a lifelong autoimmune central nervous system disorder.

“Tissue-resident memory T cells represent a potentially important cellular player in this process,” reports Dr. Ilena Vincenti of University of Geneva’s department of pathology and immunology, and lead author of an investigation into the role of squatting T cells. Vincenti and colleagues wanted to examine two critical activities: how squatting T cells responded to an infectious agent and why a highly activated warrior state continued after the infection cleared.

The research provides a lesson in how tissues molecularly identified as “self” can be relentlessly attacked by cells that betray the body. How to switch off traitor cells defines the next steps proposed in the Swiss series of studies.

Working with colleagues at the University of Geneva, and elsewhere in Switzerland, the team relied on a specialized mouse model bred for neuroinflammatory responses. Swiss researchers also studied biopsied specimens from patients with inflammatory central nervous system disorders. The aim was to better understand the role of rogue T cells in inflammatory autoimmune diseases and to investigate the persistence of aberrantly activated T cells in these disorders.

Vincenti and colleagues created the new mouse model by transiently infecting the animals with the attenuated lymphocytic choriomeningitis virus. Although the mice cleared the infections, the scientists found that CD8+ T cells—squatting Ts—reactivated in response to viral antigens that were retained by nerve cells.

The reactivated squatting T cells then triggered inflammation and damage to nerves, but only in the presence of CD4+ T cells. Their findings revealed that the nerve damage wasn’t relegated only to mice. The team observed activated T cells in lesions from patients with chronic and progressive multiple sclerosis and neuromyelitis optica spectrum disorder.

As unique as Vincenti’s research seems, it coincides with a similar analysis led by Dr. David Frieser of the Toulouse Institute for Infectious and Inflammatory Diseases at the University of Toulouse in France. That research, which was also reported in Science Translational Medicine, essentially asked many of the same questions posed by Vincenti and her collaborators.

Collectively, the findings of both studies shed light on the elusive mechanisms behind inflammatory autoimmune disorders of the central nervous system. Both teams conclude that manipulating these aberrant—and persistent—T cells may offer a new therapeutic approach for these devastating conditions.