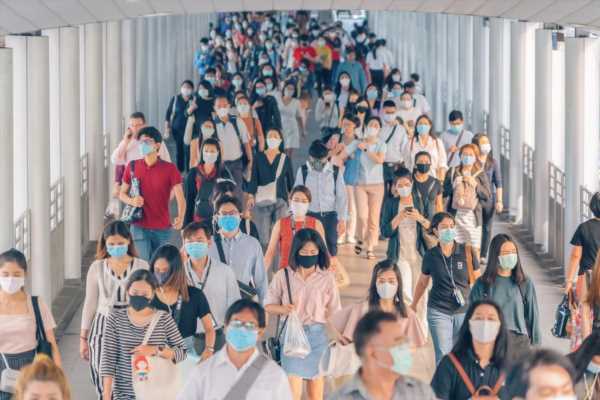 In the past, studies have indicated that the virus concentration in a room when infected humans exhale aerosols can be determined by combining the viral load in the lungs and throat with the known emissions of respiratory aerosols.

Other factors such as the size of the room, air exchange rate, and half-life of the virus when it is airborne also impact the viral emission strength.

A current study used a Monte Carlo model to describe the expected distribution of viral emission by an infected population of people who were either silent, speaking softly, or loudly. It also published a spreadsheet-based tool for the assessment of indoor airborne transmission of SARS-CoV-2 concerning room and ventilation parameters, different vocal and physical activities, and the types of masks worn by the emitter and the receiver.

The tool was further updated by the addition of a recirculating air purification parameter and a CO2 simulator.

However, these initial models were developed for the wild type (WT) of the virus. With time several variants of SARS-CoV-2 have emerged, the Delta (B1.617.2) variant and the recent Omicron (B.1.1.529) variant having higher transmissibility.

Available data suggested that the viral loads of these variants were higher than the WT. The viral load of Omicron was reported to be ten- to one hundred-fold higher than that of Delta. Furthermore, the number of cells infected for a given number of ribonucleic acid (RNA) virus copies were found to be doubled and quadrupled for Delta and Omicron respectively.

The critical dose of virus copies beyond which it is said to be infectious was reported to be 500 for the WT while it was 300 copies for Delta and 100 copies for Omicron. Also, the immune evading property of Omicron was found to be higher as compared to Delta and WT.

A new study published in Swiss Medical Weekly aimed to determine the risk from higher viral loads and infectivity associated with the new variants of concern for SARS-CoV-2 by estimation of high, very high, and super-emitting individuals in a population along with the impact of a lower critical dose.

The study involved modeling the variants of concern using random sampling. A near-field/far-field well-mixed model was used for the estimation of emission rates for viruses in aerosols when a person is either silent, talking softly, or talking loudly. Several factors such as vocal loudness, room characteristics, average air velocity, air exchange rate, and degree of physical activity and mask types worn by the emitter are then combined with the half-life of the virus for determination of viral load after a given time along with the time required to reach the critical dose.

Furthermore, in the updated version the single air exchange term was replaced by outdoor air supply and recirculating air-cleaning devices. Also, a CO2 calculator was added to the tool for the determination of CO2 concentration at quarter-hourly intervals as well as when leaving the room.

The results indicated that the emergence of the variants of concern led to an increase in the frequency of super-emitting individuals. During the circulation of WT, the super-emitters were reported to be 1 in 1000 infections while during Delta it was 1 in 30 and during Omicron it was 1 in 10 or 20. Moreover, the frequency of high and very high emitting individuals also increased for Delta and Omicron as compared to WT.

The results also reported that the Omicron and Delta variants had much higher infectivity and lower critical dose as compared to the WT and cannot be controlled by wearing surgical masks. For Delta and Omicron, FFP2 respirators were found to provide sufficient protection rather than surgical masks. However, even FFP2 respirators were found to be ineffective in case of prolonged exposure to extreme aerosols.

The current study, therefore, demonstrates that higher viral load along with higher infectivity leads to the rapid spread of Omicron and Delta. However, there are other ways by which variants can affect transmission such as altered mucus viscosity and increased viral production near the vocal cords. Further research needs to be done to address such questions.