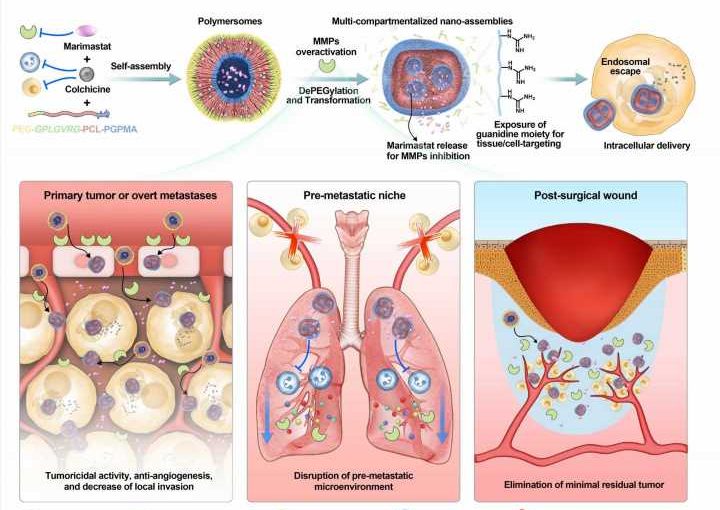 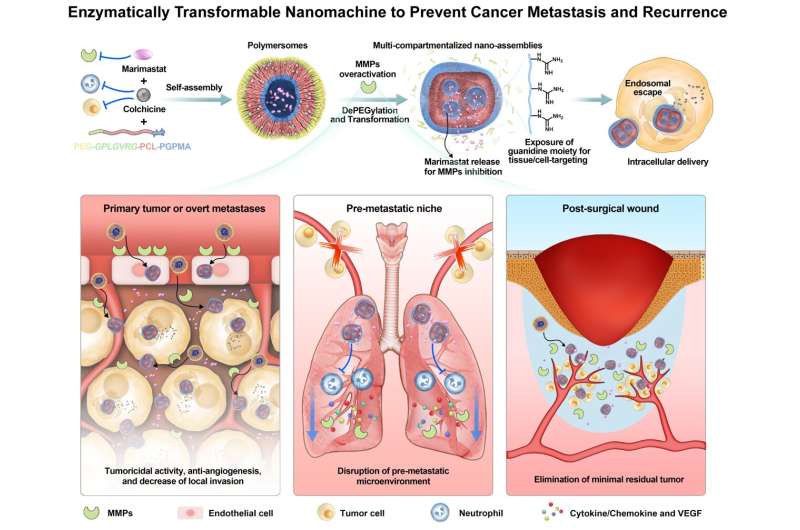 A group of researchers has created nanomachines that detect MMPs (matrix metalloproteinases), a principal enzyme for cancer cells to invade normal tissue, and deliver anticancer drugs according to an announcement in the journal Advanced Materials . As it can target highly invasive cancer cells, it is expected to inhibit cancer metastasis and recurrence.

Malignant tumors display characteristics of metastasis, recurrence, and invasion, and preventing them is the most effective treatment. When cancer cells metastasize, they need to pass through (invade) normal tissues, and in doing so, they use extracellular proteases (proteolytic enzymes) called MMPs to destroy the fibrous tissue (matrix) that binds cells to cells and tissues to tissues. In this study, we focused on tissues and cells that overproduce MMPs and incorporated the cell division inhibitor colchicine and the MMP inhibitor marimastat into MMPs-responsive polymersomes as an enzymatically transformable nanomachine (ETN). The ETN was designed to possess an amino acid sequence that serves as a specific cleavage site for MMPs and thus be capable of releasing the PEG and exposing the guanidine residue after cleavage. In the drug uptake experiment using human fibrosarcoma-derived HT1080 cells, we found that the fluorescently labeled ETN (Cy5-ETN) had a 10-fold higher uptake than that of an inert vehicle without enzymatic transformation behavior. High cellular uptake enabled strong cytotoxicity of colchicine-loaded ETN with IC50 = 0.015 μM compared to the inert vehicle with IC50 = 0.402 μM.Observation of mice treated with ETN using confocal laser scanning biomicroscopy showed no leakage out of blood vessels in the auricle and normal liver; strikingly, the nanomachines were found to extensively invade the tumor-associated tissues in breast cancer with high MMP expression.

In pharmacological experiments with mice, we evaluated the antitumor effect for primary and secondary tumors using MDA-MB-231/LM2 (human) and 4T1 (mice) triple-negative breast cancer models. As a result, the ETN simultaneously encapsulating with colchicine and marimastat had a strong antitumor effect and prolonged survival in both triple-negative breast cancer models. In addition, on the basis of metastasis-prone phenotype of this model after orthotopic transplantation, the ETN was also confirmed to efficiently inhibit lung metastasis because of residual tumor targetability. Our results prove an applicable technology for not only to cancers but also to other diseases with high expression of MMPs.