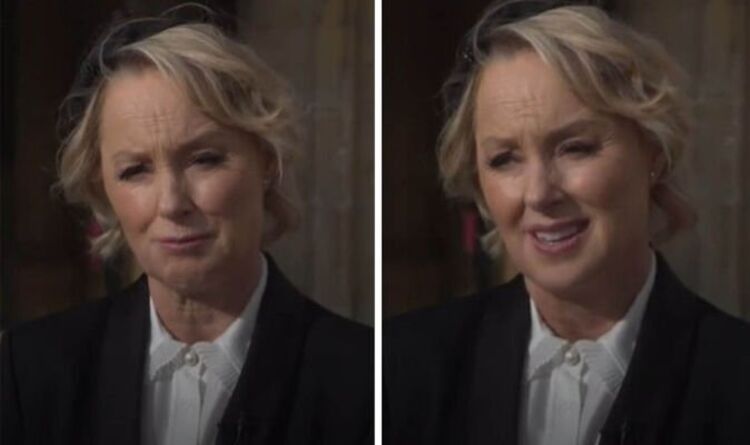 After being cruelly mocked by internet trolls, Evers used a video on social media to prove that Dynevor, 58, could skate on her own. The professional skater also added that with a hectic work schedule, finding time to train with the actress is getting harder and harder. However, Dynevor, who has played Coronation Street’s Sally Webster since 1986 is used to hard work and challenges, which she proved after battling breast cancer back in 2010.

In an unlikely and slightly cruel twist of fate, Dynevor’s character Sally was facing breast cancer within the ITV soap. But soon after filming the storyline, Dynevor was handed the same cruel diagnosis.

Appearing on Loose Women back in 2020, Dynevor said her diagnosis came as the “biggest shock”, and that she would never have got her breasts checked if it wasn’t for the storyline on Coronation Street.

Admitting that she “never thought it would happen” to her, after her diagnosis, Dynevor had to endure a gruelling six-month battle involving chemotherapy after the disease spread to her lymph nodes.

Looking back on her ordeal and subsequent recovery from the disease, Dynevor told RTE: “I just want to say that because women out there might go, ‘Well, it’s not going to happen to me,’ because that’s what I used to say.

“I thought, ‘It won’t happen to me, I’m really healthy and I run.’ And I just thought, ‘It’s not going to happen’ and it did.

“I can’t stress this enough, I never thought this would happen to me.”

The star went on to explain that she had a “tiny“ lump, that turned out to be cancer, six months before getting diagnosed, as she was sure she was okay.

“I had that lump I think probably for six months, when I look back, but I was so in denial about it. I thought I was fine,” she continued to explain.

“I think that’s our defence mechanism in life, that you think, ‘It’s not going to happen to me, therefore I won’t address the issue’.”

The NHS states that a remarkable one in eight women are diagnosed with breast cancer during their lifetime. It is for this reason that the medical body stresses that women check their breasts regularly for any changes and to get the opinion of a GP if they are concerned.

For Dynevor, raising awareness is also hugely important, as she strives to prevent future generations from ignoring their health concerns.

The actress added: “The one thing I want to say is that it’s really important we know the signs and symptoms of breast cancer. We all have to check.

“I’ve got two girls. For our future, we need to be helping with research for this so we find out who’s going to get it in the future and how we can prevent it.”

In contrast to some beliefs, pain in the breast is not usually a symptom of cancer. But the critical signs and symptoms to spot that could indicate you have the condition include:

Opening up about her diagnosis, Dynevor said that she “cried like [she’d] never cried before”. Speaking to Hello! the actress added: “It was uncontrollable sobbing.

“I didn’t want to die. I would hate to be sat on a fluffy cloud looking down on them. I couldn’t cope with that. I had to be there to see them grow up.”

The other, known as non-invasive breast cancer, is found in the ducts of the breast rather than in the breast tissue. Due to this there is rarely a breast lump. This type of breast cancer is usually found during a mammogram.

Through surgery, Dynevor had her lymph nodes removed followed by a lumpectomy and chemotherapy in order to treat her cancer. These are all common ways in which to treat breast cancer. Most women with breast cancer have an operation as part of their treatment.

Although breast cancer cannot be prevented, the NHS advises that by following a healthy balanced diet and exercising regularly, women can help prevent many health conditions, including heart disease, diabetes and many forms of cancer. However it is important to note that there are no definite conclusions between breast cancer and diet.