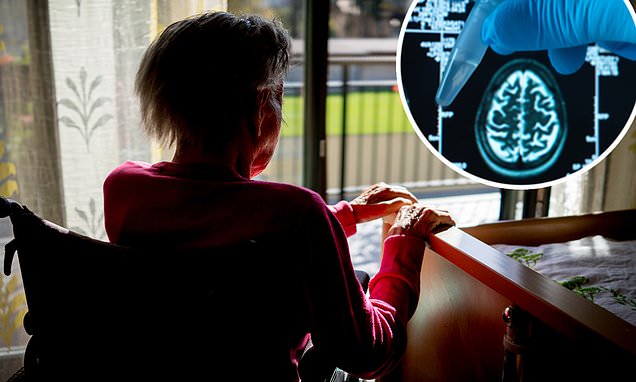 Boosting levels of a specific protein in blood cells could stave off symptoms of Alzheimer’s by minimizing oxygen deprivation in the brain, mouse study finds

A protein in red blood cells could have the ability to prevent aging in the brain, a new study suggests.

In research on mice conducted at the University of Texas, scientists discovered that mice whose brains were missing this protein – called ADORA2B – were more likely to experience cognitive decline as they got older.

But rodents that did have high levels of ADORA2B had slower memory declines, less inflammation and could hear more easily.

If these results are replicated in humans, the team says this protein could be used as the basis for treatment for Alzheimer’s and other forms of dementia. 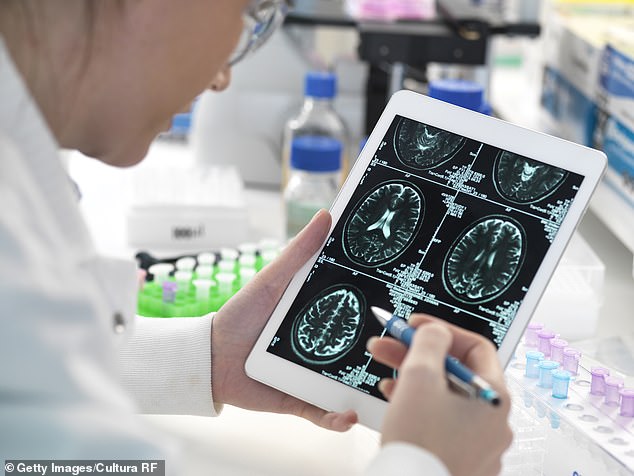 A protein that helps get oxygen to the brain may be key to preventing cognitive decline, a new study finds (file image)

As life expectancies increase around the world, more elderly people are facing issues with their memories and thinking abilities.

Cognitive decline can lead seniors to lose the ability to perform daily living activities independently such as getting dressed or using the bathroom.

The condition is very common among the aging population  but poorly understood.

Past research has focused on genetic factors that might predispose a person to experiencing cognitive decline as they get older, but the new study  focused instead on red blood cells involved with delivering oxygen to the brain.

Alzheimer’s disease is a progressive brain disorder that slowly destroys memory, thinking skills and the ability to perform simple tasks.

It is unknown what causes Alzheimer’s. Those who have the APOE gene are more likely to develop late-onset Alzheimer’s.

The study – published Thursday in PLOS Biology – revealed an ‘anti-aging’ protein that helps prevent cognitive decline. This protein might be a starting point for future treatments.

Cognitive decline is well-known to be associated with hypoxia, or low levels of oxygen, in the brain.

The brain relies on oxygen to generate energy and keep neurons running. Even a few minutes of oxygen deprivation for this crucial organ can trigger significant injury, and long-term oxygen deprivation can lead to permanent brain damage.

One common hypothesis among neural scientists poses that aging leads to a decrease in brain oxygen.

This in turn leads to swelling and other cellular changes in the brain – causing the brain to lose its ability to process thoughts and memories.

Oxygen deprivation also leads to issues with hearing, another sign of cognitive decline.

The University of Texas researchers found that adenosines, a common group of proteins that regulate brain function, are involved with regulating oxygen deprivation.

Their study focused on one specific adenosine, called ADORA2B.

After just six months, they saw significant differences between the two groups.

Mice without the protein had memory issues – they were less able to solve cognition puzzles than the normal mice.

ADORA2B helps get oxygen to the brain – and prevents the brain from aging – the researchers found.

Their paper calls the protein a ‘key component for anti-aging and anti-age-related functional decline.’

When mice do not have this protein, they’re more likely to see learning issues, memory issues, and hearing issues as they get older. 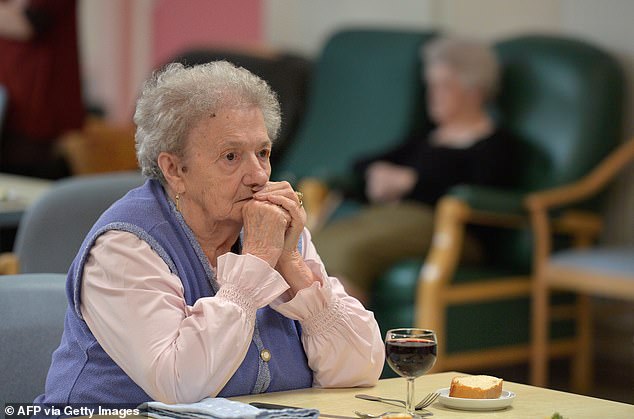 Getting oxygen to the brain is key in preserving cognitive function. Pictured: A woman with Alzheimer’s looks on during lunch in a retirement home

Past research has shown that injecting blood plasma from younger mice to elderly mice can rejuvenate cognitive abilities for the older mice.

This study suggests that such treatments may be even more effective if they focus on using the ADORA2B protein.

However, this research was done in mice – and research in mice brains often does not translate to human brains.

Future studies will need to identify possible treatments and test them in humans. Still, this paper provides hope for millions of dementia patients who currently lack treatment.

‘Red blood cells have an irreplaceable function to deliver oxygen to maintain bioenergetics of every single cell within our body,’ said Dr Yang Xia, lead author on the study, in a statement

‘However, their function in age-related cognition and hearing function remains largely unknown.’