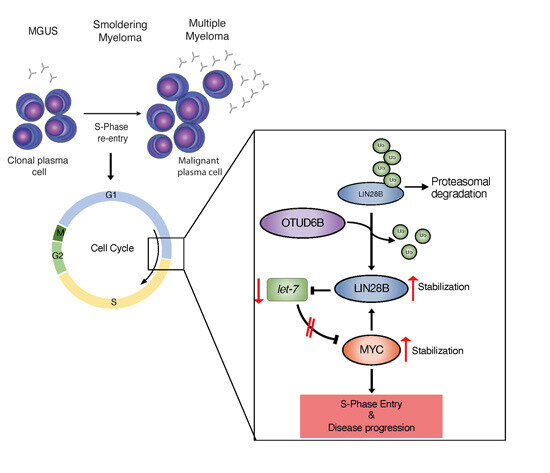 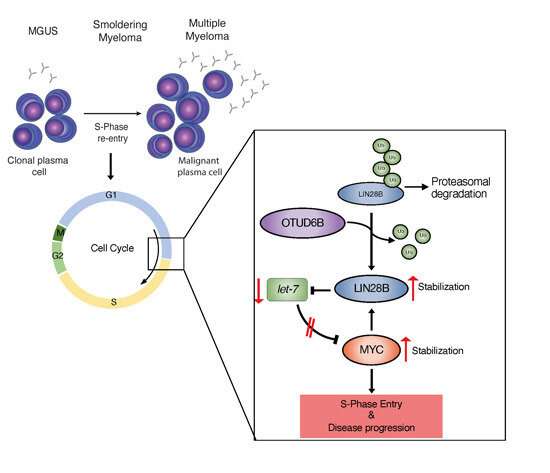 Multiple myeloma (MM) is the second most common type of blood cancer. It attacks the plasma cells in the blood. A team at the Technical University of Munich (TUM) has now discovered a mechanism which provides indications of when and why these cells become aggressive.

The team is still conducting basic research; in the future their findings could also help in the development of medications. Multiple myeloma is today still considered incurable, with survival prognoses for victims averaging only about five years.

In Germany approximately 3,700 men and 3,200 women develop multiple myeloma each year. The signs and symptoms range from bone pain and fatigue to confusion. These symptoms are often accompanied by infections, weight loss, weakness or numbness in the legs as well as difficulties with the kidneys.

When do healthy plasma cells turn into cancer cells?

Healthy plasma cells normally help fight infections by forming antibodies which then recognize and attack the pathogen. In the case of multiple myeloma, unhealthy plasma cells accumulate in the bone marrow and displace the healthy blood cells.

“Instead of forming helpful antibodies, now the cancer cells produce abnormal proteins which can cause complications,” explains the head of the study, Prof. Dr. Florian Bassermann, Director of the Clinic and Polyclinic for Internal Medicine III (Hematology / Oncology) at the TUM Hospital rechts der Isar.

For many years now the research team led by Prof. Bassermann has been working on finding indications of when the preliminary stage transforms into multiple myeloma and identifying possible ways to prevent the transition. “So what happens to make the plasma cells degrade?” Bassermann asks.

“We have to understand this process first before we can formulate new approaches for pharmaceutical development.” Bassermann joined with many colleagues, in particular with Dr. Carmen Paulmann and Ria Spallek from the specialty area Hematology/Oncology, to look for an answer.

What bodily processes drive the cancer?

In order to find new possibilities for treating multiple myeloma patients, the team set out to find new vulnerabilities within the Ubiquitin Proteasome System (UPS) which is responsible for protein degradation. In humans this system includes approximately 1,000 genes and controls about 80% of all proteins in the cell. The cancer uses the Ubiquitin Proteasome System to proliferate and develop further. “We assume that defective regulation of this cellular degradation machinery drives the disease and helps it survive.”

Here the researchers were particularly interested in a certain class of enzymes which can inhibit protein degradation, known as deubiquitylases. “These enzymes have attracted a lot of attention in the recent past as pharmaceutically active enzymes, since they can regulate the frequency and activity of proteins relevant to cancer and because their structure makes them responsive to medication-based inhibition,” says Prof. Bassermann, who is also an oncologist.

He and his team have now identified a particular deubiquitylase which could be responsible for the development of the cancer cells. If the deubiquitylase can be successfully deactivated, it could be possible to stop the cancer before it actually develops. The researchers are now intensifying the search for medically active substances which could achieve this.