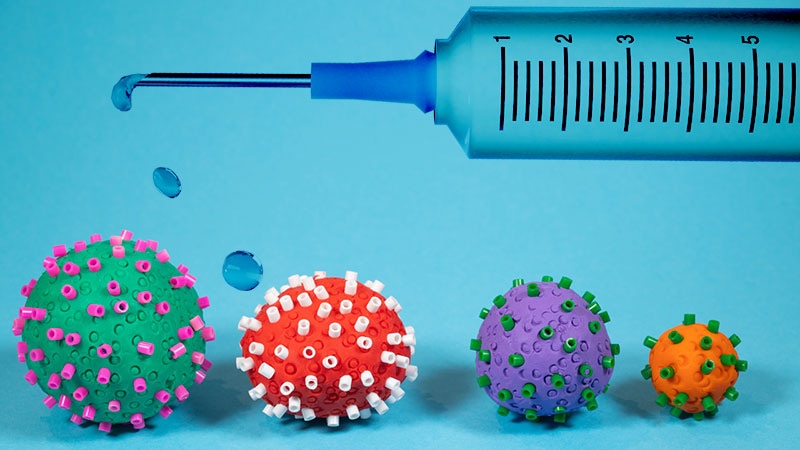 As the COVID-19 pandemic winds down — for the time being at least — efforts are ramping up to develop next-generation vaccines that can protect against future novel coronaviruses and variants. Several projects are presenting clever combinations of viral parts to the immune system that evoke a robust and hopefully lasting response.

The coming generation of “pan” vaccines aims to tamp down SARS-CoV-2, its closest relatives, and whatever may come, into tamer respiratory viruses like the common cold. Whatever the eventual components of this new generation of vaccines, experts agree on the goal: preventing severe disease and death. And a broader approach is critical.

“All the vaccines have been amazing. But we’re playing a whack-a-mole game with the variants. We need to take a step back and ask if a pan-variant vaccine is possible. That’s important because Omicron isn’t the last variant,” said Jacob Lemieux, MD, PhD, instructor in medicine and infectious disease specialist at Massachusetts General Hospital.

The drive to create a vaccine that would deter multiple coronaviruses arose early, among many researchers. An article published in Nature in May 2020 by National Institute of Allergy and Infectious Diseases (NIAID) researcher Luca T. Giurgea, MD, and colleagues said it all in the title: Universal coronavirus vaccines: the time to start is now.

Their concerns? The diversity of bat coronaviruses poised to jump into humans; the high mutability of the spike gene that the immune response recognizes; and the persistence of mutations in an RNA virus, which can’t repair errors.

On September 28, NIAID announced funding for developing ‘pan-coronavirus’ vaccines – the quotation marks theirs to indicate that a magic bullet against any new coronavirus is unrealistic. “These new awards are designed to look ahead and prepare for the next generation of coronaviruses with pandemic potential,” said NIAID Director Anthony Fauci, MD. An initial three awards went to groups at the University of Wisconsin, Brigham and Women’s Hospital, and Duke University.

President Biden mentioned the NIAID funding in his State of the Union Address. He also talked about how the Biomedical Advanced Research and Development Authority (BARDA), founded in 2006 to prepare for public health emergencies, is spearheading development of new vaccine platforms and vaccines that target a broader swath of pathogen parts.

Artem Babaian, PhD, a computational biologist at the University of Cambridge, had the idea to probe National Institutes of Health (NIH) genome databases, going back more than a decade, for overlooked novel coronaviruses. He started the project while he was between jobs as the pandemic was unfurling, using a teltale enzyme unique to the RNA viruses to fish out COVID cousins. The work is published in Nature and the data freely available at serratus.io.

Among the nearly 132,000 novel RNA viruses Babaian’s team found, nine were from previously unrecognized coronaviruses. The novel nine came from “ecologically diverse sources”: a seahorse, an axolotl, an eel, and several fishes. Deciphering the topographies of these coronaviruses may provide clues to developing vaccines that stay ahead of future pandemics.

But optics are important in keeping expectations reasonable. “ ’Universal vaccine’ is a misnomer. I think about it as ‘broad spectrum vaccines.’ It’s critical to be upfront that these vaccines can never guarantee immunity against all coronaviruses. There are no absolutes in biology, but they hopefully will work against the dangers that we do know exist. A vaccine that mimics exposure to many coronaviruses could protect against a currently unknown coronavirus, especially if slower-evolving antigens are included,” Babaian told Medscape Medical News.

Nikolai Petrovsky, MD, PhD, of Flinders University College of Medicine and Public Health in Adelaide, Australia and the biotechnology company Vaccine Pty Ltd, agrees, calling a literal pan-coronavirus vaccine a “pipedream. What I do think is achievable is a broadly protective, pan-CoV-19 vaccine — I can say that because we have already developed and tested it, combining antigens rather than trying just one that can do everything.”

The broader vaccines in development display viral antigens, such as spike proteins, to the immune system on diverse frameworks. Here are a few approaches.

Ferritin nanoparticles: A candidate vaccine from the Emerging Infectious Diseases Branch of Water Reed National Military Medical Center began phase 1 human trials in April 2021. Called SpFN, the vaccine consists of arrays of ferritin nanoparticles linked to spike proteins from various variants and species. Ferritin is a protein that binds and stores iron in the body.

“The repetitive and ordered display of the coronavirus spike protein on a multi-faced nanoparticle may stimulate immunity in such a way as to translate into significantly broader protection,” said Walter Reed’s branch director and vaccine co-inventor Kayvon Modjarrad, MD, PhD.

A second vaccine targets only the “bullseye” part of the spike that the virus uses to attach and gain access to human cells, called the receptor-binding domain (RBD), of SARS-CoV-2 variants and of the virus behind the original SARS. The preclinical data appeared in Science Translational Medicine.

Barton Haynes, MD and colleagues at the Duke Human Vaccine Institute are also using ferritin to design and develop a “pan-betacoronavirus vaccine,” referring to the genus to which SARS-CoV-2 belongs. They say their results in macaques, as published in Nature, “demonstrate that current mRNA-based vaccines may provide some protection from future outbreaks of zoonotic betacoronaviruses.”

Mosaic nanoparticles : Graduate student Alexander Cohen is leading an effort at CalTech, in the lab of Pamela Bjorkman, PhD, that uses nanoparticles consisting of proteins from a bacterium (Strep pyogenes) to which RBDs from spike proteins of four or eight different betacoronaviruses are attached. The strategy demonstrates that the whole is greater than the sum of the parts.

“Alex’s results show that it is possible to raise diverse neutralizing antibody responses, even against coronavirus strains that were not represented on the injected nanoparticle. We are hopeful that this technology could be used to protect against future animal coronaviruses that cross into humans,” said Björkman. The work appeared in Science.

Candidate vaccines from Inovio Pharmaceuticals also use a mosaic spike strategy, but with DNA rings (plasmids) rather than nanoparticles. One version works against pre-Omicron variants and is being tested against Omicron, and another with “pan-COVID-19” coverage has tested well in animal models. Inovio’s vaccines are delivered into the skin using a special device that applies an electric pulse that increases the cells’ permeability.

Chimeric spikes: Yet another approach is to fashion vaccines from various parts of the betacoronaviruses that are most closely related to SARS-CoV-2 – the pathogens behind MERS and SARS as well as several bat viruses and a few pangolin ones. The abundance and ubiquity of these viruses provide a toolbox of sorts, with instructions written in the language of RNA, from which to select, dissect, recombine, and customize vaccines.

“SARS-like viruses can recombine and exhibit great genetic diversity in several parts of the genome. We designed chimeric spikes to improve coverage of a multiplexed vaccine,” said David Martinez, PhD.

His team at the University of North Carolina, Chapel Hill has developed mRNA vaccines that deliver “scrambled coronavirus spikes” representing various parts, not just the RBD, as described in Science last August.

In mice, the chimeric vaccines elicit robust T and B cell immune responses, which stimulate antibody production and control other facets of building immunity.

Beyond the Spike Bullseye

The challenge of developing pan-coronavirus vaccines is dual. “The very best vaccines are highly specific to each strain, and the universal vaccines have to sacrifice effectiveness to get broad coverage. Life is a trade-off.” Petrovsky told Medscape Medical News.

Efforts to broaden vaccine efficacy venture beyond targeting the receptor-binding domain bullseyes of the spike triplets that festoon the virus. Some projects are focusing on less changeable spike parts that are more alike among less closely related coronaviruses than is the mutation-prone RBD. For example, the peptides that twist into the “stem-helix” portion of the part of the spike that adheres to host cells are the basis of some candidate vaccines now in preclinical studies.

Still other vaccines aren’t spike-based at all. French company Osivax, for example, is working on a vaccine that targets the nucleocapsid protein that shields the viral RNA. The hope is that presenting various faces of the pathogen may spark immunity beyond an initial antibody rush and evoke more diverse and lasting T cell responses.

With the myriad efforts to back up the first generation of COVID-19 vaccines with new ones offering broader protection, it appears that science may have finally learned from history.

“After the SARS outbreak, we lost interest and failed to complete development of a vaccine for use in case of a recurrent outbreak. We must not make the same mistake again,” Giurgea and colleagues write in their Nature article about universal coronavirus vaccines.