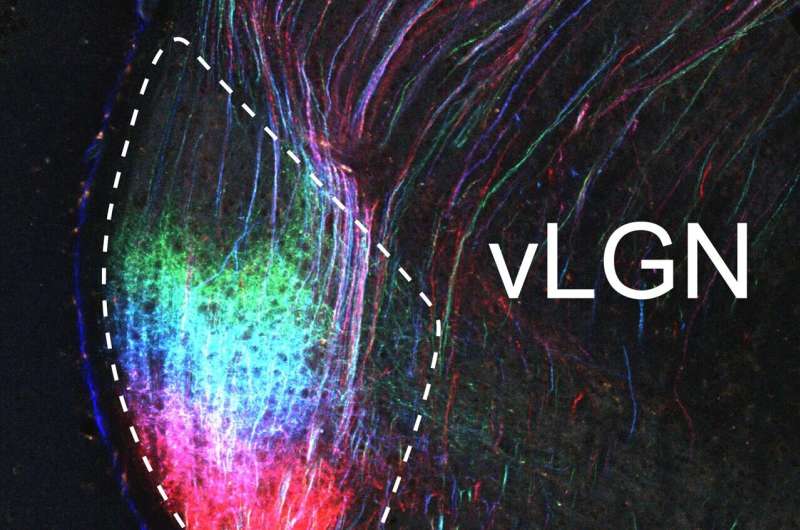 Researchers at the Sainsbury Wellcome Centre have discovered a brain mechanism that enables mice to override their instincts based on previous experience.

The study, published today in Neuron, identifies a new brain circuit in the ventral lateral geniculate nucleus (vLGN), an inhibitory structure in the brain. The neuroscientists found that when activity in this brain region was suppressed, animals were more likely to seek safety and escape from perceived danger, whereas activation of vLGN neurons completely abolished escape responses to imminent threats.

While it is normal to experience fear or anxiety in certain situations, we can adjust our fear responses depending on our knowledge or circumstances. For example, being woken up by loud blasts and bright lights nearby might evoke a fear reaction. But if you have experienced fireworks before, your knowledge will likely prevent such reactions and allow you to watch without fear. On the other hand, if you happen to be in a war zone, your fear reaction might be strongly increased.

While many brain regions have previously been shown to be involved in processing perceived danger and mediating fear reactions, the mechanisms of how these reactions are controlled are still unclear. Such control is crucial since its impairment can lead to anxiety disorders such as phobias or post-traumatic stress disorders (PTSD), in which the circuits in the brain associated with fear and anxiety are thought to become overactive, leading to pathologically increased fear responses.

The new study from the research group of Professor Sonja Hofer at the Sainsbury Wellcome Centre at University College London, took advantage of an established experimental paradigm in which mice escape to a shelter in response to an overhead expanding dark shadow. This looming stimulus simulates a predator moving towards the animal from above.

The researchers found that the vLGN could control escape behavior depending on the animal’s knowledge gained through previous experience, and on its assessment of risk in its current environment. When mice were not expecting a threat and felt safe, the activity of a subset of inhibitory neurons in the vLGN was high, which in turn could inhibit threat reactions. In contrast, when mice expected danger, activity in these neurons was low, which made the animals more likely to escape and seek safety. 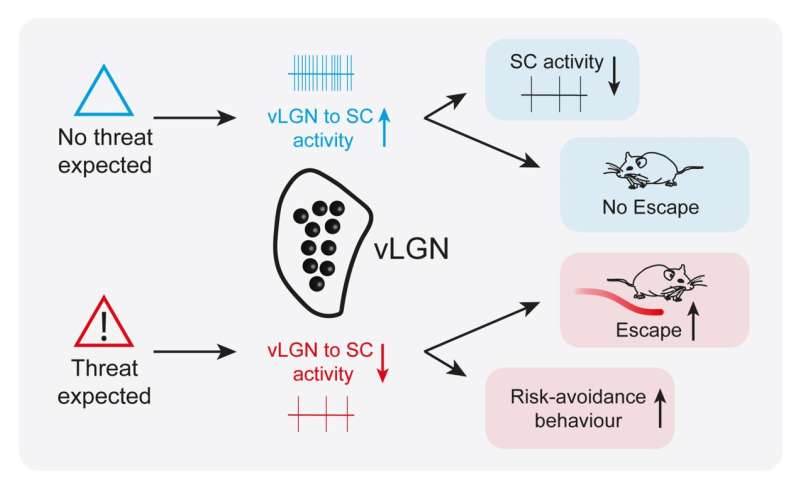 “We think the vLGN may be acting as an inhibitory gate that sets a threshold for the sensitivity to a potentially threatening stimulus depending on the animal’s knowledge,” said Alex Fratzl, Ph.D. student in the Hofer lab and first author of the paper.

The next piece of the puzzle the researchers are focusing on is determining which other brain regions the vLGN interacts with to achieve this inhibitory control of defensive reactions. They have already identified one such brain region, the superior colliculus in the midbrain.

“We found that the vLGN specifically inhibits neurons in the superior colliculus that respond to visual threats and thereby specifically blocks the pathway in the brain that mediates reactions to such threats—something the animal sees that could pose a danger like an approaching predator,” said Sonja Hofer, Professor at the Sainsbury Wellcome Centre and corresponding author on the paper. 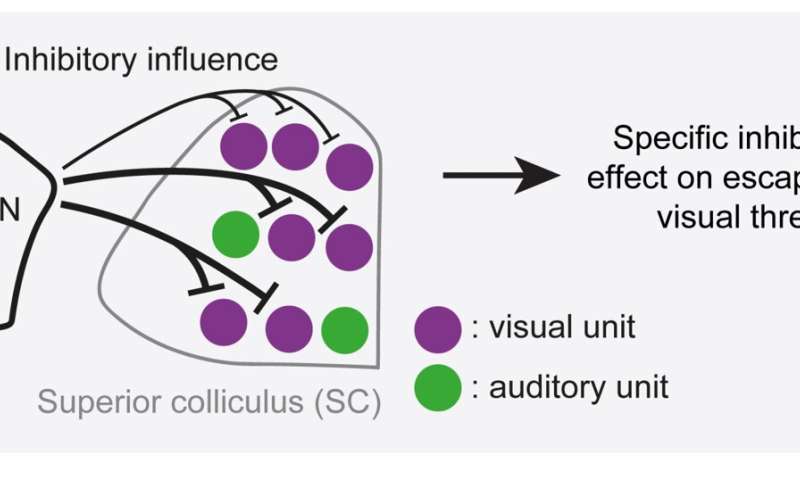