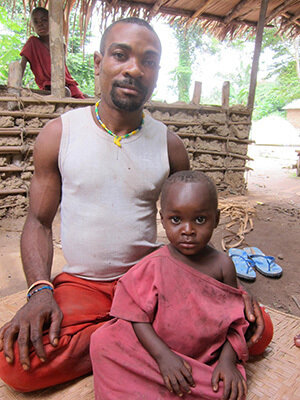 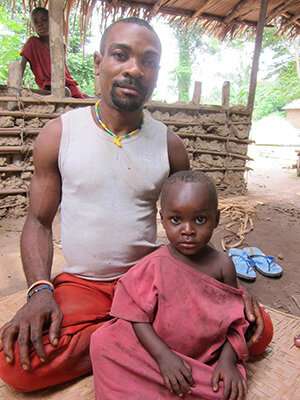 Most of the research on the biology of fatherhood has focused on fathers in the U.S., Europe and some Asian countries. In these settings, levels of some hormones, such as lower testosterone and higher oxytocin, have been linked to more nurturing fathering. Yet, a University of Notre Dame research team wants to take a wider view. The role of fathers can vary greatly across cultures, and the researchers aimed to test whether the biology of fatherhood did, too.

To get a more complete picture of hormones and fatherhood that includes different cultures, social support systems and social hierarchies, Lee Gettler, associate professor of anthropology at Notre Dame, led a team that worked with the BaYaka and Bondongo societies in the Republic of the Congo. The team’s paper was published this week in Nature magazine’s Scientific Reports. It is the first study to link fathers’ testosterone levels to broader social roles within their communities and revealed that BaYaka dads who were seen as more generous resource sharers had lower testosterone than less generous men.

Part of what motivated Gettler and his team to explore the role of fathers among the BaYaka and Bondongo is their very different models of family life and roles for fathers. In the U.S. and elsewhere, the pandemic has forced parents to forge new strategies to help their children meet their school demands while trying to negotiate their own work schedules. Many families have formed educational “pods” in which children from multiple families are schooled together, either by one of the parents or a teacher who is hired by the group. Fathers working from home have found new ways of integrating their roles in work and home life. Gettler and his team explore how men’s hormones are linked to such social flexibility in response to the many challenges human parents have faced throughout human evolution and still do all over the world today.

In the Congo Basin, Gettler’s team works with two neighboring groups with different ideas about fathers’ roles. “The BaYaka people are very egalitarian and hyper-cooperative within their communities, and fathers are valued for generously sharing resources across the group. Among the Bondongo people, who rely on fishing and farming for sustenance, society is patriarchal and status driven, and fathers are valued as providers,” said Gettler.

Anthropologists agree that the rise of paternal care and increased levels of cooperation were important to human evolutionary success by way of helping improve child well-being and survival, but links between fathers’ testosterone levels and cooperative, prosocial behaviors are still lacking in the field. To pursue these links, Gettler’s collaborators—including Sheina Lew-Levy, Simon Fraser University, Canada and Aarhus University, Aarhus, Denmark; Mallika Sarma, Johns Hopkins University; Valchy Miegakanda, Institut National de Santé Publique, Republic of the Congo; and Adam Boyette, Max Planck Institute for Evolutionary Anthropology, Leipzig, Germany—took saliva samples from both the BaYaka and Bondongo fathers to determine testosterone levels. They also asked the men to rank the best fathers in each group based on their community’s valued roles for men.

“BaYaka fathers are not playmates with their children like men are in the U.S. and other large-scale, industrialized societies. They spend more time in hands-on care, holding their babies, taking their older children with them to work in the forest, co-sleeping all together as a family at night. But fathers are also part of larger, cooperative community,” said Boyette, a senior author on the new paper.

The role of fathers in Bondongo communities differs from BaYaka fathers in that the former are most valued for being providers of resources for their households. Bondongo men often undertake significant risk to hunt, fish and clear plots for farming. Although they are generally committed fathers, Bondongo fathers often do not engage in much nurturing care of their children, which is primarily a women’s role in their society. In contrast to the BaYaka results, Bondongo fathers who were rated as better providers had higher testosterone levels.

The researchers also looked at levels of testosterone in relation to marital conflict. They found that men in both societies with higher testosterone levels were ranked (by other men) as having greater conflict with their wives. This is consistent with studies of men in the U.S. and the Philippines.

The data in the BaYaka/Bondongo study are correlational, meaning the researchers do not know if good sharers’ generous behavior leads to low levels of testosterone, or that low levels of testosterone lead to increased sharing. In previous research, Gettler and other anthropologists have demonstrated that testosterone levels drop significantly when men become fathers. A recent study from Gettler’s lab, completed in conjunction with a South Bend hospital, showed that if a dad’s testosterone level was lower on the second day of his infant’s life, he would ultimately be more involved in the baby’s care months later.