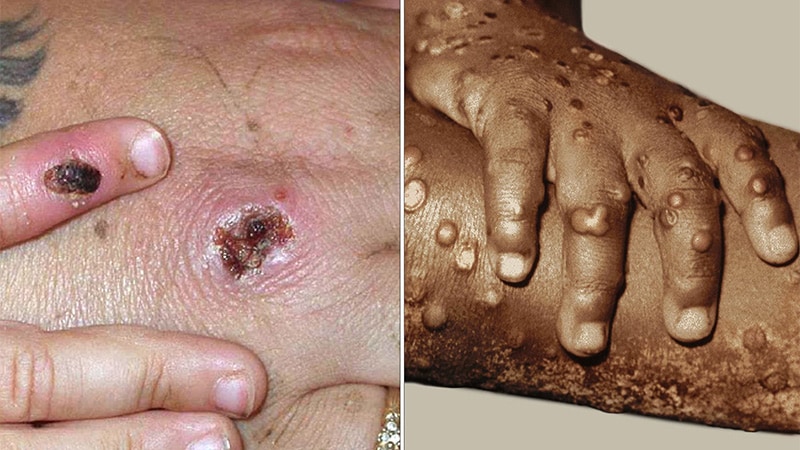 BUENOS AIRES, Argentina — Vaccinating against monkeypox can complement other public health measures aimed at containing the current outbreak in nonendemic countries. However, when it comes to the need to immunize now, we need to “calm down,” according to officials and experts at a meeting organized by Argentina’s Ministry of Health. Another issue to be considered is whether doses should be given within the framework of clinical trials so that evidence can be built up, they said.

The vaccination that began for select groups in other countries, such as the United States, Canada, and the United Kingdom, is “anarchic” and completely illogical, according to Tomás Orduna, MD, head of the Unit of Tropical Medicine and Travel Medicine at the Francisco Muñiz Hospital of Infectious Diseases in Buenos Aires.

“There’s use because there’s demand by certain groups…For example, at the most recent International AIDS Conference in Montreal, there was a sense of anarchy with how whoever wanted to be vaccinated was being vaccinated — and all of this when there are harsh restrictions when it comes to accessing the supply of the vaccine,” Orduna said. He made his remarks during a meeting with the Argentinian Network of Science Journalism (RADPC), in which Medscape Spanish edition took part.

Carla Vizzotti, MD, Argentina’s Minister of Health and former chair of the Argentine Society of Vaccinology and Epidemiology (SAVE), confirmed that Argentina is one of the 10 countries in the Americas that notified the Pan American Health Organization (PAHO) that it was interested in acquiring monkeypox vaccines through the PAHO Revolving Fund.

But “we need to calm down,” she insisted. In response to a question posed by Medscape Spanish edition, Vizzotti said, “Argentina wants to find out about availability to then move forward and make decisions based on the recommendations.”

Prophylaxis Before and After

On July 23, the World Health Organization (WHO) Director-General declared the ongoing monkeypox outbreak a Public Health Emergency of International Concern. Among the temporary recommendations issued was: “Consider the targeted use of second- or third-generation smallpox or monkeypox vaccines for post-exposure prophylaxis in contacts, including household, sexual, and other contacts of community cases and health workers where there may have been a breach of personal protective equipment.”

The WHO also reported that modeling work conducted by the European Centre for Disease Prevention and Control (ECDC) and the European Commission’s Health Emergency Preparedness and Response Authority (HERA) is suggesting that the addition of vaccination-related interventions can increase the chances of controlling the outbreak, with preexposure prophylaxis of individuals at high risk for exposure appearing to be the most effective strategy to use vaccines when contact tracing is less effective or impracticable.

Nevertheless, the WHO Director-General recommended that states “make all efforts to use existing or new vaccines against monkeypox within a framework of collaborative clinical efficacy studies, using standardized design methods and data collection tools for clinical and outcome data, to rapidly increase evidence generation on efficacy and safety, collect data on effectiveness of vaccines (eg, such as comparison of one- or two-dose vaccine regimens), and conduct vaccine effectiveness studies.”

In response to another one of Medscape Spanish edition‘s questions, Juan Manuel Castelli, MD, infectious diseases specialist and undersecretary of Health Strategies for the Argentine Ministry of Health, clarified that these would be “follow-up studies, traceability studies.” He went on to explain: “We have to trace nominal vaccination, assess the risk of exposure — especially among healthcare workers — and evaluate what’s happening in terms of the disease presenting or not presenting.” “If there’s an anarchic system in administering the vaccine,” he added, “it’s also going to be difficult to monitor the results.”

On Friday, August 5, there was a Special Session of the Directing Council in which the member states requested that the PAHO/WHO Director, Carissa F. Etienne, MBBS, continue to support them in implementing a coordinated response to address the outbreak of monkeypox, including support for “equitable access” to monkeypox vaccines.

During the RADPC meeting, Etienne pointed out that there currently is only one third-generation monkeypox vaccine in the world — a nonreplicating smallpox vaccine. It is made by only one manufacturer — the small Danish company Bavarian Nordic — and it is in high demand throughout the world. She did add that talks with the company have already begun.

“We have to be rational. The knowledge we have is very scarce, and what’s even more scarce is the supply,” Orduna noted. “If we vaccinate, for example, healthcare workers who have very little likelihood of being exposed to a person with a suspected or a confirmed case of monkeypox, we’re squandering what few doses we have.”

In the United States, the ongoing spread of monkeypox virus has been declared a public health emergency. On August 8, to stretch the country’s limited supply, officials authorized the administration of one fifth of the usual dose of the Danish vaccine. Meanwhile, Brazil expects to receive 50,000 doses between September and October. Applying the same approach as the United States, they will be able to immunize not 25,000, but 125,000 people.

This article was translated from the Medscape Spanish edition.