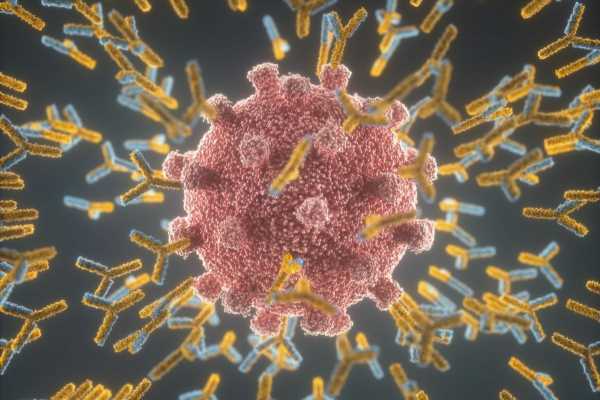 Viruses use multiple mechanisms in order to escape host immune responses. These include the addition of complex glycans to shield viral antigens, block antibody-mediated neutralization and complement activation, mutations in the epitope residues, and the production of shortened viral glycoproteins with common viral spike epitopes.

Activated B cells within germinal centers undergo class-switching and become memory B cells, further showing the expansion of the cell population, somatic hypermutation, and selection to enhance antigen binding.

SARS-CoV-2 has a spike protein antigen that binds to the host cell angiotensin-converting enzyme 2 (ACE2) receptor via its S1 subunit and accomplishes membrane fusion through the S2 subunit. Being an RNA virus, it shows high mutation rates, high yields, and short replication times. These allow it to adapt to different environments under selective pressures, evading host immunity and demonstrating drug resistance. Despite its proofreading system, over 25,000 mutations have been identified in the viral genome.

Some of these mutations facilitate antibody escape, and mutational antigenic profiling helps identify the hotspots of such mutations in spike or envelope proteins. By defining the functional binding epitopes, antibody escape mapping helps predict the selected mutations in the presence of convalescent plasma or monoclonal antibodies (mAbs). This could be important in developing therapies.

The SARS-CoV-2 spike protein shows greater conformational variability in the later variants compared to either the ancestral or D614G variants. This could be because the variants play important roles in binding and locating the angiotensin-converting enzyme 2 (ACE2) on the host cell surface.

So far, the World Health Organization (WHO) has identified four classes of SARS-CoV-2 variants, namely, variants being monitored (VBMs), variants of interest (VOIs), variants of concern (VOCs), and variants of high consequence (VOHCs). There are 10 VBMs, with two VOCs, namely, Delta and Omicron.

The Alpha VBM has Δ69/70 and Δ144 in the NTD and N501Y mutation in the receptor-binding domain (RBD), with higher infectivity and more rapid syncytia formation, along with higher binding affinity. The structure of the RBD and NTD are not significantly altered, but it is associated with higher mortality and viral spread than the ancestral variant. Both Pfizer and AstraZeneca (AZ) vaccines provide long-term protection against this variant, equivalent to that against D614G.

The Beta variant has multiple mutations, including the K417N, E484K, and N501Y in the spike, with NTD deletions at 241-243, that reduce antibody binding, as well altering the structure of the NTD neutralizing epitope. The E484K mutation increases RBD binding to ACE2 because of the enhanced electrostatic interactions at the interface, contributing to higher infectivity.

There are suggestions that the Beta variant weakens viral interactions with the T and B cells, causing immune surveillance escape. Both vaccines show reduced efficacy against this variant than against either D614G or Alpha.

The Gamma has the same or very similar mutations as the Beta variant in the RBD (K417T/N, E484K, and N501Y) but is more susceptible to antibodies due to allosteric interactions with more distant mutations. Vaccine efficacy against this variant is high.

With the Delta variant, there are 11 defining mutations in the spike, with P681R being highly conserved and driving efficient furin cleavage, which leads to higher membrane fusion and greater pathogenicity. Despite the Alpha variant having another non-synonymous mutation at P681, the Delta has greater transmissibility by 60%.

The presence of several RBD mutations such as L452R, near the edge of the ACE2-binding surface, may indicate that this variant accumulated multiple immune evading and antibody escape mutations while retaining high ACE2 binding. The T478K mutation replaces the E484K mutation in earlier variants, conferring loss or binding reduction by class 1 and class 1 neutralizing antibodies.

Both Omicron and Delta variants contain multiple mutations and deletions in the NTD, at a supersite, unlike any other variant known so far. These change the antigenic surface and the glycan shield around this supersite, enabling these variants to escape from NTD-specific neutralizing antibodies in convalescent sera induced by infection with the ancestral variant or by vaccination.

Omicron contains 34 or more spike mutations, many of which are known to enhance transmissibility, and indeed it is more transmissible even than the highly contagious Delta variant. Besides, it contains spike fusion-enhancing mutations and those which enhance receptor binding affinity.

With the Pfizer vaccine, neutralizing antibodies were low or undetectable against the D614G, Alpha, Beta, and Delta variants but increased after the second dose. Even so, compared to the Alpha variant, the neutralization titers were 3- or 16-fold lower with the Beta and Delta variants. The AZ vaccine produced similar results, indicating that the neutralizing response to these variants is significant only after the second dose of vaccine.

Most monoclonal antibodies considered potentially or actually valuable against SARS-CoV-2 infection lost activity against Omicron. Only 3/9 mAbs retained some activity, such as ADG-20 and Sotrovimab. According to some reports, at five months from the second dose of both vaccines, the recipient sera showed little or no antiviral activity against the Omicron variant. Still, a booster dose of a nucleic acid vaccine, like the Pfizer vaccine, increased vaccine effectiveness to 75%.

Neutralizing antibodies are directed against the RBD, in 90% of cases, with the rest targeting the S2 subunit and the NTD. However, the S2 subunit appears to be more conserved and could thus be a better target for the development of broadly neutralizing antibodies. The immunodominance of the RBD could be due to lower glycosylation, better accessibility, and exposure of cryptic sites because of multiple conformations.

An analysis between the structural contact sites and escape maps suggested that these maps complement each other; therefore, comprehensive knowledge of immunodominant epitopes on the spike protein and escape mutations would aid efforts to understand viral evolution and rational design of antibody therapeutics, vaccines, and other countermeasures.”

Antibodies are classified depending on whether they bind epitopes that overlap with the ACE2 receptor and recognize RBDs in open or closed or both states. Class 1 nAbs compete directly with ACE2 by binding RBDs in the “up” conformation, class 2 nAbs compete directly with the receptor by binding both “up” and “down” RBDs, and class 3 nAbs bind the spike outside the RBD-ACE2 binding interface, in both “up” and “down” RBDs.

Class 4 nAbs bind a cryptic epitope in the “up” RBD. Finally, there are anti-NTD nAbs. However, therapeutic nAbs continue to target the RBD because mutations in the NTD supersite occur in many variants, including Alpha, Beta, and Gamma. These mutations block neutralization by anti-NTD antibodies.

However, the paper also points out that antibodies are being generated against these variants that can effectively neutralize them, but at a slower pace than that of the evolution of the variants themselves.

No viral variant so far has emerged with those mutations that escape all 3 antibody classes. Therefore, close monitoring of SARS-CoV-2 sequences is warranted because the development of a strain that can escape all 4 antibody classes would be a big burden.”

Several anti-RBD antibodies have been identified, such as A23-58.1 and B1-182.1, and mAb 222. These are broadly-neutralizing nAbs, binding to a highly conserved region at the tip of the RBD away from the mutational hotspots that harbor K417, E484, and N501. Such antibodies have great potential for development and use as cocktails in the effective treatment of SARS-CoV-2 infection.

Engineered molecules are also being conceptualized and developed, such as broadly neutralizing nanobodies that bind conserved regions on the RBD not accessible to human antibodies and outside the ACE2-binding surface; biospecific antibodies that comprise paired antibodies with non-overlapping epitopes on the spike; and multivalent nanobodies. All are reported to have high potency of neutralization and block mutational escape effectively.

Moreover, vaccine-induced cross-reactive adaptive cellular immune responses are also important in long-term immunity to this virus, with minimal risk of mutational escape. However, as the virus continues to evolve,