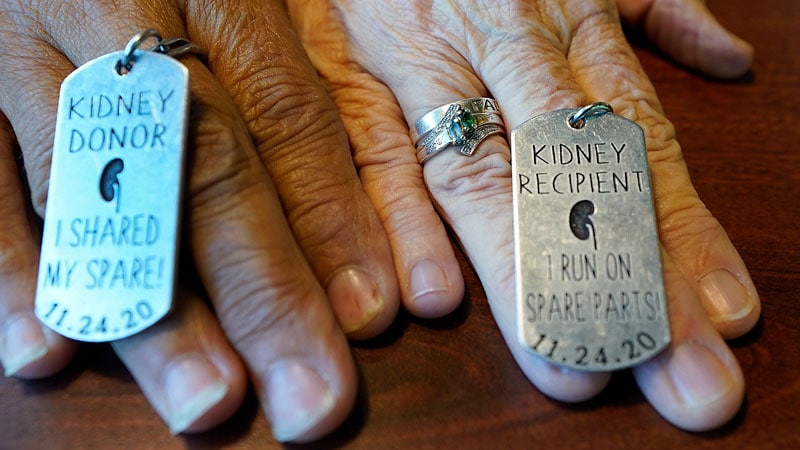 From the time they were young, Amy DeAngelis and her younger sister Laura Johnson knew that Laura would need a new kidney someday. A condition called polycystic kidney disease runs in their family, and eventually the affected organs fail. Amy had dodged the genetic threat and always figured that when Laura needed a kidney, she’d readily hand one over.

That day has come. The pandemic’s effects on surgery scheduling and concerns about procedural complexities have led to delays. But if all finally goes as planned, Amy, at age 50, will become a living kidney donor to Laura, now 49, sometime before the end of the year at a Boston-area hospital.

More than 90,000 people in the United States are on the kidney transplant waitlist. The sisters’ experience is not always how living kidney donation connections happen. Genetic relatedness doesn’t guarantee a match, and some living donor-recipient matches are made within looser social networks or even stranger to stranger. The process of donation isn’t risk-free for donors, yet that doesn’t seem to faze some of them.

Adam Drake, a schoolteacher in Vancouver, British Columbia, fell into the unrelated match category with his recipient. His sister-in-law’s kidneys had begun to fail. As the organs’ function declined, he and his wife privately agreed they “would do what it took to keep her healthy,” he says. What they hadn’t anticipated was that his wife wouldn’t be a donor match for her sister ― he would.

Although Drake never had a second thought about donating, the process was long and not always smooth. Leading up to the procedure, he had to have many tests. One of the “weirdest tests,” he says, “was when I had to drink a particular drink, wait an hour, and stand naked and pee in front of somebody while they watched the urine drain out of my body on a scanner.”

The donation, which took place in the U.K., left him in the hospital for about 5 days.

“It was rough ― it is a major operation,” says Drake. Afterward, he developed a hernia, which meant opening him up again for a repair.

In the end, he says, “I’ve got a nice scar and it’s still desensitized,” but otherwise, “life has continued 100% as normal” with his remaining kidney.

Not all donors and recipients know one another. Leah Waters, a journalist in Dallas, heard through her writers’ group chat about a young woman who needed a kidney. Only 19 and already on dialysis, the young patient was in an urgent situation. No one in her family was a match. Some members in the chat filled in online donor candidate forms to see if they might be. Waters, now age 33, ended up being the one.

After a series of blood tests and a battery of health exams, much like the ones Drake described, Waters had her kidney removed for donation in March 2019. The surgery took about 3 hours.

After the transplant, the recipient’s kidney function went from extremely low to almost 100% within a day, Waters says. Her own hospital stay was only a night, and her recovery was event-free, allowing her to return to work within 2 weeks. She and the recipient are now close friends.

Removing a major organ from the body has become less invasive but remains a major procedure.

Surgeons have shrunk the cuts they use to just the size needed to remove the kidney and insert instruments, says Samuel Sultan, MD, an assistant professor of surgery at the Weill Cornell Medicine Division of Transplant Surgery Kidney & Pancreas Transplant Program in New York City. In some places, surgeons may still use a hand rather than instruments for removal, which requires a slightly larger opening. And some institutions have turned to a robotic approach, controlling the instruments while watching them on a screen, “kind of like a video game,” says Sultan.

Regardless of the method, several steps are involved. Although the kidneys lie at the back of the body, surgeons now get to them through the abdomen, which requires filling the space with gas to see internal organs clearly. To reach the kidney from this entry point, surgeons must carefully move the sensitive large intestine out of the way to avoid damage.

When it comes time to disconnect the kidney, there are three major connections to deal with: a large artery that runs from the aorta, a vein that drains blood from the kidney into the vena cava, and the ureter, which drains urine from the kidney to the bladder.

“We have to divide all of these connections so that the kidney can still be used for transplant, so we try to get as much length as possible to connect to the recipient,” Sultan says.

Before dealing with these big tubes, the surgeons will address the various smaller ones, sealing them up as they disconnect them. To close the big artery and vein, surgeons use clips that aren’t removed later.

Once the kidney is out, the “clock is ticking, and minutes matter,” Sultan says.

They start preserving the organ as soon as possible by flushing a preservative into it.

“When that’s done, we can breathe, but there’s still a clock ticking.”

The kidney can still work even if it’s preserved for many hours, he says, but not forever.

The whole process usually takes 2 to 3 hours, according to Sultan. The donor’s remaining kidney will usually expand in size and increase in function over the next few months. But it works well enough even immediately after the surgery that the donor “won’t notice any difference,” he says.

When surgeons place the donor kidney in the recipient, “98% of the time, we leave the old kidneys in place,” says Sultan. One reason is that these kidneys may still have a little function to contribute, and the other is that removing organs is always risky.

Despite not knowing her recipient beforehand, Waters says that she didn’t hesitate a minute to donate.

“There’s a girl, she’s 19, her whole life is ahead of her, and I have this kidney. She can have this kidney,” she says, adding that people live long and happy lives after donation, and their lives aren’t shortened by donating a kidney.

“I was never frightened of it, and there was never a time that I thought, ‘Oh, have I made the right decision?'” he says. The doctors planning the procedure privately told him that he could withdraw at any time, and they’d provide a medical excuse for it. But he never wavered.

“My sister-in-law needed it, I had a spare one, and we were compatible,” he says. They now text each other a little celebratory note on the anniversary of the surgeries.

Amy DeAngelis had always known that she’d try to donate for her sister. If that hadn’t worked out, she says, she’d have gone for chain donation. When a willing living donor and targeted recipient pair are incompatible, the donor can instead give their kidney to any recipient who’s a match and awaiting a transplant. This process continues in a chain of donations to matched recipients, with patients like Laura a hopeful recipient from an altruistic donor somewhere in the chain.

In October, news broke that surgeons had successfully connected a genetically engineered pig kidney to a patient without detectable brain activity who was still on a ventilator. The kidney was not transplanted internally but attached to the patient’s body, where it seemed to start functioning normally. But despite this promising breakthrough, so-called pigney transplants are still likely years away.

Without a living donor match, a patient needing a kidney will likely have to wait for years. A dozen such patients die every day while waiting. For the hundreds of thousands of people on dialysis who need kidneys, says Waters, “there’s not a kidney shortage, but a lack of education about donation.”

Patients in kidney failure must have dialysis to stay alive, hooked up several times a week to a machine to filter their blood for them. Drake says that as part of his recovery process, he spent time in a ward where people were having dialysis, “and it was horrendous. The fact that they went through this three times a week, sitting there for hours.”

A living kidney donor doesn’t have to be a special kind of person, says Waters, noting that she’s tired of this perception.

“It just requires you to have a kidney,” she says, echoing an essay she wrote about her experience for The Dallas Morning News : “I felt like there was a kid in the ocean drowning and I was the only one there at the time who could do something about it.” And she did.

National Kidney Foundation: “The Kidney Transplant Waitlist ― What You Need to Know.”

The Dallas Morning News: “She donated her kidney to a stranger. Her past struggles returned. Then came an unexpected friendship.”

National Institute of Diabetes and Digestive and Kidney Diseases: “Kidney Disease Statistics for the United States.”