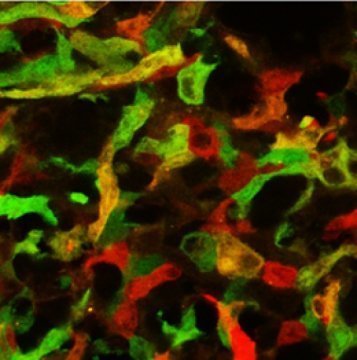 Mononuclear phagocytes can both promote and inhibit inflammation. A Team from Ludwig-Maximilians-Universitaet (LMU) in Munich has now shown that individual phagocytes in the central nervous system can play both roles, sequentially adopting different phenotypes with distinct functions.

Mononuclear phagocytes, which recognize, engulf and digest damaged and infected cells, form an important arm of the innate immune system. However, they also play an important, but paradoxical role in the pathogenesis of inflammatory diseases of the central nervous system, such as multiple sclerosis. On the one hand, they contribute to the initiation of inflammatory reactions that lead to tissue damage. But they are also intimately involved in the subsequent resolution and repair of such lesions. Hence, these cells are capable of exhibiting both pro- and anti-inflammatory phenotypes. In order to explain their apparently contradictory roles at sites of inflammation, it has been postulated that phagocytes can assume functionally different activation states. How and where these phenotypes are specified in the inflamed nervous system, and whether they remain fixed, has so far eluded elucidation. Now a team led by Professor Martin Kerschensteiner, Director of the Institute of Clinical Neuroimmunology at LMU, has characterized the fates of single phagocytes, and shown that their functional properties are not in fact fixed. Instead, individual cells can switch phenotypic states in inflamed tissues. The new findings appear in Nature Neuroscience.

The study was carried out in an experimental mouse model of multiple sclerosis. “We used an in vivo imaging approach, which allowed us to distinguish between different phagocyte phenotypes in vivo on the basis of the expression of different fluorescent proteins,” says Kerschensteiner. “With the aid of this method, we were able to track individual cells and monitor their phenotypic identity in real time.” This approach revealed that pro-inflammatory phagocytes are found, as expected, at the sites of developing lesions, while the differential fluorescence marker expression indicated that the phagocytes associated with resolving lesions have an anti-inflammatory character.

By tracking individual phagocytes continuously, the researchers were able to observe that this phenotypic difference was not due to the successive recruitment of two different cell types — as had been suggested on the basis of results from other model systems. Instead, single phagocytes in the central nervous system can switch from a pro- to an anti-inflammatory state, depending on the nature of the local environment. “In subsequent experiments, we demonstrated that this phenotypic conversion is induced by signals from the central nervous system, in particular by soluble factors secreted by cells known as astrocytes,” Kerschensteiner explains. The discovery should enable researchers to obtain a better molecular understanding of the phenotype switch, and allow them to explore the therapeutic potential of targeted manipulation of phagocyte populations in the management of neuroinflammatory conditions.