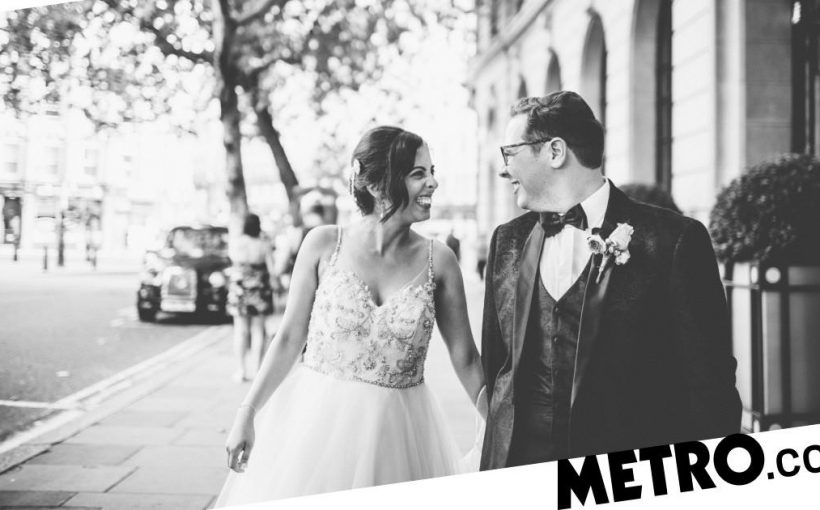 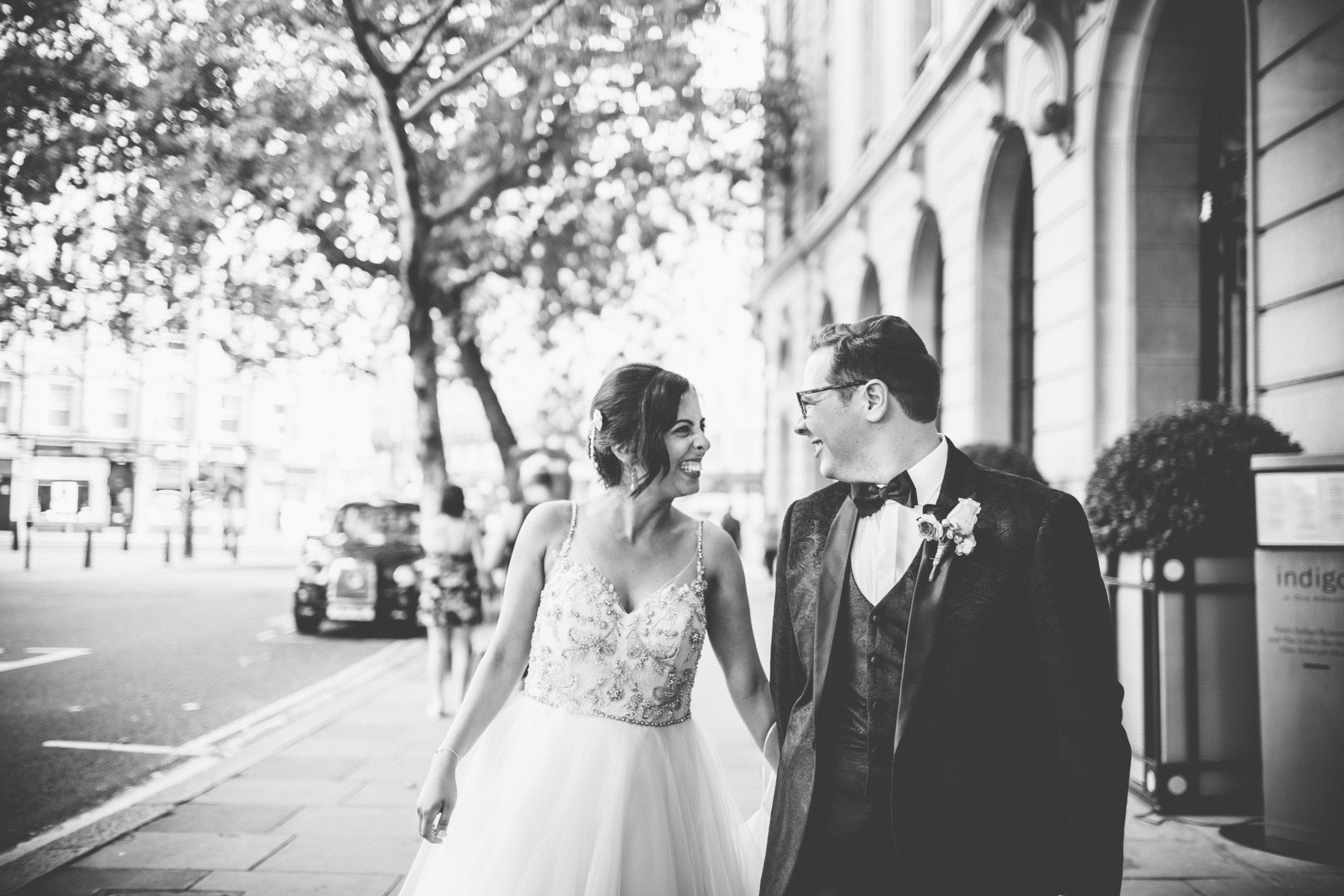 Relaxing in my bridal suite the evening before my big day my four siblings – two sisters and a brother – were not ordering me a glass of champagne, as you might expect, but a glass of salt water to help with my ulcerated mouth.

I’d had chemotherapy a week earlier and, although this was far from what I had dreamed the night before my wedding might look like, I was determined not to let it ruin the best day of my life after so much preparation.

Three years before, back in 2016, I‘d started suffering with cramps and bloating. So much so I was struggling to eat without feeling uncomfortable and was in a lot of pain.

But, over three weeks, three different doctors said I had some inflammation of the bowel and had reassured me that there was nothing to worry about.

Unconvinced, I’d visited A&E but was sent packing with laxatives and told I was constipated.

As I was suffering from agonising lower back pain and looked like I was six months pregnant I knew something wasn’t right. That week, I saw a private gastro specialist but he also gave me laxatives.

Not prepared to accept what I was being told – I knew my body better than anyone – I went back to A&E for a second time a week later.

This time, the doctor was concerned by my unexplained bulging belly, which felt hard – not like normal bloating. They took bloods and instantly requested a CT scan, suspecting an infection, but the scan revealed a swelling on my right ovary.

At just 27, I had googled the worst cases of my symptoms and couldn’t believe the swelling had been missed despite my repeated visits.

I immediately shrieked, ‘Is this ovarian cancer?’ The doctor admitted he shared my concerns but couldn’t say for sure.

I was transferred immediately to The Royal Marsden Hospital, London, where six litres of fluid was drained from my abdomen. Even before the biopsy result, in my heart I knew exactly what was happening… cancer.

The gynecologist confirmed that it was late-stage (Stage 3c,) ovarian cancer. I was totally crushed but, surrounded by my loving family, I felt ready to tackle it. I went straight into survivor mode as the doctor explained the plan.

After struggling to get doctors to take me seriously for so long, I was suddenly sitting in a chair about to have chemotherapy.

It was terrifying – as soon as I saw the huge needle I yelped but my family were with me, keeping me calm. It took a long time for the seriousness of what lay in front of me to sink in.

I endured nine weeks of chemotherapy treatment followed by an operation, called radical debulking surgery, to remove my womb, cervix, fallopian tubes, ovaries, a lymph node leading to my heart, my peritoneum and a huge part of my diaphragm. My liver and bowel had to be checked.

The recovery was set to be a month but, incredibly, after six days I was allowed home. Overjoyed, I bounced out of hospital.

Of course, it meant I wouldn’t be able to get pregnant and have children of my own. I knew it had to be done to save me, but it was still devastating. I’d no time to consider freezing my eggs and I had to accept motherhood would never be a natural process for me.

I was single at the time and children hadn’t been something I’d had on my mind before the diagnosis. As a girl I’d always imagined that one day I’d become a mother – and I still hope to, just in a different way.

After the operation and nine more weeks of chemo, at last, doctors confirmed that I had no further evidence of disease in my body. Relieved, I wrote a blog about being in remission and shared the happy news on Facebook.

I got a message from a chap I’d known through mutual friends – a fellow cancer survivor – Alex Samuels. He wanted to congratulate me and offered to buy me a celebratory drink.

Alex, then 28, had recovered from non-Hodgkin’s lymphoma in 2011 so we had a lot to talk about. We got the cancer stuff out the way and realised how much we had in common. We understood each other on the deepest level.

We soon admitted our feelings for each other, started dating and in October 2018 in Israel while we were alone on the beach, he popped the question. I was overjoyed and instantly accepted – I’d known since our first drink that he was the missing piece to my puzzle.

We set 26 August 2019 as our wedding date. As we excitedly prepared for our big day, that April, a routine CT scan of my abdomen picked up a possible sign of cancer recurrence. A small tumour was found behind my bowel.

Shocked didn’t cover my reaction – I’d been two and a half years clear – but Alex held my hand and assured me that we’d postpone the wedding if needed and, whatever this meant for our future, we’d face it together.

Alex instantly eased my worries and I felt stronger with him beside me.

I was quickly scheduled in for surgery to remove the tumour in June 2019, and then had to prepare for six more cycles of chemotherapy.

With no time to lose, treatment had to begin in the lead up to the wedding and, checking the dates, I realised I would be between the second and third chemo cycle on my wedding day.

I couldn’t help but feel it was incredibly unfair.

But, I had generally been very lucky with chemo – didn’t have many side effects and I’d previously kept my hair – so I felt confident I could handle it again and still enjoy my wedding.

Determined chemo was not going to stop me, I continued working as a primary school teacher all the way through treatment, had my hen party – a peaceful trip to a farm cottage where we played games – then my wonderful siblings surprised me with a trip to Paris for the weekend.

The wedding was the leading star of my show, while chemo was an insignificant bit part.

We married at The Waldorf Hilton hotel, London, with 300 family and friends watching, who all knew that we’ve both battled cancer and won. It was truly special.

Exchanging our vows brought pure happiness, it felt very personal and we had a night of sheer joy. I felt like a princess who’d found her prince.

Ours is a story of courage and faith and we will never stop sharing it; I want it to bring hope to others going through treatment

On my wedding day cancer didn’t even get a look in. Instead it was the day Alex and I showed the world that there is life during and after cancer.

Ours is a story of courage and faith and we will never stop sharing it; I want it to bring hope to others going through treatment.

Currently, I am once again clear of cancer. I’m having regular scans and tablets daily and, as I am a carrier of the BRCA1 gene mutation with an increased risk of breast cancer, I made the decision to have a double mastectomy in December just gone. I’m recovering well, and am now down from 80% to just a 4% risk of developing breast cancer.

I’m focused on my work, I love teaching kids and although they feel like my family, we’ve talked about having our own children via adoption. Making future plans is exciting but I’m appreciative of day-to-day life, spending time with Alex, and when we’re ready, we’ll go for it.

As told to Louisa Gregson