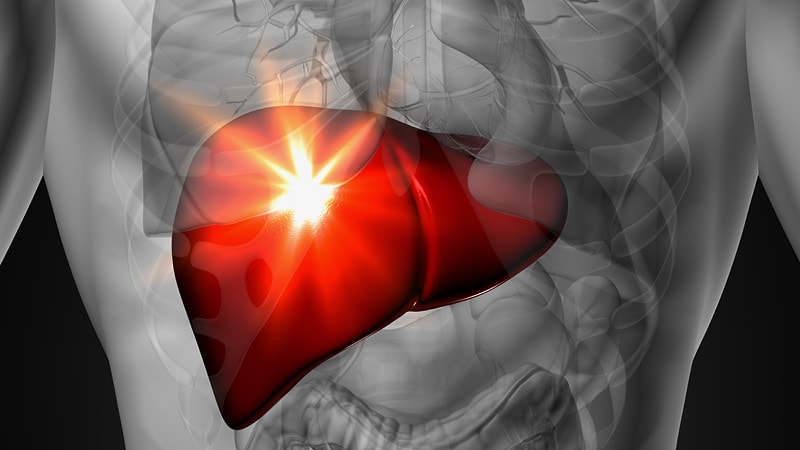 A new study confirms the very high risk of hepatocellular carcinoma (HCC) faced by patients with cirrhosis who have been cured of hepatitis C, a finding the researchers hope will encourage clinicians to communicate risk information to patients and encourage regular HCC screening.

On average, the predicted probability of HCC in cirrhosis patients was 410 times greater than the equivalent probability in the general population, the study team found.

“As the prospect of HCV elimination approaches, a key challenge to the clinical community is the management of those who are cured of HCV but have a residual risk of HCC,” write Hamish Innes, PhD, with Public Health Scotland, Glasgow, United Kingdom, and colleagues.

“Central to this is ensuring that cured cirrhosis patients understand the risk of HCC and are provided with appropriate surveillance,” they add.

The “important” finding in this study “should be conveyed to patients, as this may help improve screening adherence rates,” Beri said.

The study was published online June 24 in the American Journal of Gastroenterology.

Innes and colleagues compared the predicted probability of HCC in 1803 Scottish adults (mean age, 50 years; 74% male) with cirrhosis and cured hepatitis C to the background risk in the general population of Scotland.

This contrasts with a 3-year HCC probability in the general population ranging from < 0.0001% to 0.25% depending on demographics.

All patients with cirrhosis — even those at lowest risk — had a higher probability of HCC than the general population, but there was considerable heterogeneity from one patient to the next.

For example, the mean 3-year predicted probability was 18 times higher in the top quintile (9.8%) vs the lowest quintile (0.5%) of risk, the researchers found.

They could not identify a patient subgroup who exhibited a similar HCC risk profile to the general population, as was their hope going into the study.

Innes and colleagues have developed an online tool that allows clinicians to frame a patient’s 3-year HCC probability against the equivalent probability in the general population.

In the future, they say the scope of the tool could be extended by incorporating general population data from countries beyond Scotland.

“Our hope is that this tool will springboard patient-clinician discussions about HCC risk, and could mitigate low screening uptake,” Innes and colleagues write.

Commenting on the study for Medscape Medical News, Nancy Reau, MD, section chief of hepatology at Rush University Medical Center in Chicago, Illinois, said curing HCV is “very important and significantly reduces risk for complications, but it doesn’t return you to the normal population.”

Reau’s advice to cirrhosis patients: “Get screened twice a year.”

Beri said in addition to conveying this risk to patients, “it is also important to disseminate this information to the community and to primary care practices, particularly as some patients may not currently follow in a specialized liver disease clinic.”

Also weighing in on the study, Amit Singal, MD, chief of hepatology at UT Southwestern Medical Center in Dallas, Texas, said this study highlights that underlying cirrhosis is “the strongest risk factor for the development of HCC.”

In contrast to other cancers, such as breast and colorectal cancer, in which high risk populations can be identified by readily available information, such as age and sex, implementation of HCC screening programs requires identification of patients with cirrhosis, Singal noted.

“Underuse of HCC screening in clinical practice is often related to providers having difficulty at this step in the process and contributes to the high proportion of HCC detected at late stages,” he told Medscape Medical News.

“Availability of accurate noninvasive markers of fibrosis will hopefully help with better identification of patients with cirrhosis moving forward,” Singal said, “although we as hepatologists need to work closely with our primary care colleagues to ensure these tools are used routinely in at-risk patients, such as those with nonalcoholic fatty liver disease, alcohol-associated liver disease, or history of cured (post-SVR) hepatitis C infection.”

The study was supported by the Medical Research Foundation and Public Health Scotland. Innes, Beri, Reau, and Singal report no relevant financial relationships.