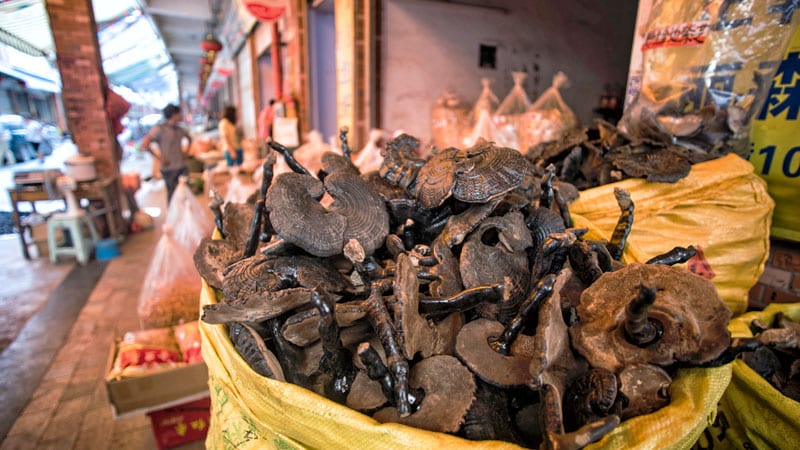 Early trials are under way to test medicinal mushrooms and Chinese herbs to treat COVID-19 patients with mild to moderate symptoms.

The US Food and Drug Administration (FDA) approved the MACH-19 trials (the acronym for Mushrooms and Chinese Herbs for COVID-19) after researchers applied for approval in April.

The first two phase 1 randomized, double-blind, placebo-controlled trials have begun at UCLA and the University of California San Diego to treat COVID-19 patients who were quarantining at home with mild to moderate symptoms. A third trial is investigating the use of medicinal mushrooms as an adjuvant to COVID-19 vaccines.

The researchers have also launched a fourth trial testing the mushrooms against placebo as an adjunct to a COVID booster shot. It looks at the effect in people who have comorbidities that would reduce their vaccine response. An article in JAMA last week described the trials.

The two mushroom varieties being tested — turkey tail and agarikon — are available as over-the-counter supplements, according to the report. They are a separate class from hallucinogenic or “magic” mushrooms being tested for other uses in medicine.

“They are not even as psychoactive as a cup of tea,” Gordon Saxe, MD, PhD, MPH, principal investigator for the MACH-19 trials, told Medscape Medical News.

For each of the MACH-19 treatment trials, researchers plan to recruit 66 people who are quarantined at home with mild to moderate COVID-19 symptoms. Participants will be randomly assigned either to receive the mushroom combination, the Chinese herbs, or a placebo for 2 weeks, according to the JAMA paper.

D. Craig Hopp, PhD, deputy director of the Division of Extramural Research at the National Center for Complementary and Integrative Health (NCCIH), told JAMA in an interview that he was “mildly concerned” about using mushrooms to treat people with active SARS-CoV-2 infection.

“We know that a cytokine storm poses the greatest risk of COVID mortality, not the virus itself,” Hopp said. “The danger is that an immune-stimulating agent like mushrooms might supercharge an individual’s immune response, leading to a cytokine storm.”

Stephen Wilson, PhD, an immunologist who consulted on the trials when he was chief operating officer of the La Jolla Institute for Immunology, says in the JAMA article that a cytokine storm is unlikely for these patients because the mushroom components “don’t mimic inflammatory cytokines.” Wilson is now chief innovations officer at Statera Biopharma.

“We think the mushrooms increase the number of immunologic opportunities to better see and respond to a specific threat. In the doses used, the mushrooms perturb the immune system in a good way but fall far short of driving hyper or sustained inflammation,” Wilson said.

Saxe said the FDA process was extensive and rigorous and FDA investigators also asked about potential cytokine storms before approving the trials. Cytokine storm is not an issue with a healthy response, Saxe pointed out. It’s a response that’s not balanced or modulated.

“Mushrooms are immunomodulatory,” he said. “In some ways they very specifically enhance immunity. In other ways they calm down overimmunity.” Saxe noted that they did a sentinel study for the storm potential “and we didn’t see any evidence for it.”

“Not a Crazy Concept”

Saxe pointed out that one of the mushrooms in the combo they use — agarikon — was used to treat pulmonary infections 2300 years ago.

“Hippocrates, the father of western medicine, used mushrooms,” he said. “Penicillin comes from fungi. It’s not a crazy concept. Most people who oppose this or are skeptics — to some extent, it’s a lack of information.”

Saxe explained that there are receptors on human cells that bind specific mushroom polysaccharides.

“There’s a hand-in-glove fit there,” Saxe said, and that’s one way mushrooms can modulate immune cell behavior, which could have an effect against SARS-CoV-2.

Daniel Kuritzkes, MD, chief of the Division of Infectious Diseases at Brigham and Women’s Hospital in Boston, Massachusetts, who was not part of the study, told Medscape Medical News said he wasn’t surprised the FDA approved moving forward with the trials.

“As long as you can demonstrate that there is a rationale for doing the trial and that you have some safety data or a plan to collect safety data, they are fairly liberal about doing early-phase studies. It would be a much different issue, I think, if they were proposing to do a study for actual licensing or approval of a drug,” Kuritzkes said.

As yet unanswered, he noted, is which component of the mushrooms or herbs is having the effect. It will be a challenge, he said, to know from one batch of the compound to the next that you have the same amount of material and that it’s going to have the same potency among lots.

Another challenge is how the mushrooms and herbs might interact with other therapies, Kuritzkes said.

He gave the example of St. John’s Wort, which has been problematic in HIV treatment.

“If someone is on certain HIV medicines and they also are taking St. John’s Wort, they basically are causing the liver to eat up the HIV drug and they don’t get adequate levels of the drug,” he said.

Though there are many challenges ahead, Kuritzkes acknowledged, but added that “this is a great starting point.”

He, too, pointed out that many traditional medicines were discovered from plants.

“The most famous of these is quinine, which came from cinchona bark that was used to treat malaria.” Kuritzkes said. Digitalis, often used to treat heart failure, comes from the fox glove plant, he added.

He said it’s important to remember that “people shouldn’t be seeking experimental therapies in place of proven therapies, they should be thinking of them in addition to proven therapies.”

A co-author reports an investment in the dietary supplement company Mycomedica Life Sciences, for which he also serves as an unpaid scientific adviser. Another co-author is a medical consultant for Evergreen Herbs and Medical Supplies. Hopp, Saxe, and Wilson have disclosed no relevant financial relationships. Kuritzkes consults for Merck, Gilead, and GlaxoSmithKline.

Marcia Frellick is a freelance journalist based in Chicago. She has previously written for the Chicago Tribune, Science News, and Nurse.com, and was an editor at the Chicago Sun-Times, the Cincinnati Enquirer, and the St. Cloud (Minnesota) Times. Follow her on Twitter at @mfrellick