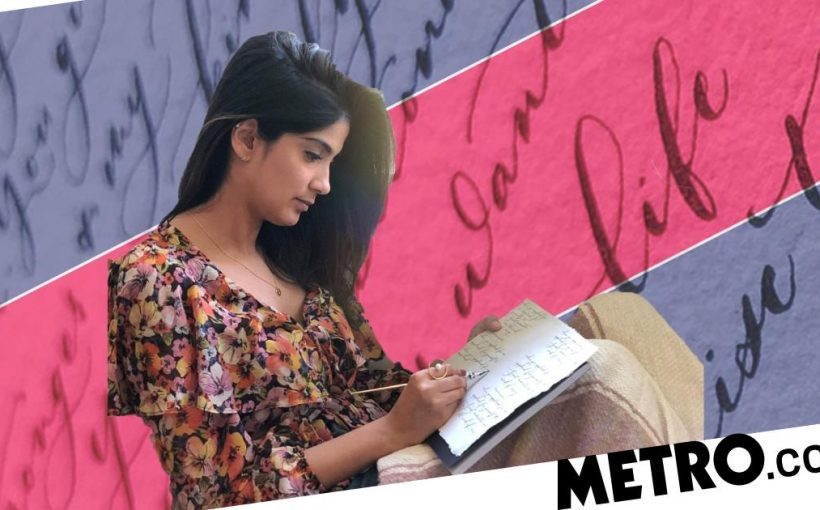 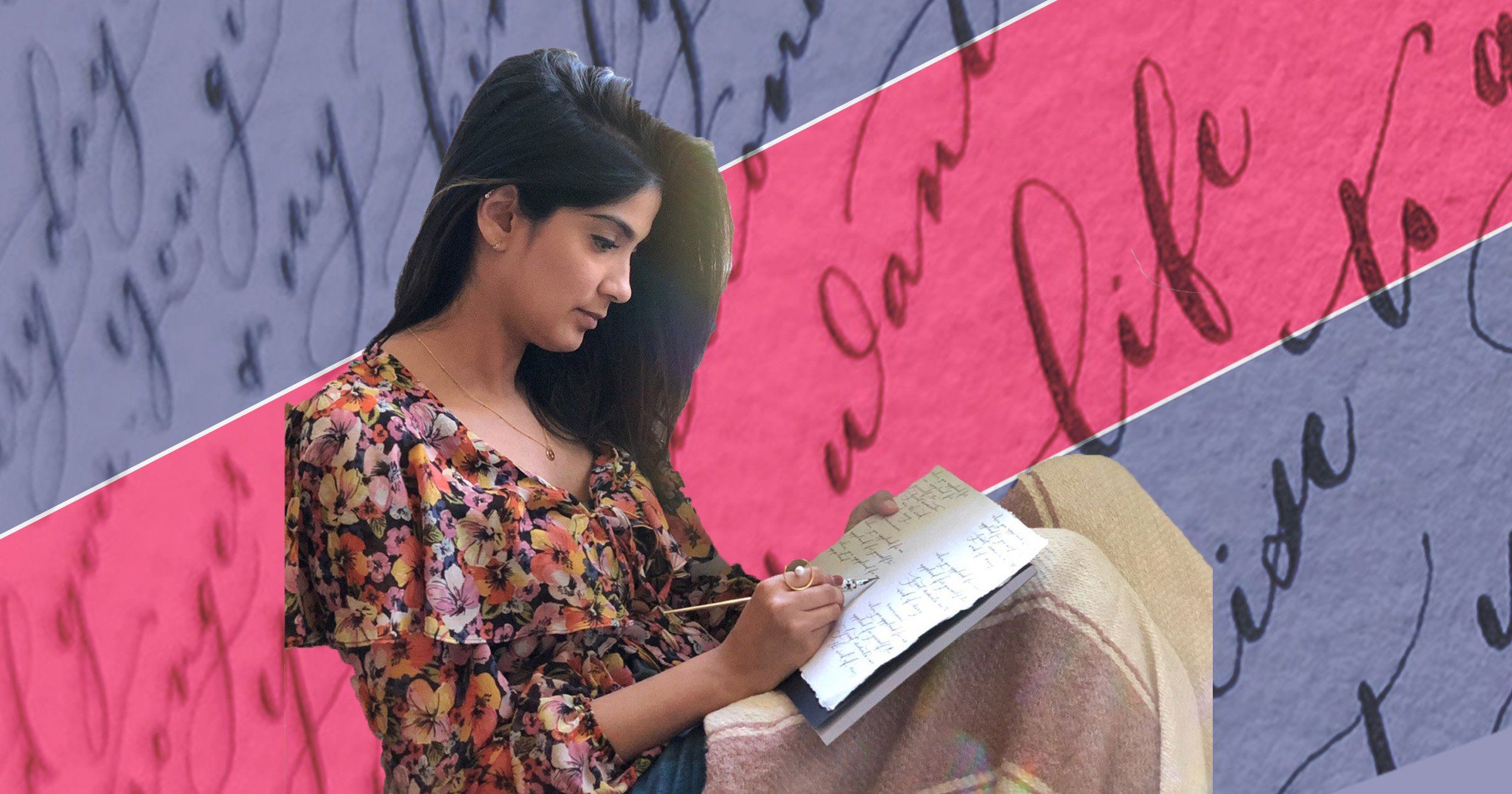 Over the past few years, we’ve been told all kinds of things can help with mindfulness – including yoga, breathing techniques and various mental health apps.

But sometimes when we try to be mindful – and shut out the world around us – our brains do the opposite and spiral with thoughts.

This is something NHS doctor Sneha Narayan has struggled with for many years.

‘If I’m trying to meditate, I just simply cannot switch off,’ the 32-year-old tells Metro.co.uk. ‘So when I’ve tried meditation in the past – when I’ve actively told my brain switch off – it just does the opposite. It runs at like 100mph.’

But around four years ago, during a particularly stressful period in her life, Sneha discovered calligraphy – and found it transformed both her personal and professional life.

She explains: ‘I started learning it because I was struggling to switch off from my day job. I just stepped up to an SHO, the senior house officer role, and it was a new hospital. I’ve moved from Southampton to Hertfordshire and there was a lot of stress because it was a big move.

‘So it was a new job, all of that put together – and I was really struggling to switch off. Also, I was having problems sleeping and I was finding the whole change quite anxiety-provoking.’

As someone who has always enjoyed creative pursuits, Sneha taught herself calligraphy from scratch after buying supplies from her local craft store.

She used Instagram and YouTube to teach herself the basics and found herself totally absorbed by the hobby.

‘I just turned it into a routine and I found myself gaining a huge amount of control over my own mental wellbeing,’ explains Sneha.

‘It’s helped me both in my personal and my professional life. So in my personal life, I find my quality of sleep is dramatically better and I actually actively practice more calligraphy when I’m more stressed, because it just does allow me to switch off before bed.

‘It’s improved my overall health, in general, too. I wouldn’t call myself a hugely anxious person – but I think, because of the job that I do, it’s really difficult not to bring work home – but having the calligraphy there is a way to put a stop to it.

‘Often, when I come home, I ruminate about a certain patient, and calligraphy stops me from doing that.’

Sneha says calligraphy helped her dramatically when the pandemic hit and she was working long and difficult days in the hospital.

And, because she found the benefits of calligraphy so life-changing, she also brought out her own DIY kits during the pandemic – to help others who were struggling.

‘I think that’s what continues to inspire me about calligraphy is that – no matter how uncertain the rest of the world looks, I know that I have a way to switch off,’ Sneha continues.

‘And having that power of knowing I have something guaranteed to make me calm down is a huge placebo effect in itself.

‘It’s a huge amount of power that you gain in your mind.’

Now, Sneha offers courses on calligraphy and has even created her own business, Paint Pots & Quills, and has been commissioned by brands like Jo Malone and Oliver Bonas – and even worked at Cannes Film Festival.

She stresses calligraphy, like many other creative pursuits, has so many mindful benefits.

A total switch off

Sneha says firstly, as mentioned above, she thinks it helps people fully switch-off from their problems.

And she sees this in action during her workshops.

‘I ask them to do that and don’t tell them why. Then, at the end of the workshop, I tell them to open that piece of paper again and ask if any, during the process of the workshop, have thought about that. It’s almost always unanimously “no.”

‘I think because calligraphy is both pressure and directional movement, it requires a lot of hand-eye coordination and you build muscle memory through it. This means that you cannot then also be thinking about something else.’

She adds: ‘I think what I’ve learned through the art and creativity is that it’s sort of like re-igniting your inner child.

‘Children get down to get their hands messy and if they have been creating a piece, they never worried about the end result. They can draw the most awful thing on the planet and they will come and show it off with pride because they don’t care.

‘It’s only as adults that we start holding ourselves up to these impossible standards.

‘I constantly champion having something – it doesn’t have to be calligraphy – but anything that allows you a guaranteed mindful moment, because it gives you so much control.’

Sneha also stresses the accessibility of calligraphy makes it a great option to try. After all, most people write every day.

She continues: ‘I think a lot of people think that you have to have good handwriting to learn calligraphy but, I mean, I’m a doctor – we have a reputation for our writing – but my everyday writing is no way near my calligraphy standard.

‘Calligraphy is an art form, it forces you to slow down. You do not write in calligraphy at the same speed as you do with your handwriting. So you absolutely do not need to have good handwriting to start learning, it’s completely different.

‘It’s a basis you need to be able to write words and that will certainly help but it’s absolutely not something that’s needed – so it’s something that’s so attainable. I think it’s almost like a lost art.

‘It’s so simple. It’s just words and we all write words every single day. We know how to write the alphabet. It’s just obviously a little bit more complicated than that. So at least a big part of it feels quite attainable.’

Easy to get started with

Sneha also adds that while some forms of calligraphy are complex, not all of them have to be.

‘The type of calligraphy that I teach is modern calligraphy. And, honestly, it doesn’t have any rules.

‘Every single modern calligrapher has a different sort of script and a different way they write. So there are no rules to this – and it’s something that is so much more attainable.

‘It’s also a functional skill as well as being something that is super, super mindful.’

More information one Sneha’s courses and kits can be found here.