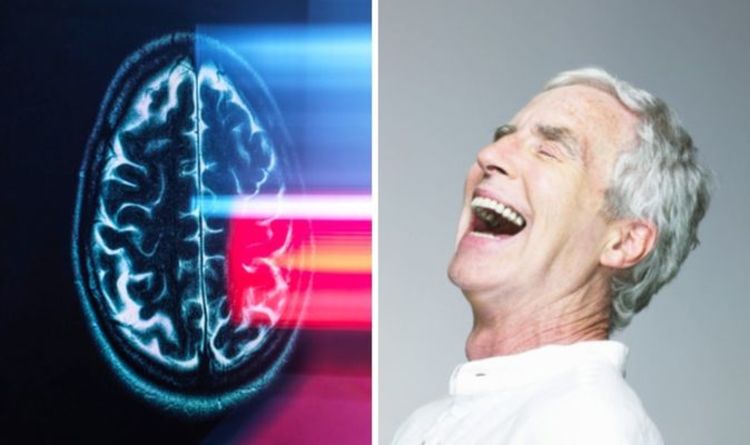 Dementia is a syndrome, not a specific condition, it’s a group of related symptoms associated with an ongoing decline of brain functioning. Alzheimer’s disease and vascular dementia are types of dementia, but there are many different causes of dementia and over 200 subtypes. Dementia can impact your mood, behaviour and emotions, including what you find funny.

According to WebMD, a change in a person’s sense of humour could be an “early red flag” of dementia. Here’s how.

Dementia is on the rise because people are living longer and it is estimated that by 2025 there will be more than one million people in the UK with the forgetful syndrome.

The symptoms of dementia differ slightly from person to person, depending on which type of dementia they have and what part of the brain is affected, but the general symptoms are:

Dementia can make socialising and relationships difficult for people with dementia and they may even lose interest.

People with dementia may lose interest in their usual activities and have problems managing their behaviour and emotions.

This can include feeling a loss of who they are and being more aggressive.

A 2015 study by the team at University College London found that your sense of humour can change with dementia.

The study looked at changes in people with Alzheimer’s, the most common cause of dementia, and frontotemporal dementia, which is more common in younger people.

Frontotemporal dementia tends to change your personality, behaviour and understanding of language rather than your memory, and the researchers noticed a change in what these individuals found funny.

For example, people with frontotemporal dementia laughed at events others would not consider funny such as a badly parked car or a barking dog.

The study concluded that people with the type of frontotemporal dementia that affected their personality tend to have a “sick” sense of humour.

These people might laugh at tragic events on the news or in their personal life, unlike people with Alzheimer’s.

If you have Alzheimer’s, you’re more likely to prefer ‘slapstick’ humour to ‘satirical’ or ‘absurdist’ humour.

Keeping an eye out for these humour changes could help with early diagnosis, as the friends and relatives in the study reported these changes at least nine years on average before the more typical dementia symptoms showed.

The leader of the research study at UCL, Dr Camila Clark said: “As sense of humour defines us and is used to build relationships with those around us, changes in what we find funny has impacts far beyond picking a new favourite TV show.

“We’ve highlighted the need to shift the emphasis from dementia being solely about memory loss.

“These findings have implications for diagnosis – not only should personality and behaviour changes ring alarm bells, but clinicians themselves need to be more aware of these symptoms as an early sign of dementia.

“As well as providing clues to underlying brain changes, subtle differences in what we find funny could help differentiate between the different diseases that cause dementia.

“Humour could be a particularly sensitive way of detecting dementia, because it puts demands on so many different aspects of brain function, such as puzzle-solving, emotion, and social awareness.”