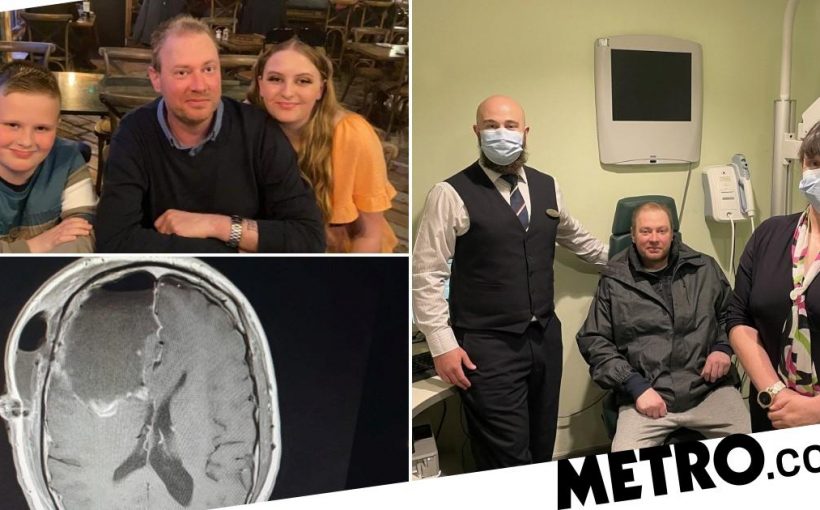 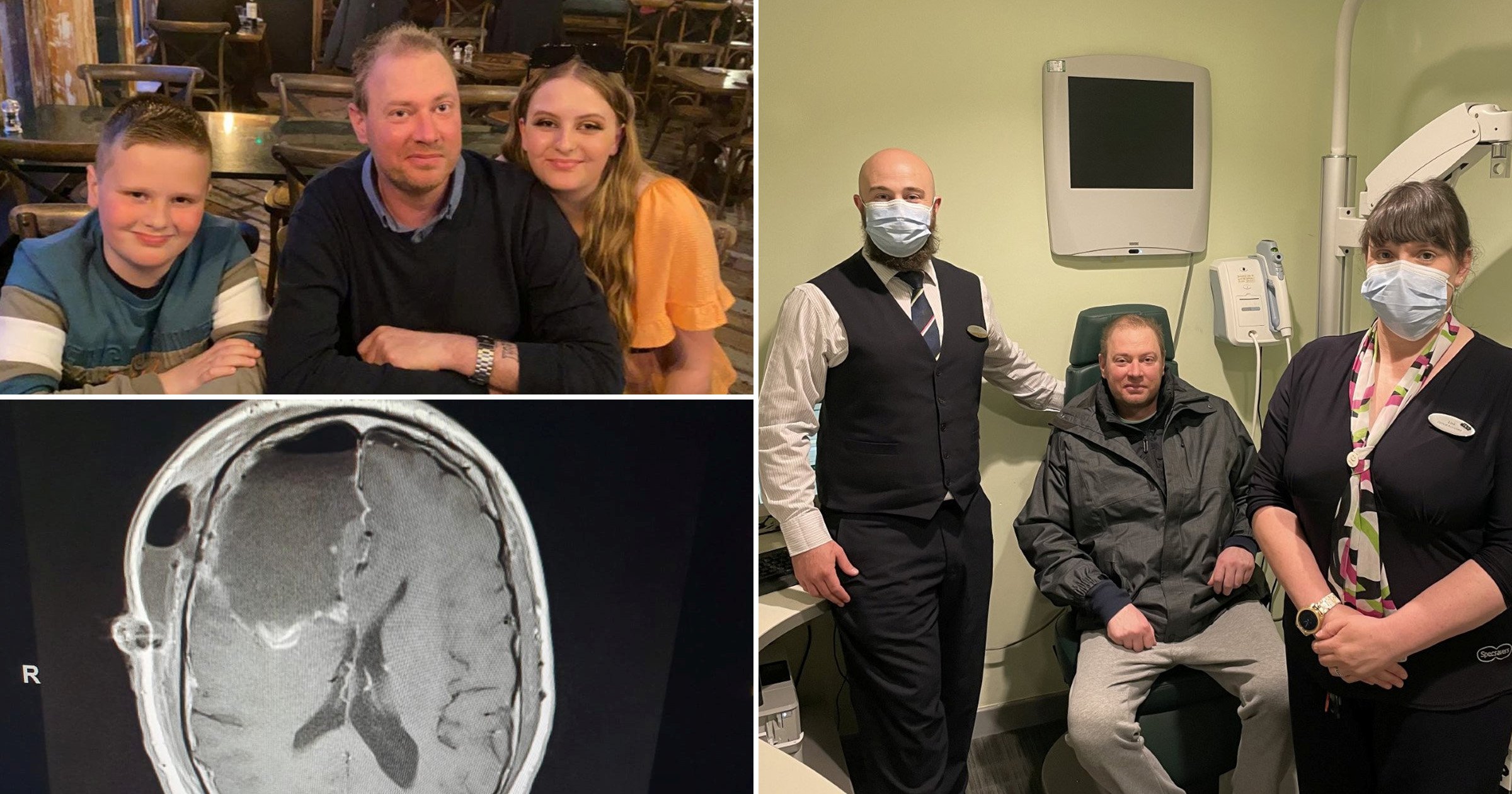 A man who suffered excruciating headaches, dizziness and blackouts for nearly eight years finally got a diagnosis thanks to a trip to the opticians.

Dad-of-two Matt Voice started to struggle with dizziness when he was 32.

He became more concerned about his health when he started to get vision problems and powerful headaches.

Matt, 40, even needed to go to Worthing Hospital A&E, West Sussex, after he collapsed, but the whole thing was put down to high blood pressure.

After he started seeing ‘black orbs’ that clouded his vision, Matt booked himself in for an appointment at Specsavers in April 2020.

It’s thanks to that eye appointment that Matt was eventually diagnosed with astrocytoma glioma – a type of brain cancer – in the following month.

Matt, who’s dad to Mason, 11, and Darcy, 15, said: ‘If I hadn’t pushed for my optician appointment I wouldn’t be here today.

‘It didn’t sink in when they told me I had brain cancer – I wasn’t expecting it at all.

‘It’s been hard for my children to see me like this – I’m still their dad but I look different.

‘They have seen me have a seizure which no kid should have to see.’

Matt, from Lancing, West Sussex, needed to have a partial craniotomy to remove 70% of the tumour on one side of his brain, as well as chemotherapy and radiotherapy.

‘The part of the tumour removed was the size of a fist,’ Matt said.

Now, his cancer is under control, but he suffers with short-term memory loss and struggles with his mobility and coordination.

He ended up closing his business where he worked as a technical mobile mechanic and moving back with his mum, Bev Gargate, 64, who’s a part-time nurse.

He said: ‘It’s frustrating now that I forget things – even what day or month it is.

‘Now it’s just a waiting game to see if the tumour will grow.

‘But I’m so glad I went to Specsavers – that appointment may well have saved my life.

‘I was driving and had to pull over because my vision just went all blurry and I felt sick. But doctors kept saying it was my blood pressure.

‘As my eyesight was getting worse, I pushed to get an optician’s appointment. It nearly got cancelled because of Covid, but I pushed to go.’

It was the optician who spotted that Matt had papilledema thanks to his swollen optic disks and referred him for a hospital appointment.

There, they found a legion on his brain, and a further appointment with a consultant in Brighton Royal Hospital, Brighton, East Sussex, finally resulted in a proper diagnosis.

‘I was told it was on the left and right side of my brain and that it would become aggressive,’ he said.

‘I started suffering seizures and the light would go out in my eyes.’

Matt was only able to go through three rounds of chemo in January 2021 before he became too ill to carry on.

‘I lost all my hair, and I could see the children looking at me differently,’ he said.

‘I’m still their dad, but I can’t do anything with them anymore.

Denis Youngman, a director optometrist at the Specsavers’ Worthing store, said: ‘Matthew came to visit us in 2020, during the first lockdown.

‘He complained of a number of odd symptoms, which had led to an A&E admission a few days earlier. A&E made a referral to routine referral to neurology, which would have had him waiting weeks.

‘However, I felt his case warranted an urgent in-store examination.

‘During the examination I found his vision to be reduced and, more importantly, the optic nerve heads in both eyes appeared to be swollen. This was highlighted on one of the two OCT machines we have in store.

‘As a result, I referred him immediately to the eye department in Southlands Hospital.

‘Many of these cases turn out to be benign intra-cranial pressure, however, Matthew called to inform me that it was a brain tumour and urgent surgery was planned. He recently booked in to see me recently, and you can imagine how pleased I was to see Matthew making a good recovery.’

While his cancer is now under control, Matt’s been told that his tumour is likely to grow, which means he’ll probably need to undergo more treatment.

‘I worked my whole life as a mechanic, so I was very switched on.

‘Now I struggle to remember something my mum has just told me or what the date is.

‘I have to have a stair lift in the home and at 40 years old I’ve moved back in with my mum.’

Matt now needs to ‘watch and wait’ to see what the tumour does.

‘It’s horrible waiting for the results of the MRI to see if it has grown,” he said.

‘I just have to pray it hasn’t each time.

‘I’m just glad I went to the opticians when I did – otherwise I don’t think I’d be here for my children.’