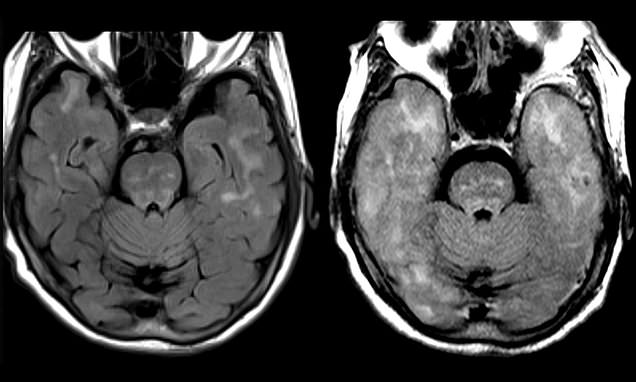 A third patient has died while being treated with an experimental Alzheimer’s drug that doctors hope will herald the ‘beginning of the end’ for the condition.

The unnamed 79-year-old woman from Florida suffered extensive swelling and bleeding in the brain after receiving the treatment for more than 18 months. She was admitted to hospital with seizures in mid-September, and died five days later.

The patient was in the extension phase of the phase 3 trials for antibody drug lecanemab, backed by biotech company Eisai. The treatment works by clearing amyloid-beta proteins from the brain, thought to cause Alzheimer’s.

It is the latest blow to trials of the drug which found it could slow the progression of Alzheimer’s by 27 percent in 18 months in the core part of the phase 3 trial. The Food and Drug Administration (FDA) is expected to rule on whether to approve the drug for use in the US next month. 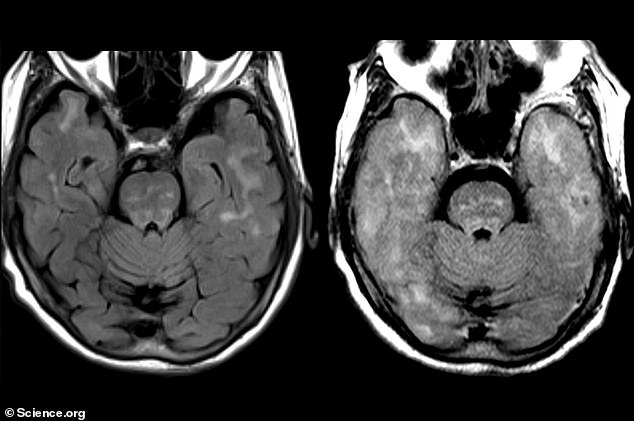 The above scans show the woman’s brain before treatment with the antibody (left) and afterwards (right). Her brain became swollen during the treatment and showed signs of bleeding

The latest death in the trial was revealed in the journal Science. It is linked to bleeding and swelling in the brain.

It follows two other deaths during the extension phase, including a man in his late 80s dying in June of a brain hemorrhage, and the death of a 65-year-old woman from Illinois.

Experts at the Tokyo, Japan-based biotechnology company said the fatalities were likely due to other factors.

They linked the man’s death to a blood thinner he was also using and saying the woman’s was due to other medical problems.

A spokesman said: ‘All serious events, including fatalities, are reported to Eisai and considered in our evaluation of the study.

Everything you need to know on Alzheimer’s drug lecanemab

What does it do?

Lecanemab is a drug that is injected bi-weekly to those suffering from early Alzheimer’s.

The antibody treatment, created by Japanese and US pharmaceutical giants Eisai and Biogen, combats the build-up of plaque in the brain, which is thought to be behind Alzheimer’s.

What did trials show?

The Phase III trial of lecanemab evaluated the drug’s ability to reduce cognitive and functional decline among 1,795 patients with early Alzheimer’s.

Half of participants were given 10mg/kg of the drug bi-weekly, while the others were given a placebo drug.

Results showed that those given lecanemab saw their mental condition decline 27 per cent less than those given the dummy treatment.

The lecanemab group also experienced a slower build up of amyloid levels in the brain, scans showed.

Is the drug dangerous?

The pharma giants said the figures fall within an expected range.

And one patient in the US reportedly died while taking lecanemab during clinical trials, after suffering a brain bleed.

However, Eisai and Biogen noted that all available safety information shows the therapy is not linked with an increased risk of death.

How close is it to being rolled out?

The drugmakers are seeking approval for lecanemab from the US Food and Drug Administration, with a decision expected in early January.

The companies say they will also submit their findings to regulators in Japan and Europe to by April 2023.

However, watchdogs will then need to assess whether the drug is safe and effective before making a decision, so it is unclear when the treatment could be rolled out.

How is it different to similar drug Aduhelm?

Both Aduhelm and lecanemab — which are both made by Eisai and Biogen — are antibodies designed to remove amyloid deposits.

However, lecanemab targets amyloid that has not yet clumped together, while Aduhelm removed amyloid plaques that built up in the brain.

Aduhelm’s approval was a rare bright spot for Alzheimer’s patients, but critics have warned about the underwhelming results of the drug and highlighted its risks.

‘This information is provided to the FDA and other regulatory authorities, as well as independent review boards for the study.’

A total of 13 deaths were recorded in the core trail of 1,800 participants.

It was not clear whether these were linked to the drug or other factors, but all participants had early Alzheimer’s and had an average age of 71 years old,

People with Alzheimer’s can live for several years after the first symptoms appear.

Most patients live for three to 11 years after diagnosis, according to the Mayo Clinic.

Patients were initially recruited to the phase three core trials which lasted for 18 months, before being moved into the six-week extension phase where they received doses of the drug every other week.

The latest patient to die in the trial had gone through the core phase without issue, and was then moved into the extension phase.

But her family, revealing the case anonymously, said that after the first shot she became so tired she stayed in bed for two days – only leaving to go to the bathroom or eat a snack.

In mid-September she appeared to suffer a stroke while at a restaurant.

The woman was rushed to hospital where she began suffering seizures. They were  so severe she started thrashing her arms and legs – requiring restraints for her own safety.

The patient started to suffer from multiorgan failure and pneumonia. She died five days later.

Doctors reviewing the case said it was likely that lecanemab was behind the death, noting the patient had no underlying conditions.

When she was moved on to the extension phase a brain scan revealed signs of a few microhemorrhages, although these were not serious enough for her to be excluded.

Dr Ellis van Etten, a neuroscientist at Leiden University in Germany, told Science: ‘The brain swelling and the microhemorrhages … could be a serious side effect of the study medication.’ He said this should be evaluated by trial investigators.

Lecanemab is one of several experimental Alzheimer’s drugs that targets amyloid-beta proteins, which build up in the brains of people in the disease.

Many scientists argue this build up is responsible for the disease, although deposits of the protein are also seen in the brains of healthy people.

The amyloid-seeking antibodies help to remove the proteins, but in the process can cause brain swelling and bleeding.

This is a condition medically termed amyloid-related imaging abnormalities (ARIA) because it is diagnosed via brain scans.

About half of Alzheimer’s patients also have cerebral amyloid angiopathy CAA, in which amyloid-beta plaques replace the muscle in the walls of blood vessels.

When these are stripped away by antibodies, it can weaken and inflame the blood vessels raising the risk of them bursting.

The FDA is set to rule on whether the treatment can be used in the US next month, while the European Medicines Agency — Europe’s leading medicine regulator — is expected to take a view later in 2023.