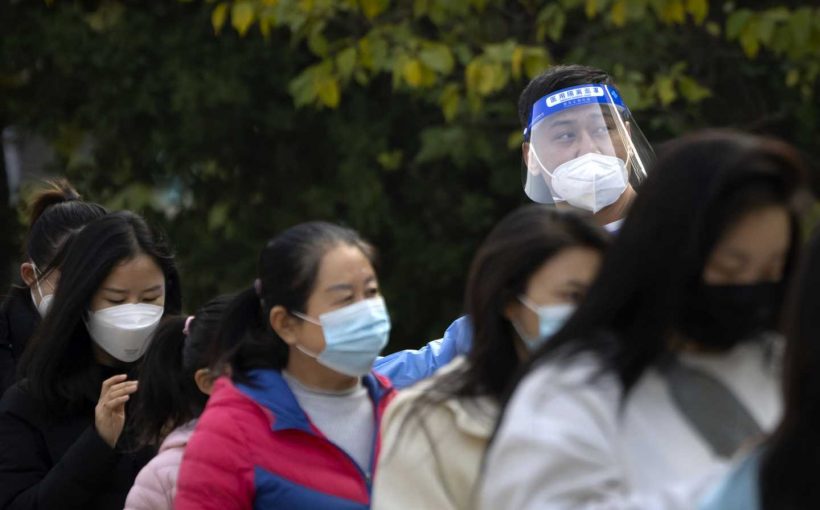 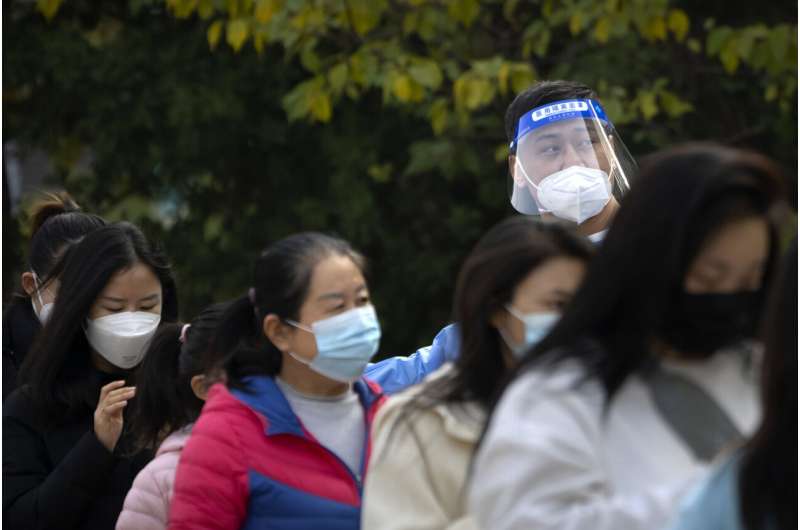 China’s capital Beijing has closed city parks and imposed other restrictions as the country faces a new wave of COVID-19 cases.

Elsewhere, more than 5 million people were under lockdown Friday in the southern manufacturing hub Guangzhou and the western megacity Chongqing.

The country reported 10,729 new cases on Friday, almost all of them testing positive while showing no symptoms.

With the bulk of Beijing’s 21 million people undergoing near daily testing, another 118 new cases were recorded in the sprawling city. Many city schools switched to online classes, hospitals restricted services and some shops and restaurants were shuttered, with their staff taken to quarantine. Videos on social media showed people in some areas protesting or fighting with police and health workers.

The government has said it was reducing the amount of time incoming passengers would be required to undergo quarantine, but it wasn’t immediately clear when and where the rules would take effect and to whom they would apply. The U.S. Embassy this week renewed its advisement for citizens to avoid travel to and within China unless absolutely necessary.

“It has become normal, just like eating and sleeping,” said food service worker Yang Zheng, 39. “I think what it impacts most is kids because they need to go to school.” 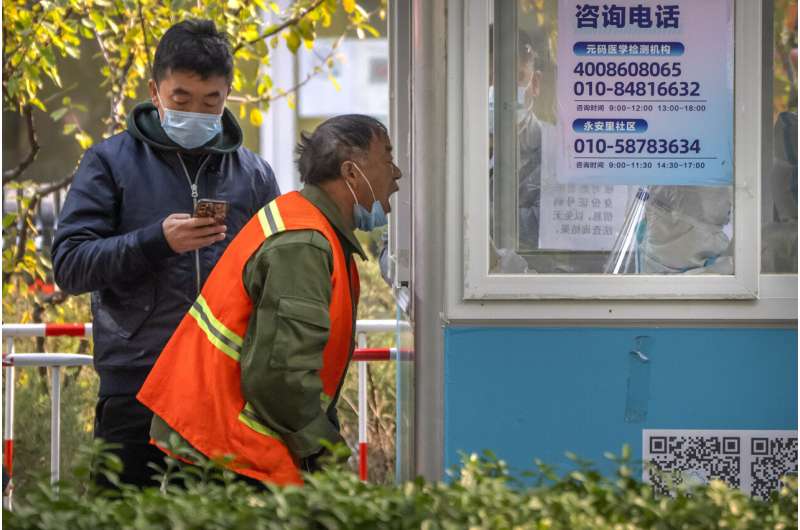 Demands for testing every 24 to 48 hours are “troublesome,” said Ying Yiyang, who works in marketing.

“My life is for sure not comparable to what it was three years ago,” said Ying. Family visits outside of Beijing can be difficult if the smartphone app that virtually all Chinese are required to display does not green-light travel back to the capital, Ying said.

Numerous villages on the capital’s outskirts that are home to blue-collar workers whose labor keeps the city running were under lockdown. Many live in dormitory communities, which taxi and ride-sharing drivers said they were avoiding so as not to be placed in quarantine themselves.

Lockdowns in Guangzhou and elsewhere were due to end by Sunday, but authorities have repeatedly extended such restrictions with no explanation.

Chinese leaders promised Thursday to respond to public frustration over its severe “zero-COVID” strategy that has confined millions to their homes and severely disrupted the economy. 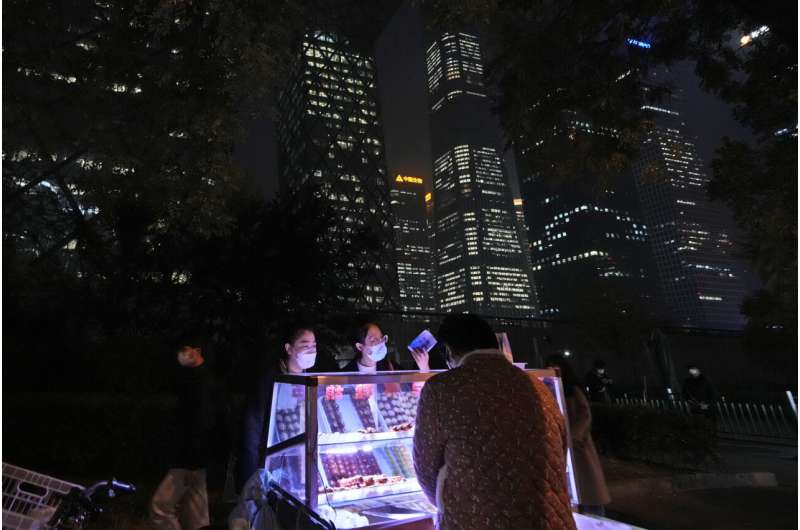 No details were offered other than a promise to release “stranded people” who have been in quarantine or blocked for weeks from leaving cities where there are cases.

“Zero-COVID” has kept China’s infection rate relatively low but weighs on the economy and has disrupted life by shutting schools, factories and shops, or sealing neighborhoods without warning. With the new surge in cases, a growing number of areas are shutting down businesses and imposing curbs on movement. In order to enter office buildings, shopping malls and other public places, people are required to show a negative result from a virus test taken as often as once a day.

With economic growth weakening again after rebounding to 3.9% over a year earlier in the three months ending in September, forecasters had been expecting bolder steps toward reopening the country, whose borders remain largely closed.

President and ruling Communist Party leader Xi Jinping is expected to make a rare trip abroad next week, but has given little indication of backing off on a policy the party has closely associated with social stability and the avowed superiority of his policies.

That has been maintained by its seven-person Politburo Standing Committee, which was named in October at a party congress that also expanded Xi’s political dominance by appointing him to a third five-year term as leader. It is packed with his loyalists, including the former party chief of Shanghai, who enforced a draconian lockdown that sparked food shortages, shut factories and confined millions to their homes for two months or more.

People from cities with a single case in the past week are barred from visiting Beijing, while travelers from abroad are required to be quarantined in a hotel for seven to 10 days—if they are able to navigate the timely and opaque process of acquiring a visa. 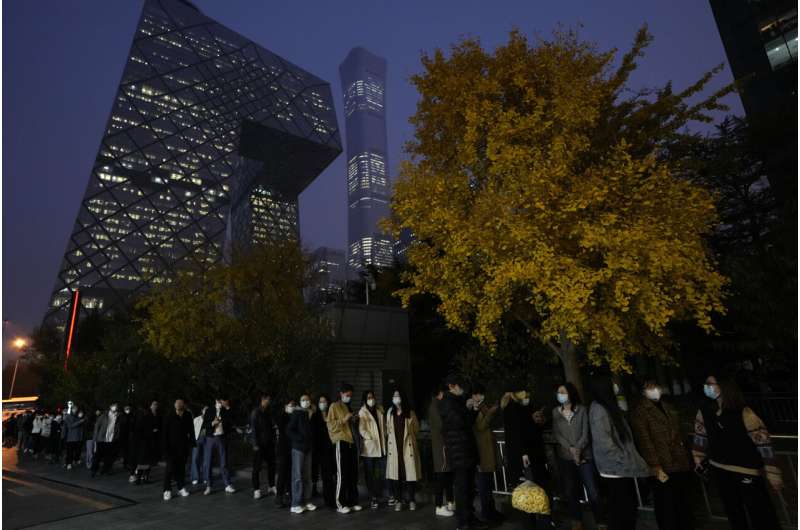 Business groups say that discourages foreign executives from visiting, which has prompted companies to shift investment plans to other countries. Visits from U.S. officials and lawmakers charged with maintaining the crucial trading relations amid tensions over tariffs, Taiwan and human rights have come to a virtual standstill.

Last week, access to part of the central city of Zhengzhou, home to the world’s biggest iPhone factory, was suspended after residents tested positive for the virus. Thousands of workers jumped fences and hiked along highways to escape the factory run by Taiwan’s Foxconn Technology Group. Many said coworkers who fell ill received no help and working conditions were unsafe.

Also last week, people posted outraged comments on social media after a 3-year-old boy, whose compound in the northwest was under quarantine, died of carbon monoxide poisoning. His father complained that guards who were enforcing the closure refused to help and tried to stop him as he rushed his son to a hospital.

Despite such complaints, Chinese citizens have little say in policy making under the one-party authoritarian system that maintains rigid controls over media and public demonstrations.

Speculation on when measures will be eased has centered on whether the government is willing to import or domestically produce more effective vaccines, with the elderly population left particularly vulnerable.

That could come as soon as next spring, when a new slate of officials are due to be named under Xi’s continuing leadership. Or, restrictions could persist much longer if the government continues to reject the notion of living to learn with a relatively low level of cases that cause far fewer hospitalizations and deaths than when the pandemic was at its height.

© 2022 The Associated Press. All rights reserved. This material may not be published, broadcast, rewritten or redistributed without permission.