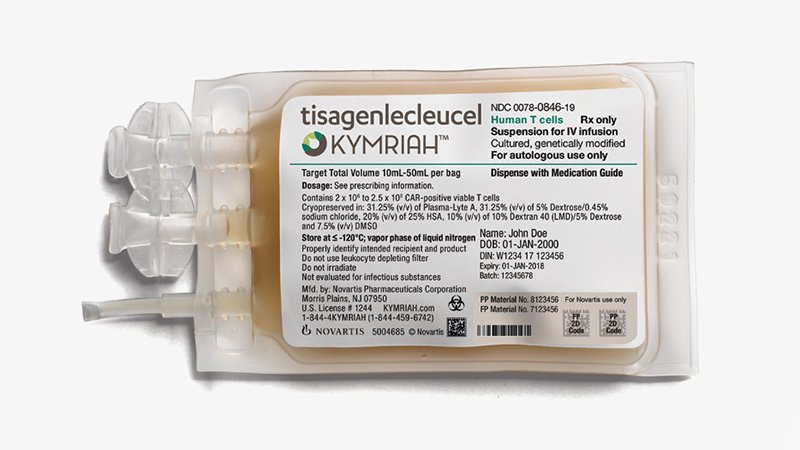 The 12-month duration of response (DOR) and progression-free survival (PFS) rates in 152 real-world patients treated with tisagenlecleucel (tisa-cel; Kymriah) for an approved indication were 48.4% and 26.4%, respectively, data reported to the Center for International Blood and Marrow Transplant Research (CIBMTR) and published in November 2020 in Blood Advances showed.

Those results are similar to the findings of the pivotal phase 2 JULIET trial evaluating tisa-cel in patients with DLBCL who relapsed or were refractory to at least two prior lines of therapy, Corradini said at the third European CAR T-cell Meeting, jointly sponsored by the European Society for Blood and Marrow Transplantation and the European Hematology Association.

A clinical update of the JULIET trial, as presented by Corradini and colleagues in a poster at the 2020 annual conference of the American Society of Hematology, showed a relapse-free probability of 60.4% at 24 and 30 months among 61 patients with an initial response.

The 12- and 36-month PFS rates as of February 2020, with median follow-up of 40.3 months, were 33% and 31%, respectively, and no new safety signals were identified, said Corradini, chair of hematology at the University of Milan.

Similarly, real-world data from the U.S. Lymphoma CAR T Consortium showing median PFS of 8.3 months at median follow-up of 12.9 months in 275 patients treated with axicabtagene ciloleucel (axi-cel; YESCARTA) were comparable with outcomes in the ZUMA-1 registrational trial, he noted.

Of note, 43% of patients in the real-world study, which was published in the Journal of Clinical Oncology in September 2020, would not have met ZUMA-1 eligibility criteria because of comorbidities at the time of leukapheresis.

The authors also looked for “clinical predictive factors or some easy clinical biomarkers to predict the outcomes in our patients receiving CAR T-cells,” and found that C-reactive protein levels of more than 30 mg at infusion were associated with poorer DOR, PFS, and OS, he said.

In 60 patients in another U.S. study of both tisa-cel- and axi-cel-treated patients at Memorial Sloan Kettering Cancer Center, 1-year event-free survival and OS were 40% and 69%, and Corradini’s experience with 55 patients at the University of Milan similarly showed 1-year PFS and OS of 40% and 70%, respectively.

“So all these studies support the notion that the results of CAR T-cells in real-world practice are durable for our patients, and are very similar to results obtained in the studies,” he said.

Other factors that have been shown to be associated with poor outcomes after CAR T-cell therapy include systemic bridging therapy, high metabolic tumor volume, and extranodal involvement; patients with these characteristics, along with those who have poor ECOG performance status or elevated LDH or CRP levels, do not comprise “a group to exclude from CAR T-cell therapy, but rather … a group for whom there is an unmet need with our currently available treatments,” he said, adding: “So, it’s a group for which we have to do clinical trials and studies to improve the outcomes of our patient with large B-cell lymphomas.”

“These are all real-world data with commercially available products, he noted.

Tisa-cel received Food and Drug Administration approval in 2017 and is used to treat relapsed or refractory acute lymphoblastic leukemia in those aged up to 25 years, and non-Hodgkin lymphoma that has relapsed or is refractory after at least two prior lines of therapy.

Axi-cel was also approved in 2017 for relapsed/refractory non-Hodgkin lymphoma, and in February 2021, after Corradini’s meeting presentation, the FDA granted a third approval to lisocabtagene maraleucel (liso-cel; Breyanzi) for this indication.

The information to date from both the trial and real-world settings are limited with respect to showing any differences in outcomes between the CAR T-cell products, but provide “an initial suggestion” that outcomes with tisa-cel and axi-cel are comparable, he said, adding that decisions should be strictly based on product registration data given the absence of reliable data for choosing one product over another.

Corradini reported honoraria and/or payment for travel and accommodations from Abbvie, Amgen, Bristol-Myers Squibb, Celgene, Daiichi Sankyo, and a number of other pharmaceutical companies.