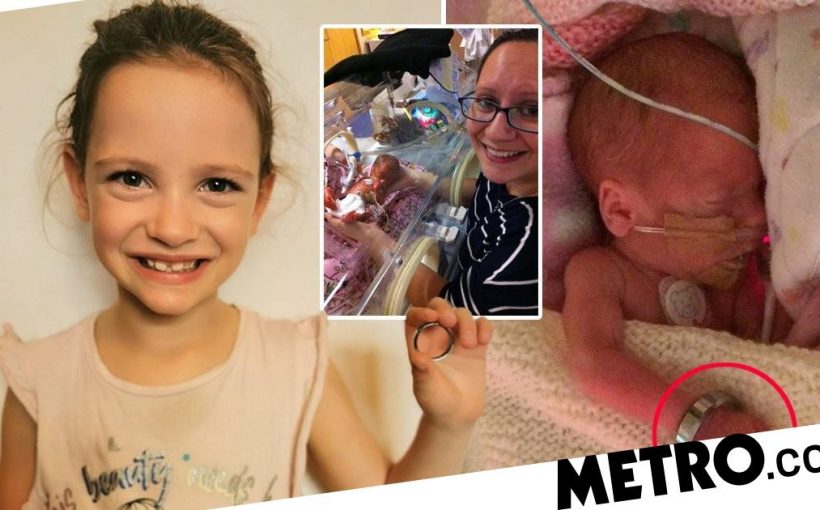 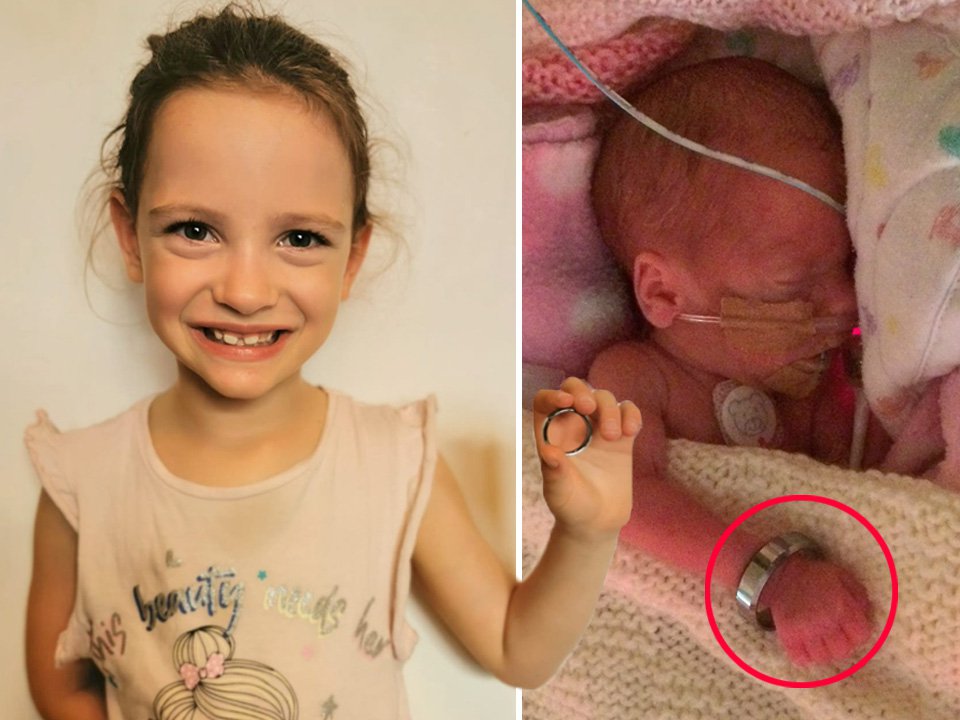 When Poppy Cooke was born she weighed just 1lb and her skin was so fragile her parents weren’t even allowed to give her a cuddle.

Six years on, life is very different for the little girl who arrived 19 weeks early in November 2014 and spent 107 days in three hospitals before she could come home to parents Lucy and Matt.

Weighing just 1lb 3oz when she was born, having spent just 25 weeks in the womb, Poppy wore her dad’s wedding ring as a bracelet – but now her parents are delighted because she can slip it on her finger.

Despite facing a cyst on her brain, a hole in her heart, five blood transfusions, lung disease and numerous setbacks, Poppy is now doing brilliantly.

‘Poppy was so tiny when we she was born,’ says mum Lucy.

‘We could hardly touch her in case we broke her skin as it was paper thin. Seeing my husband’s ring on her wrist was crazy. It showed just how little she was.

‘Now she can put it on her finger and thumb. She’s just incredible and amazes me every day.’

Lucy, now 33, was taken into Worthing Hospital in West Sussex at 25 weeks pregnant when her high blood pressure went through the roof, and she started getting pains in her stomach.

She was diagnosed with pre-eclampsia – a condition that causes high blood pressure during pregnancy – and HELLP syndrome – a rare liver and blood clotting disorder.

‘I was told that my baby would be coming on the weekend,’ Lucy says. ‘I had no idea it would happen so fast – we hadn’t even decided on a name as we’d only just found out the gender.’

Lucy was taken to Princess Anne Hospital, Southampton, when she went in to labour as her local hospital was not equipped to look after such a premature baby.

On November 22, 2014, Lucy had an emergency c-section to deliver her little one and hardly saw her before she was whisked away to the NICU.

‘I didn’t get to see Poppy for 10 hours,’ Lucy says. ‘She was all hooked up to loads of wires and so tiny.

‘We didn’t even get to cuddle her until she was 10 days old as her skin was too fragile.

‘We couldn’t stroke her in case that broke her skin.’

Poppy was born with a hole in her heart and suffered a cyst on her brain at two weeks old.

She was in hospital for three weeks before she was transferred to Royal Sussex County Hospital in Brighton so she could be closer to home.

She had five blood transfusions and was then taken to Worthing Hospital to gain strength before she could come home.

Poppy finally came home on 7 March, 2015 – five days after her original due date.

Poppy has gone from strength to strength ever since and reaching milestones just like any other girl her age.

‘She is a fountain of knowledge,’ Lucy adds. ‘She’s so good at maths.

‘It feels out of this world for us that she is doing so well. She’s very happy and jokey and loves playing with her Barbies. She is a dream.’

Poppy said: ‘I can’t believe that I was so small as a baby and now I am so tall.’