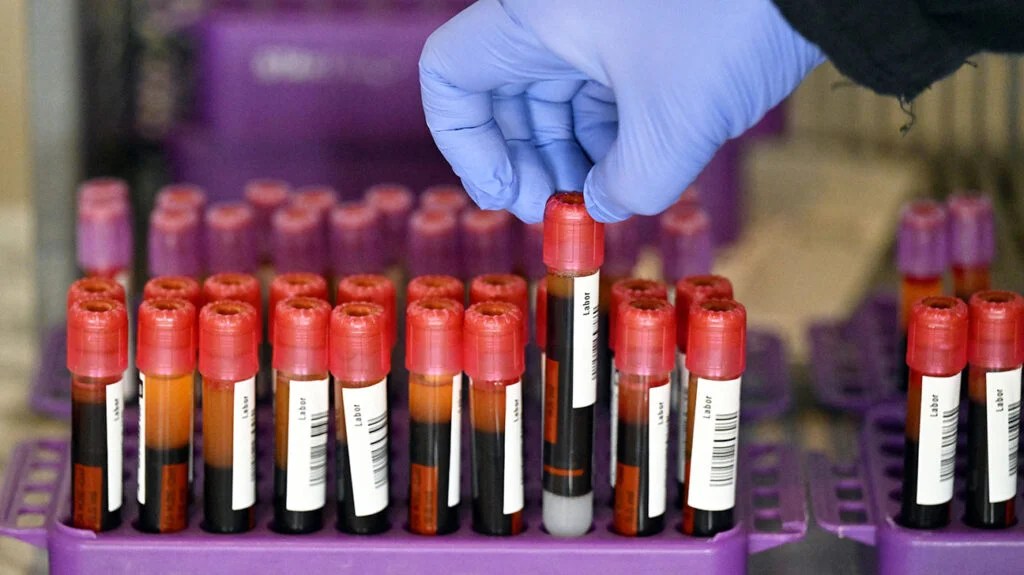 About every 3.2 seconds, somewhere around the world, someone receives a diagnosis of Alzheimer’s disease — a currently incurable type of dementia causing cognitive issues and memory loss.

Past research shows when a person receives an early diagnosis of Alzheimer’s, their treatment options can be greater. Experts estimate 28 million of the 36 million people worldwide with dementia have yet to receive a diagnosis.

In a new effort to provide earlier detection of Alzheimer’s disease, researchers from the University of Washington have developed a laboratory test that measures the levels of amyloid beta oligomers in the blood. Not only did the test detect oligomers in the blood of people with mild cognitive impairment (MCI) and moderate to severe Alzheimer’s, but it also picked up the presence of oligomers in people in the control group who later developed MCI.

The study’s findings appear in the journal Proceedings of the National Academy of Sciences.

What are amyloid beta oligomers?

Over the past few years, scientists conducted much research on the presence of amyloid beta proteins in people with Alzheimer’s disease.

Amyloid beta proteins naturally occur throughout many cells in the body. These proteins normally play a large part in the growth and repair of neurons.

However, sometimes amyloid beta proteins can become corrupted and start to clump together in the brain. At this early stage, these small clumps are called oligomers. Over time, if they continue to clump together, they form larger clumps called amyloid plaques.

Some previous research shows a correlation between amyloid plaques and Alzheimer’s disease. However, additional research emerged and presented conflicting findings against the amyloid plaque theory.

“It’s estimated that damage is being done to the brain for 10-20 years before the advent of symptoms,” stated Dr. Valerie Daggett, professor of bioengineering and faculty member in the Molecular Engineering & Sciences Institute at the University of Washington and senior author of this study.

“To be able to truly modify the course of the disease we need to intervene early when the toxic oligomers first begin attacking neurons, otherwise it’s like trying to treat stage 4 cancer.

Earlier is always better, but first, we need a blood-based diagnostic test that can detect the disease earlier and reliably at all stages.”

Dr. Daggett and her team used the new SOBA test on blood samples from 310 people already participating in Alzheimer’s research. When collecting blood samples, researchers classified participants as having no signs of cognitive impairment, MCI, Alzheimer’s disease, or another form of dementia.

The SOBA test found oligomers in the blood samples of people with MCI and moderate to severe Alzheimer’s disease. In 53 cases, an autopsy after death verified the Alzheimer’s diagnosis. And in 52 of those cases, toxic oligomers were found in their blood.

Additionally, the SOBA test detected oligomers in 11 people from the study’s control group. Upon studying the follow-up examination records, researchers found 10 of those people received diagnoses later in the life of either MCI or brain pathology consistent with Alzheimer’s disease.

“Based on the science, given what is known in the field about the order of events in the molecular biochemistry/pathology, we expect the amyloid beta toxic oligomers to be one of the earliest triggers of the disease, prior to fibril and plaque formation and tau hyperphosphorylation, for example,” Dr. Daggett said.

“[We] were hoping that our assay would detect toxic oligomers in presymptomatic individuals, but nonetheless we were surprised — and pleased — when it worked,” she added.

How quickly might the SOBA laboratory test be available for doctors and patients to use?

Dr. Daggett reported the SOBA-AD version of the assay had been granted Breakthrough Device Status from the FDA, and AltPrep is pursuing commercialization. However, they do not yet have a firm timeline.

“At AltPep we are working on our Alzheimer’s disease therapeutic, which is designed to bind the toxic oligomers, neutralize them, and stimulate their clearance,” she added. “In addition, we plan to pursue Breakthrough Status for our Parkinson’s disease/Lewy body dementia test in plasma.”

“At the University of Washington, my lab is funded by the National Institute of Aging and we are doing basic research to characterize and understand the role of toxic oligomers,” Dr. Daggett continued. “In addition, we work on a number of unrelated amyloid diseases, which is what allowed us to first discover the alpha-sheet structure targeted by SOBA and formed by unrelated amyloid disease-associated peptides and proteins.”

He stated this is important work in providing new options for early diagnosis and detecting Alzheimer’s disease before symptoms begin.

“When patients haven’t yet started to have memory loss, that’s the best point in time to intervene to prevent memory loss from occurring,” Dr. Merrill explained. “With a typical clinical diagnosis of Alzheimer’s disease, once somebody’s already symptomatic it may be too late to prevent significantly impairing memory loss. Studies in years past have shown with a clinical diagnosis of Alzheimer’s, up to 90% of the memory cells in the brain have already died.”

For the next steps in this research, he said he would like to see further validation of the test on a larger sample across all stages of the disease, from pre-symptomatic to mild cognitive impairment to more severe forms of the disorder that are already developed.

“It’s been controversial that amyloid might be a bystander in Alzheimer’s — it may not be the root cause of the memory loss or the death of brain cells,” he added. “So whether or not you remove the oligomers or the amyloid, it’s still a question of whether or not that will prevent memory loss or improve memory loss in those who have developed it, so it’s a really challenging disease.”