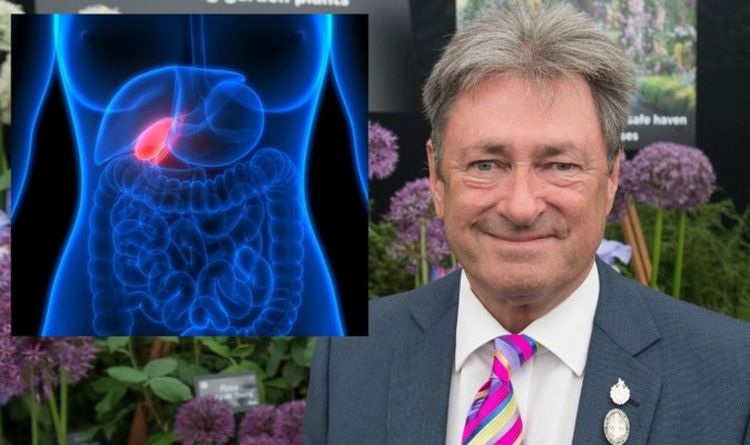 Alongside more typical gardening injuries such as backache, blackened fingernails and scratches from one too many run-ins with a rose bush, Alan has faced some more serious injuries and health concerns. And at the age of 72, the older the presenter gets the more worrying his health becomes.

Talking about one incident in his Gardener’s World column which he named as the “tree-staking episode” he said: “I was inserting a stout wooden stake into a prepared hole for a standard tree and holding the sledge hammer at the top of the handle right against the post.

“My hand slipped and the full weight of the hammer came down, sandwiching my middle finger between post and shaft. The air was blue.

“The finger was blue. Squashed, but not broken.

In a more dramatic event, Alan was rushed to hospital via air ambulance and taken straight into surgery after suffering severe chest pains.

A history of heart disease runs in Alan’s family after his father suddenly died aged just 62. “The thing is, the men in my family have had a tendency to die from heart disease at a relatively young age,” Alan said.

Aware of the dangers of this Alan was forced to think more carefully about his health and looking after himself.

But despite taking precautionary measures in the form of statins to help lower his cholesterol levels he started to experience symptoms that resembled indigestion.

Talking about the time to The Sunday Post he said: “At first, I thought it was indigestion as I know that can give you chest pains — but it didn’t wear off.

“I didn’t know what was wrong and although I didn’t think it was a heart attack, because the pain wasn’t going down my arm, it was frightening.”

“I hoped I wasn’t going to die, and I was hanging on in there, but the pain was so acute at one point I thought it might be a blessed relief.”

Continuing to describe the pain he revealed that he was in “absolute agony” and that it was “every bit as agonising as a heart attack.”

After his wife Alison called the emergency services the star was taken for immediate treatment on the Isle of Wight and subsequently airlifted to Portsmouth’s Queen Alexandra Hospital.

After surgery the presenter was relieved to find out that what he was suffering with was not a heart attack but in fact gallstones.

Gallstones are small stones usually made up of cholesterol that form in the gallbladder and usually they have no symptoms.

What Alan experienced was in fact a trapped gallstone in the opening of a duct inside the gallbladder which in turn caused intense pain.

The gallbladder is a small pouch-like organ found underneath the liver. Its main purpose is to store and concentrate bile. Bile is a liquid produced by the liver to help digest fats. It’s passed from the liver into the gallbladder through a series of channels known as bile ducts.

Medical News Today also revealed that along with pain in the chest or upper-mid section of the abdomen, individuals can also experience nausea, fever, changes in bowel movements, changes in urine and jaundice because of gallstones.

In order to ease symptoms emergency keyhole surgery to remove the gallbladder is often carried out.

If not treated then complications such as acute pancreatitis may develop which can then lead to infection and sepsis.

It’s possible to lead a normal life without a gallbladder. Your liver will still produce bile to digest food, but the bile will drip continuously into the small intestine, rather than build up in the gallbladder.