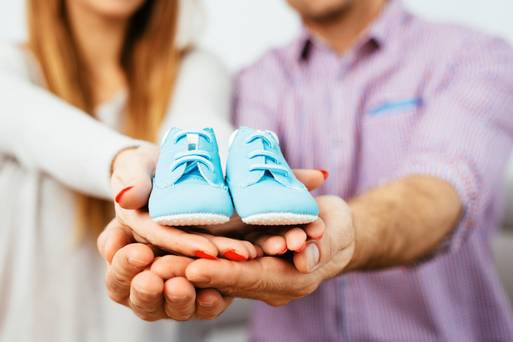 For every woman who wants to shout her baby news from the rooftops, there’s a woman who wants to keep it to herself until she gets used to the idea. While some women opt to tell their friends through social media on their WhatsApp groups, others prefer to tell close friends one-to-one. And when it comes to sharing your news with your boss and colleagues, mums-to-be can often wonder how best to let those in their workplace know.

If you go online, there are a myriad of novel ways in which women are announcing their precious baby news today. Some show pictures of a couple holding their hospital scan pictures, others show two sets of shoes with a baby pair in the middle indicating a new person is coming into the family. Some post cute snaps of their older child or children holding a babygro with their baby’s due date on it.

According to Krysia Lynch, spokeswoman for the Association for Improvements in Maternity Services in Ireland, social media has changed so much, including the way women opt to tell people their baby news. She says it’s a far cry from years ago when you only knew a woman was pregnant when you met her and saw her baby bump.

She says social media means that baby news is one of many things shared by expectant parents nowadays but it’s a purely personal decision when and how a woman likes to let people know.

While there are no hard and fast rules or etiquette around this, with a bit of thought – particularly when it comes to the workplace – communicating your news will be a straightforward and positive step.

According to Claire Flannery, a mum of two who’s expecting her third baby in June, some women do feel nervous about telling their boss or line manager in work.

In her business, Strength Within, Claire works as a maternity coach helping women prepare to step away from work for a period and helps them to make the transition back to work after a baby more easily.

Claire, who lives in Dublin, explains that legally women are only required to give their employer four weeks notice in writing but in practice most women prefer to give much more.

She says the majority of women tell their employer their baby news after the 12-week mark but if they’ve been very sick or nauseous she says they may prefer to tell their boss early so they know what’s going on.

“It’s best to do it whenever you’re ready but I think it’s better to tell your boss before you announce it on social media. You don’t want to end up in an awkward situation. You want to be yourself and if you leave it later you may feel like you’re hiding it. You also want to give yourself enough time in terms of planning the break away from work,” says Claire, who is mum to Seamus (4) and Vaughan (2).

“When women announce it earlier, they feel like they have more control about how it’s all going to be worked out. You could start with your line manager and agree with them how you will communicate it to others,” she says.

Claire points out that the main thing is to feel ready and says while pregnancy-related discrimination in the workplace is still a factor, workplaces are much more sensitive to the needs of pregnant workers today.

Through her work she also holds workshops for line managers around how to manage this maternity transition period in the workplace. When a woman tells her line manager she’s expecting, Claire says her advice to them is to say congratulations, ask her how she’s feeling and say nothing else.

“Some managers feel like they don’t know what to say so they may make a joke. I do think things are getting better but I do see managers trying to accommodate people in a way that may not be in the woman’s best interest. People make assumptions about what people need and often it’s the lack of communication that causes the problems,” she says.

HR expert Aine Crilly who works in Newry, Co Down, says women announcing their pregnancies in work want to feel valued, enabled and accommodated and says most employers really want to get things right.

She says there’s no legal obligations on a woman to tell her employer early but most women like to make sure they inform their employer before the end of the 15th week. “Sometimes a woman can feel vulnerable. She can wonder if she’ll be looked less favourably upon or even if her job will be there when she comes back. Communication is key at the start, during and after maternity,” says Aine.

Telling your employer and work colleagues is one thing, telling family and friends is another, and there’s no one size fits all rule.

While many women choose not to tell anyone until they’re out of the first trimester when the risk of miscarriage reduces, others want to share their news with loved ones straight away.

Many choose to tell loved ones in person so they can see their reactions first-hand but in an age of social media, many are opting for scan photographs on Facebook and Instagram to do the talking for them.

Kate, a mother of two from Dublin, says her approach was to not tell the world until she was 12 weeks pregnant but her close family including her sisters knew much earlier.

“I suppose my thinking is that I’d tell the people I’d want to know if I lost the baby. I would have told the people who I’d want to support me if something went wrong,” says Kate.

While her first pregnancy resulted in the birth of her daughter, her second pregnancy ended in miscarriage. Kate went on to have a second child quite quickly after her miscarriage but the experience meant she didn’t feel the same eagerness to announce her third pregnancy to the world at large.

“I didn’t feel the need to tell the world. I sat on that pregnancy quite happily till after 12 weeks. I think when you’re pregnant with your first baby, your entire life is about to change. You are becoming a completely new person – you’re becoming a mother. Your second child is a more private thing – you’re increasing your family and you’re giving your child a sibling,” she says.

“Even though you’re not responsible for their pain, you don’t want to rub their faces in it. I called my friend and said: ‘I know this is going to be hard for you and I’m sorry it’s not the two of us going through pregnancy together’.”

Kate says from her perspective it’s good to keep in mind that other people around you may be struggling to conceive or could be going through fertility treatment or even going through a miscarriage. While she says it’s important to enjoy your baby news, it’s also a good idea to be conscious of others.

Avril White, a Dublin-based mum of two girls, Eva (6) and Olivia (3), says that with the nature of social media, women naturally want to share their exciting pregnancy news publicly.

Avril, who set up the online information hub Dublin City Mum last year, says her own struggles with infertility made her very aware of just how common it is for women to have difficulties conceiving. She says women should be free to share their pregnancy news in whatever capacity they choose and be happy to do so. However she says sometimes, without them realising it, this may have a negative impact on women who are struggling to conceive or who have suffered any kind of pregnancy loss.

“I think naturally it is hard for people going through any kind of fertility issues to see public announcements. Of course everyone has a right to express their feelings however they choose, it’s just important to be mindful of all those women who are having a tough time conceiving,” says Avril.

“When I got pregnant with my girls , I was quite private with sharing my pregnancies. Mainly because I was anxious about the outcome. Having experienced pregnancy loss made me very aware of how precious pregnancies are and for those going through the same it can be a really tough,” she says.

Just the job: How to make the announcement at work

● Your boss should hear it from you first

While you may be itching to share your baby news, it may be better to tell your boss before sharing it on social media. With so many of us connected and socialising together outside of work, it’s better to keep your big news off social media until you’ve told your boss.

You may want to wait until after your 12-week scan or you may want to let your boss know that you are suffering from nausea or morning sickness – it’s up to you when and how you want to deliver your news.

● Enquire about your entitlements

Make sure you know your maternity benefit entitlements. If your workplace has a maternity leave policy, find out about it through HR. According to the Small Firms Association’s Helen Quinn, women can feel really secure that they are well protected in the workplace when they announce their pregnancy.

For more information, the Workplace Relations Commission has produced a plain English guide to the Maternity Protection Acts, which is available on its website at workplacerelations.ie