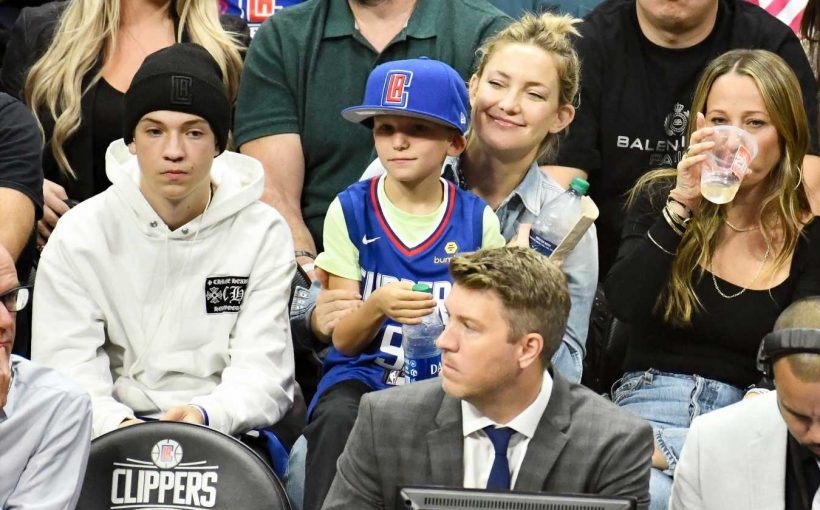 Kate Hudson‘s family is taking in some basketball.

On Tuesday, the actress, 40, and her sons, 15-year-old Ryder Russell and 8-year-old Bingham Hawn, watched the Los Angeles Lakers play local rivals the Los Angeles Clippers during a game at the Staples Center. The trio, who sat courtside, was also joined by Hudson’s boyfriend, Danny Fujikawa.

For the outing, Hudson wore a denim shirt and jeans, while her youngest son rocked a Clippers jersey and hat. Ryder wore a black Clippers hat and a white sweatshirt.

Based on their apparel choices, the family cheered on the winning team, as the Clippers went on to defeat the Lakers 112-102.

Want all the latest pregnancy and birth announcements, plus more celebrity parenting news? Click here to get those and more in the PEOPLE Parents newsletter.

On her Instagram Story, the mom of three shared a hilarious clip of the family driving to the game, where Fujikawa and Ryder played around with fake Irish and British accents.

The actress also tried to take a selfie video with son Ryder at the game, before he jokingly told her “Stop!” and she smiled and moved the camera away.

Not in attendance at the basketball game was Hudson’s youngest child, daughter Rani Rose, who turned 1 year old on October 2.

Earlier this month, Hudson shared an adorable video of Rani walking towards her, taking her first steps on camera.

“Come to Mama, come to mama,” Hudson can be heard saying in the clip as she holds the camera. Rani is chatty as she coos while taking some steps towards her mom. “Good girl!” Hudson exclaims when Rani makes it to her.

Hudson shares Rani with boyfriend Fujikawa, 33, whom she’s been dating since December 2016. Meanwhile, she shares Ryder and Bingham with Chris Robinson and Matt Bellamy, respectively.

Rani is Hudson’s third child, but her only girl, and it seems like Hudson is enjoying the newfound girl time. In August, the star shared a happy snap of herself and Rani wearing matching sundresses, captioning the post with a simple sunflower emoji.

In the photos, Hudson wears a white minidress with brown embroidery, oversized sunglasses and her blonde locks pulled back in a bun.

She accessorized the ensemble with long gold necklaces and dangly earrings. The How to Lose a Guy in 10 Days actress holds her little tot, who gives a big smile for the camera and holds a stuffed bunny rabbit in her hand.