Home » Family Health » Chore wars: is the division of housework putting a strain on your relationship? 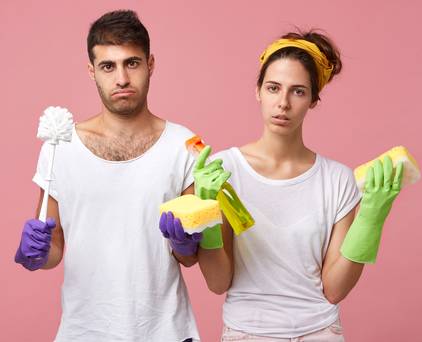 Remember that time Theresa May went on The One Show and described how in her household there were, “boys’ jobs and girls’ jobs”? I was so cross at the gender stereotyping I did a massive ‘tut’, loud enough to be heard by my husband, who was heaving bin bags out of the front door.

I realised I hadn’t taken out the rubbish in a decade, or done anything requiring a ladder. I do the laundry, cooking and tidying; he does the shopping and keep-this-show-on-the-road tasks, such as fixing computers and phones – anything that arrived in the house this century – while it’s me who spends Sunday afternoon wax-polishing a Georgian table.

Even today – girls’ jobs, boys’ jobs, any jobs – it’s the women in relationships who do most housework, about 16 hours a week compared to men’s six.

A University College London study of 8,500 heterosexual couples showed that even when both partners work full-time, fewer than 7pc share housework equally. Interestingly, same-sex couples are much better at dividing jobs fairly – until children arrive, that is, when the lowest-earning partner shoulders most of the domestic responsibility.

Spare me the cop-out about women being better at multitasking. We aren’t. We just feel more pressure to do everything at once. In her excellent book, Unf**k Your Habitat: You’re Better Than Your Mess, Rachel Hoffman makes the good point that women are often inclined to make allowances for men, and we need to stop.

She is right. Each person in a household should shoulder their responsibility, but it’s my women friends who feel the heaviest domestic burden because we are schooled, socialised, to view our homes as an extension of ourselves in a way men usually aren’t.

We are more likely to feel embarrassment, even shame, if our living conditions are less than perfect. We need to give ourselves – and probably our partners – a break.

In her book, Drop the Ball: Achieving More by Doing Less, Tiffany Dufu writes: “We [women] obsess about things that honestly aren’t important… because you’ve been socialised to attach your value to those things. A well-managed home is still a gendered expectation, which is why it’s so very difficult for men to get home control disease – they just don’t attach it to their value.” And this is from a woman who once insisted all her hangers faced the same way and made a sticker reward system for her husband…

Cleaning guru Aggie MacKenzie (aggiestips.com) is perhaps more forgiving than you might expect: “You need to start by comm­unicating with each other, rather than hoping the problem will go away. It won’t. And appreciate the other person, instead of getting really angry about their shortcomings.

“You have to state your needs instead of thinking, ‘If I go and clean the house maybe he’ll take the hint.’ No, no, no! Divide up the tasks, swap them around every couple of months, and appreciate the other person’s strengths.”

Of course, all this is easy if you have similar expectations, but that is almost never the case. Nathan Gould, a psychotherapist and couples counsellor, says: “We seldom have an open discussion about who is going to do what. We come into relationships with expectations based on our own family models and just expect it to work.

“It doesn’t have to be 50-50, it’s whatever works for your family, but it’s important the other person feels ­appreciated. Talk about your feelings rather than apportioning blame.”

Aggie agrees. “You have to tackle things early on, otherwise you end up being absolutely bloody furious. And keep your sense of humour.

“And while the state of your home is important, it’s not the most important thing in the world.”

If you are the perfectionist in your relationship (and I come in peace, as a reformed Alpha Cleaner) perhaps it is time to do less of the leaning in and more of the giving in? Live more, clean less, and don’t let a few fingerprints on the fridge or smudges on the mirror get in the way of enjoying your life.