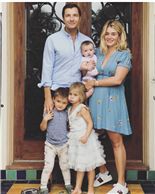 Daphne Oz is now a mom of four!

The Dish on Oz co-host, 33, and husband John Jovanovic have welcomed their fourth child, a daughter, her rep confirms to PEOPLE exclusively.

In early August, the new MasterChef Junior judge told PEOPLE that this has been her “hardest pregnancy physically,” but that “trying to feel good in my skin, whether it’s finding little ways to take care of myself or finding clothes that fit in a way that makes me feel good, has made a big difference.”

“It’s physically daunting,” Oz added. “I’ve been pregnant four times in five years now. On the one hand, your body is so resilient, it’s truly incredible what the human body is capable of. But on the other, it’s like, ‘Whoa, can you give me a break for a second?’ “

During this pregnancy, the TV host joined the judges’ panel on MasterChef Junior alongside Aarón Sanchez and Gordon Ramsay, who welcomed son Oscar James earlier this year.

“Hats off to him. I feel like he is juggling so much all the time and I have so much to learn in that regard,” she says of her co-judge. “We also really see eye to eye in figuring out how to raise happy, confident kids with passions of their own with really nurturing parents, who at the same time, let them live their lives.”

In late March, Oz revealed exclusively to PEOPLE that she was expecting a daughter, sharing photos of the inside of a sex-reveal lasagna she cut into alongside her dad, Dr. Mehmet Oz, which contained pink-dyed cheese.

“I’m super pumped about this because I have done gender reveals a number of ways,” she said in a teaser clip from The Dish on Oz, where the big announcement went down courtesy of the dish by Villa Italian Kitchen.

“I have never yet seen a gender reveal done this way, for myself,” she continued. “But this is kind of a big deal — they put this ridiculous cheesy twist on lasagna.”

Added the Mom Brain podcast co-host, “So inside this lasagna … is either blue or pink cheesy layers. That’s how you figure out what you’re having.”

Oz’s rep confirmed her baby news exclusively to PEOPLE on March 19, revealing that she and husband Jovanovic were expecting their fourth child later this year.

In a PEOPLE-exclusive sneak peek of The Dish on Oz’s March 20 episode, Oz — alongside her father — announced her baby on the way to the audience and show’s co-hosts.

The mom-to-be also revealed the exciting news in an Instagram post, where she sweetly displayed the side profile of her baby bump in a patterned green dress.

“I do love to cook! bun in the oven #4 coming your way later this year and we couldn’t be more excited!! ❤️❤️❤️❤️” she captioned the shot.

Last summer, Oz opened up about her desire for more children in the future. For MINI magazine’s summer 2018 cover story, the cookbook author posed with her kids and revealed that she was “for sure” open to having more.

Still, the former co-host of The Chew was living in the moment and wasn’t necessarily in a hurry to expand her family.

“I love it,” Oz said of motherhood. “I think that there’s a part of me that worries that I will just miss any version [of my children]. These kids are all so different. They come out with these little personalities totally intact, and there are all these iterations of what you can create, so I want to see some more versions.”

“The best parts and the worst parts, the highs and the lows, they both go so fast,” she told PEOPLE. “You just have to relish every part of it.”