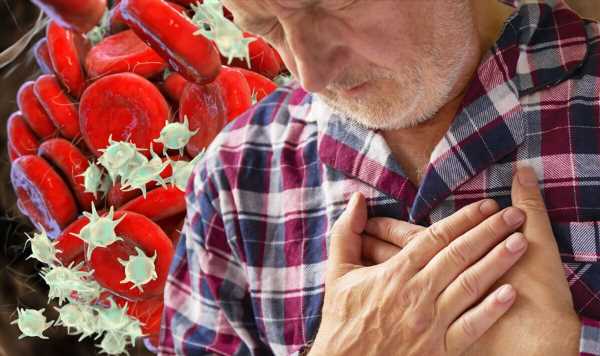 Statins: How the drug prevents heart attacks and strokes

There is mounting evidence that misalignment of the body’s internal clock can hinder cardiovascular health. Heart attacks, for instance, are thought to be deadlier in the morning due to chemical imbalances in the body. These shifts may interfere with the body’s natural defences against deadly blood clots, research suggests. Two mistakes, however, could raise the risk of having a heart attack further.

In one study by the Harvard Medical School, researchers found that heart attacks that struck in the morning hours are associated with 20 percent more dead heart tissue.

The findings of the 2011 study, published in the journal Heart, suggest that heart attacks that occurred between the hours of six am to noon are the deadliest.

The lead author of the studies, Borja Ibanez, noted that the association was “quite robust”.

He added: “In our study, events that took place in the morning were associated with more damage.”

The Harvard Medical School study was among the first to draw a strong link between the circadian rhythm and the risk of a heart attack, but many further studies echoed these findings.

In 2020, a study published in Trend in Endocrinology and Metabolism, suggests that misalignment in the circadian system caused by modern lifestyle adversely impacted cardiovascular function.

It is believed that during the early hours of the day, the circadian system sends out a higher amount of PAI-1 cells, which prevent the breakdown of blood clots.

The higher the level of PAI-1 cells in the blood, the greater the risk of a blood clot forming that could lead to a heart attack.

The Harvard Medical School study established that patients who had heart attacks between six am and noon had higher levels of PAI-1 cells, compared to patients who had a cardiac attack later in the day.

Professor Srinath Reddy, cardiologist, epidemiologist and president of the Public Health Foundation of India, warned that certain habits could exacerbate this risk.

He explained: “Usually there is an early morning surge of blood pressure, which is part of our evolutionary biology.

“Blood clotting tendency, too, is higher at that time.

“If a person who has some underlying coronary risk factors, has not slept well, is dehydrated and steps up to do exercise, plaque instability can lead to rupture and trigger large clot formation.”

Two ways to counter the risk of an early morning heart attack are therefore getting a good night’s sleep and delaying a morning workout.

The Centers for Disease Control and Prevention explains that adults who sleep less than seven hours every night have a higher risk of health problems relating to the heart.

But emphasis should be placed on both the quality and duration of sleep.

This is because both insufficient and fragmented sleep can contribute to issues with blood pressure; a well-known precursor for major cardiac events.

Those with a flexible work schedule are also advised to work out later in the day, or start off their morning work out slowly and build up the intensity.

High-intensity exercise can acutely set off the risk for sudden cardiac arrests or death, by compromising circulation.

This should not deter a person from exercising, however, as exercise is still one of the best prescriptions for good cardiovascular health.