Home » Health News » Revealed: Other illnesses increasing in prevalence because of lockdown 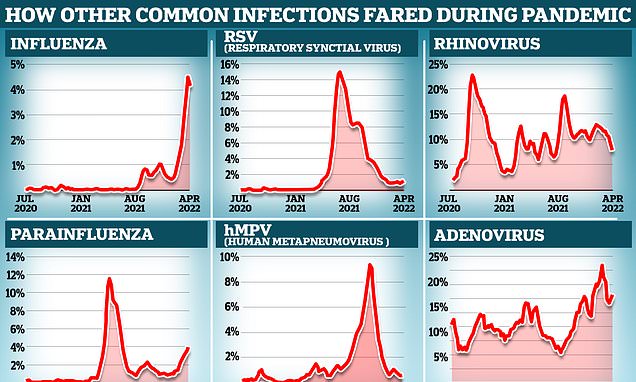 Revealed: The other common bugs that have made post-lockdown comebacks… and why they may feel ‘nastier than usual’ if you get ill

Rates of some respiratory illnesses in England are up to four times higher now than they were a year ago and 20 times greater than after 2020’s first shutdown. Other viruses surged last summer, immediately after the strictest restrictions were axed.

Scientists had warned the viruses were bound to make a comeback after face masks, social distancing and other pandemic curbs were dropped.

But there is heightened concern our bodies are less well-equipped to fight off the infections after two years with little exposure to them — even if they are still less prevalent than before the pandemic.

Infectious disease expert Professor Paul Hunter told MailOnline: ‘We’re concerned that if you are not exposed to a particular virus for a long time, then it may be more severe when you’re re-exposed.

‘But what form that severe disease will take is anybody’s guess. It’s something that is worrying and we potentially will have to deal with for some time.’

Professor Hunter, from the University of East Anglia, said viruses that are traditionally mild may cause ‘nastier than usual’ colds in the coming months or years.

The fears come after health officials linked a mysterious outbreak of hepatitis in young children to adenoviruses, which usually cause the sniffles or an upset stomach.

Their working hypothesis is that a lack of exposure during the pandemic has left many with subpar immunity, and vulnerable to the deadly liver disease. Circulation rates of the virus among youngsters are higher than in previous years.

MailOnline has analysed UK Health Security Agency (UKHSA) data on the percentage of people testing positive for flu, rhinovirus, parainfluenza, RSV, hMPV and adenovirus in England during the pandemic. 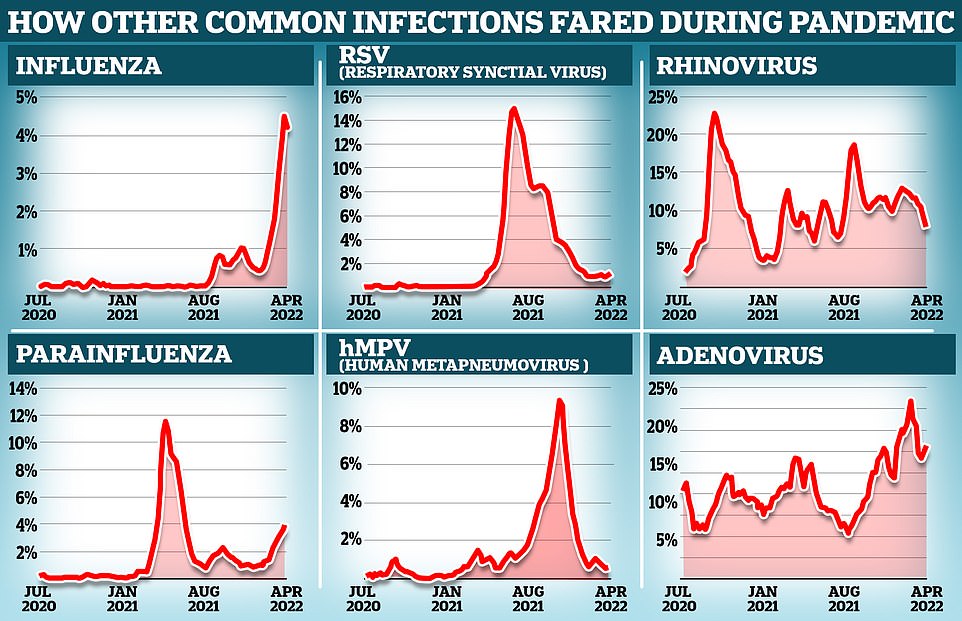 MailOnline has analysed the percentage of people testing positive for flu, rhinovirus, parainfluenza, RSV, hMPV and adenovirus in England during the pandemic. Rates for all of the viruses except rhinovirus are higher now than this time a year ago, when people were only allowed to meet in groups of six, working from home was in place and hugging was still discouraged 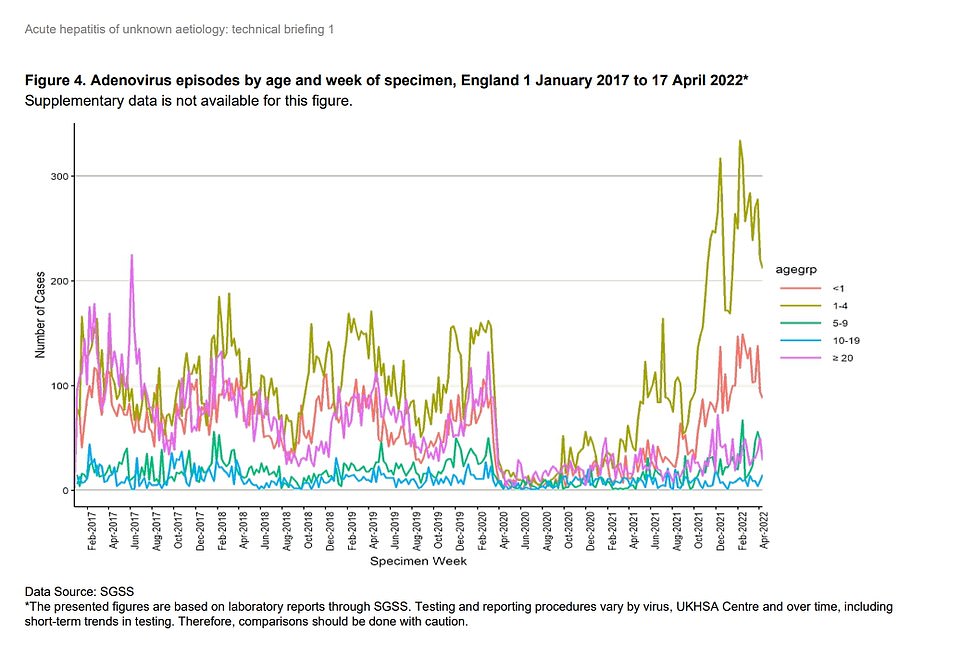 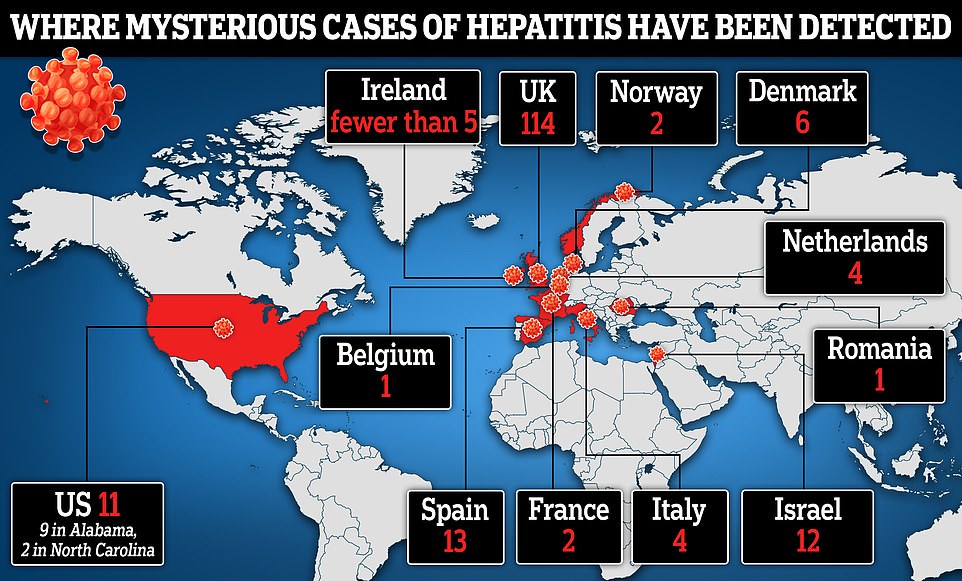 Rates of most of the common viruses began to resurge last autumn and winter, when most Covid measures were removed. Some — including RSV and parainfluenza — soared last summer.

The figures come from the UKHSA’s weekly National Flu and Covid Surveillance Report, based on around 70,000 weekly tests.

Analysis shows six common viruses — which usually flare-up in the winter — are more prevalent now than in July 2020, the earliest date for that year with data, when there were virtually no cases.

A three-year-old girl struck down with the mysterious hepatitis sweeping the world has been spared death — after receiving part of her father’s liver.

Lola-Rose Raine, from Gravesend, Kent, is one of nearly 170 children to fall ill with the liver disease that has perplexed experts in recent months.

After initially writing her vomiting off as just a tummy bug, Lola-Rose’s parents grew concerned when her eyes developed a yellow tinge — a hallmark sign of hepatitis.

Hospital scans revealed that her liver was not working normally and she was taken to a specialist unit at Kings College Hospital in London in March.

But days after arriving her liver began to fail, with medics forced to put her in a coma and remove the diseased organ, giving her just hours to live without a new one.

Her father Alan Raine, 27, who works in security, told MailOnline it was like ‘literally watching our little girl die before our eyes’ as he waited to hear if his organ would be a match.

He donated part of his liver to save his dying daughter on March 30 in an operation that lasted seven hours.

Despite being told of the risks, Mr Raine said it was a choice between donating his liver or having his heart ‘torn out’ watching his child suffer.

Almost a month after the surgery, Lola-Rose has made a full recovery and will be discharged from hospital this week.

Some 7.9 per cent of results came back for rhinovirus in the most recent week, six times higher than the 1.7 per cent in July 2020.

Positivity rates for parainfluenza viruses, which usually cause colds and bronchitis, stood at just 0.2 per cent in July 2020, compared to 3.9 per cent now.

Adenovirus rates are also higher, with 3.1 per cent of tests positive for the viruses, up from 2.1 per cent.

Smaller rises have been seen in cases of respiratory syncytial virus (RSV) and human metapneumovirus (hMPV).

Rates for all of the viruses except rhinovirus are higher now than this time a year ago, when people were only allowed to meet in groups of six, working from home was in place and hugging was still discouraged.

Professor Hunter said the big unknown was whether immunity to these viruses gained before 2020 will still hold up.

‘It depends on how long protection against severe disease [against common viruses] lasts — if it lasts five to 10 years then fine but if it only lasts two to three years then we could be in trouble.

‘We just don’t know, and the fact that protection against severe Covid wanes within months may be a cause for concern for other viruses.’

Asked whether there was a risk of spikes in severe symptoms, he MailOnline: ‘I think that’s certainly a possibility yes — and that risk will persist for a while.

‘We’re not seeing these viruses at pre-pandemic levels and it could be a few years before we do.

‘I remain worried about flu, when it comes back with a vengeance it is likely to be nastier than usual.’

Despite the rises, the seasonal viruses are expected to come down now we move into the summer months, as is already happening with flu and rhinovirus.

And cases are still far lower than pre-pandemic levels, with the ultra-infectious Omicron Covid variant outcompeting all other infections. Cases of adenovirus and parainfluenza still appear to be climbing, however.

The outbreak of mysterious hepatitis has raised fears that lockdown may have significantly weakened immunity to traditionally mild viruses.

Professor Hunter said: ‘This thing [hepatitis outbreak] really took me by surprise. But I’ve been saying since last summer than lifting remaining restrictions was wise because we risked losing protection against common illnesses.’

So far 169 cases of ‘acute hepatitis of unknown origin’ have been detected in 12 countries since last October, the World Health Organization (WHO) has announced.

The vast majority of cases have been among children aged five and under, and so far one youngster has died and 17 have needed critical liver transplants.

Three-quarters of cases in the UK have been linked to adenoviruses, which usually cause the common cold. 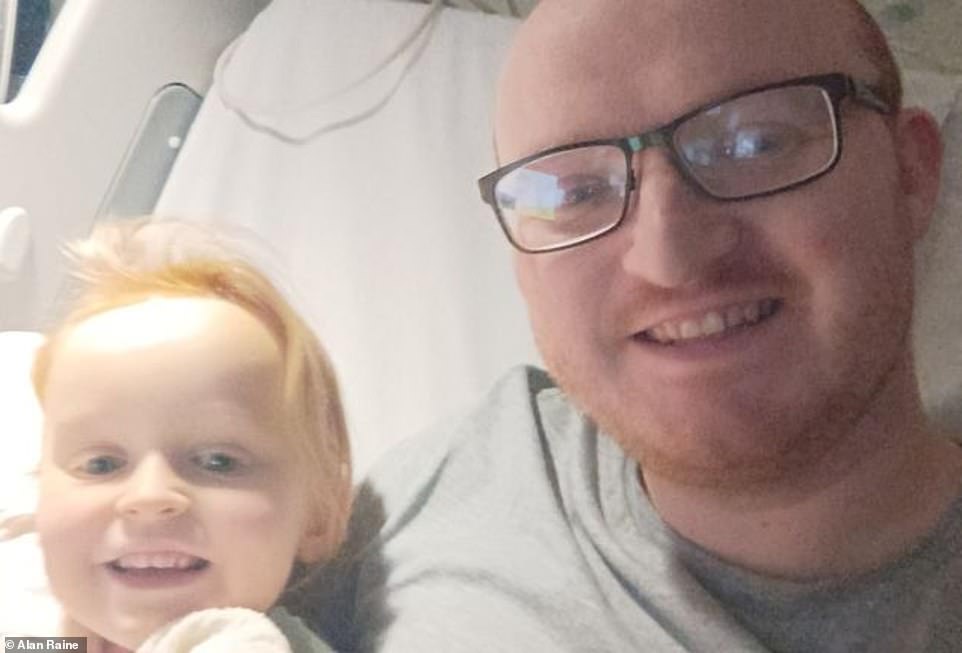 Alan Raine, from Gravesend, Kent, was told he could donate part of his organ to save his daughter Lola-Rose just hours before doctors feared she would die because of the inflammatory liver condition 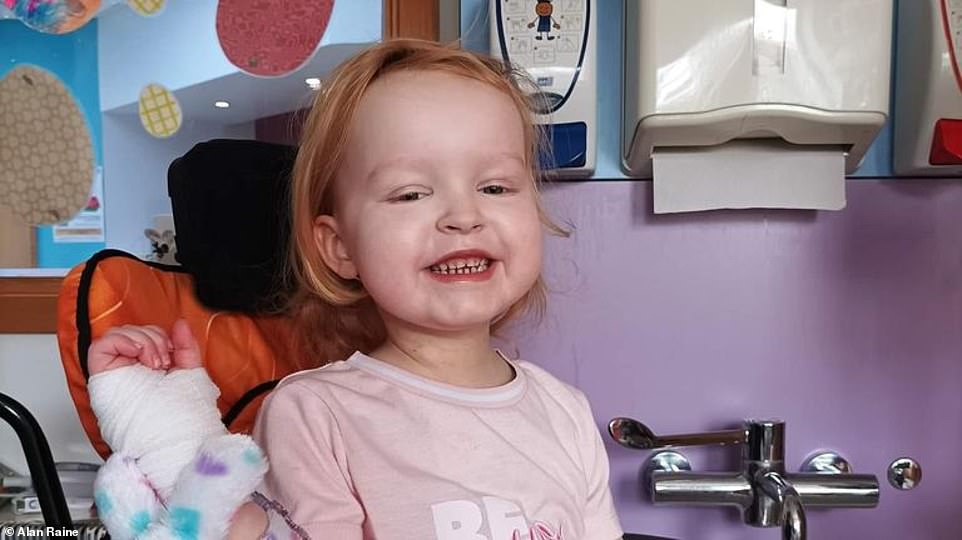 Now, four weeks after her surgery, Lola-Rose is back to being herself, singing Frozen songs at three in the morning ‘for all the ward to hear’, Mr Raine said

However, if someone’s immune system is unable to fight off the virus, it can develop into hepatitis.

There are also fears that a strain of adenovirus may have mutated to become more severe.

Many experts warned during the pandemic that locking down children, despite their low risk of severe Covid, could weaken their immunity against other illnesses, as well as hamper their education and long-term health.

The first cases were spotted in Scotland less than a month ago, prompting a warning from UK health officials who say they have detected as many cases in three months as they would expect to see in a year.

The majority of cases have been spotted in under-5s who were initially hit with diarrhoea and nausea before later getting jaundice — the yellowing of the skin/eyes.

Dr Meera Chand, director of clinical and emerging infections at the UK Health Security Agency, told the European Congress of Clinical Microbiology and Infectious Diseases in Lisbon Monday that younger children were getting infected by the virus as they had not been exposed to it ‘during the formative stages that they’ve gone through during the pandemic’.