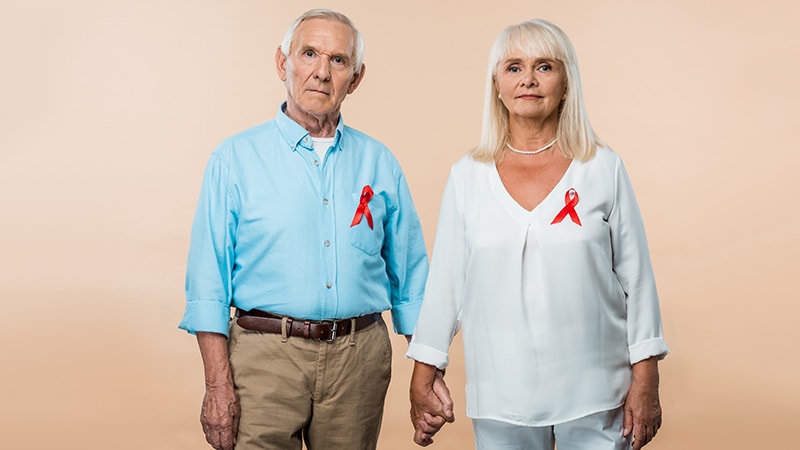 People aged 65 or older with human immunodeficiency virus (HIV) receive significantly more non-antiretroviral therapy (non-ART) medications, compared with patients with HIV who are between ages 50 and 64, according to a new study.

Moreover, in a sample of more than 900 patients with HIV, about 60% were taking at least one potentially inappropriate medication (PIM).

“Clinicians looking after persons living with HIV need to provide medication reconciliation with prioritization of medications based on the patients’ wishes and patients’ goals and life expectancy,” lead author Jacqueline McMillan, MD, clinical assistant professor of geriatric medicine at the University of Calgary in Alberta, Canada, told Medscape Medical News.

The findings were published online February 5 in the Canadian Journal of General Internal Medicine.

A geriatrician by training and a clinical researcher with an interest in aging in patients with HIV, McMillan said she began to observe that many older adults with HIV were on polypharmacy. “There are many other things that aging people with HIV experience, such as frailty, falls, cognitive impairment, medication nonadherence, and mortality, but in this study, we focused just on the polypharmacy,” said McMillan.

Her aim was to see if there was a way to improve the pill burden in these older adults.

“Do they need to be on all of these medications? Is there anything that we were overprescribing that they no longer needed, or possibly not prescribing and undertreating people because they were older? I wanted to have a better sense that the medications we were prescribing were appropriate and that we minimized the pill burden for older adults,” McMillan said.

Persons with HIV are at a particularly increased risk of polypharmacy and potential drug-drug interactions because they need ART medications and medications to treat comorbidities.

“Certainly, when the ARTs were first discovered, sometimes that regimen required several pills a day, but as time has gone on and our retrovirals have gotten better, some of those requirements have narrowed down to one-pill-a-day regimens. We are now replacing that pill burden with non-HIV drugs,” said McMillan.

The researchers obtained medication reconciliation data for 951 persons with HIV aged 50 or older as of February 1, 2020. The study population was receiving HIV care through the Southern Alberta HIV Clinic (SAC) in Calgary. The researchers defined polypharmacy as taking five or more non-ART drugs. They defined PIMs according to the 2019 Beers criteria.

In their analysis, the researchers compared patients aged 65 or older with patients aged 50-64, as well as patients with shorter (< 10 years) and longer (> 10 years) duration of HIV infection.

The researchers collected sociodemographic, clinical, medication, and laboratory data for all patients at each clinical visit.

In all, almost 60% of patients were taking at least one PIM. The mean number of PIMs per patient was 1.6.

Patients living with diagnosed HIV infection for more than 10 years were at greater risk of PIMs (1.6 PIMs) than those with shorter duration of HIV diagnosis (1.4 PIMs, P = .06).

McMillan says she hopes her study reminds clinicians to review patients’ medications at each visit and ensure they are neither over- nor underprescribing.

“From my perspective as a geriatrician, I hope that we do more dedicated medication reconciliation to actually make sure we know what people are taking,” she said. She asks patients to bring all their medications to the office so that they can review which ones match their diagnoses.

“I want to do more patient-centered personalized care for older adults, with a focus on people who are frail and who may have a limited life expectancy, so that we don’t have someone with a short life expectancy still taking 15 medications a day,” said McMillan.

“This study identifies potentially inappropriate medication use in a group of older people living with HIV who are particularly vulnerable to it at an earlier age because of their medical complexity or frailty than perhaps healthy older adults,” Adrian Wagg, MD, professor of Healthy Aging in the Department of Medicine at the University of Alberta, Edmonton, Canada, told Medscape Medical News.

The study emphasizes the importance of careful documentation of medications that the patient is taking at every clinical visit, he said.

“Make sure you carefully document medications which are taken whenever you see the individual. Also try to limit the number of prescribers, because we know multiple prescribers are associated with greater likelihood of inappropriate prescribing,” Wagg said.

The move to wean patients from inappropriate medications is gaining momentum, he added.

“There is a huge movement now around actively de-prescribing medications which are either no longer indicated or potentially of little benefit, given remaining life expectancy,” said Wagg. Drugs such as proton pump inhibitors, hypnotics, unrequired antidepressants, and benzodiazepines are the first targets for elimination, he concluded.

The study was funded by the University of Calgary. McMillan and Wagg reported no relevant financial relationships.