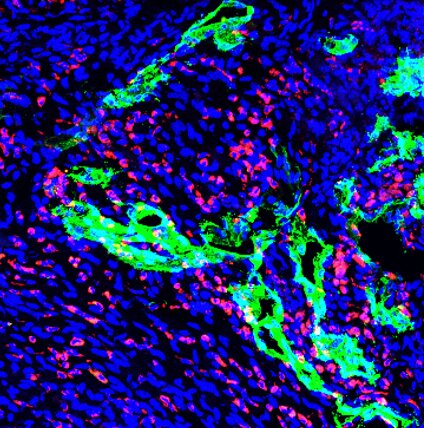 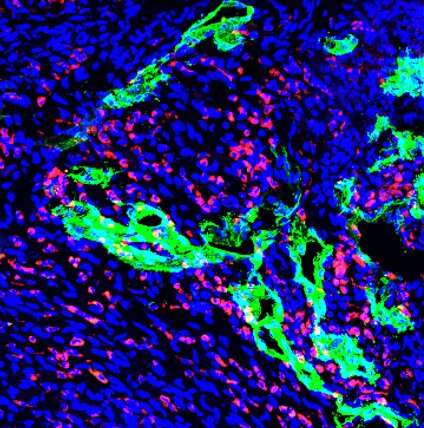 Expression of a pro-lymphangiogenic growth factor after heart injury activates the lymphatic system, spurring leukocytes to help clear away dying cells, according to a Northwestern Medicine study published in the Journal of Clinical Investigation.

The findings cement the lymphatic system’s role in repair after heart attack and has both theoretical and practical therapeutic implications, according to Edward Thorp, Ph.D., associate professor of Pathology in the Division of Experimental Pathology and co-senior author of the study.

“We’ve identified a new target that may help clear away dead tissue,” said Thorp, who is also a professor of Pediatrics. “This could mitigate reperfusion injury and some future studies will test therapeutic principles of this strategy.”

“This paper brings together lots of interesting data and conclusively demonstrates the important functional role of lymphatics in this process,” added Guillermo Oliver, Ph.D., the Thomas D. Spies Professor of Lymphatic Metabolism and co-senior author of the study.

After a heart attack, immune cells called macrophages help dispose of dead cells, engulfing and digesting them in a process called efferocytosis. Previous studies have observed increases in leukocyte activity after a heart attack, with some dead material being shuttled towards draining lymph nodes—raising the question of interaction between macrophages and the lymphatic system.

In the study, investigators prevented efferocytosis after an experimental heart attack in mice, observing that this modification caused less lymphatic activity and reduced expression of the pro-lymphangiogenic growth factor vascular endothelial growth factor C (VEGFC). VEGFC is a protein that promotes lymphatic vessels formation, a process that appears to improve cardiac repair after heart attack.

These findings show that macrophages must digest dead heart cells to trigger expression of this growth factor.

“Previous studies showed that VEGFC was associated with improved heart function after injury, but the source of VEGFC was unknown,” said Wanshu Ma, Ph.D., former postdoctoral fellow in the Oliver laboratory and co-lead author of the study. “This work identifies the link between macrophage efferocytosis and VEGFC production.”

Boosting clearance of dead cells could help reduce reperfusion injury, the tissue damage caused when blood supply returns to tissue after a period of hypoxia. Restoring circulation can cause an inflammatory response, and reducing the concentration of dead cells through better lymphatic drainage could reduce intensity of the inflammation, according to the authors.

Further, this macrophage-lymphatic cross-communication may be present in other areas of the body, according to Oliver.