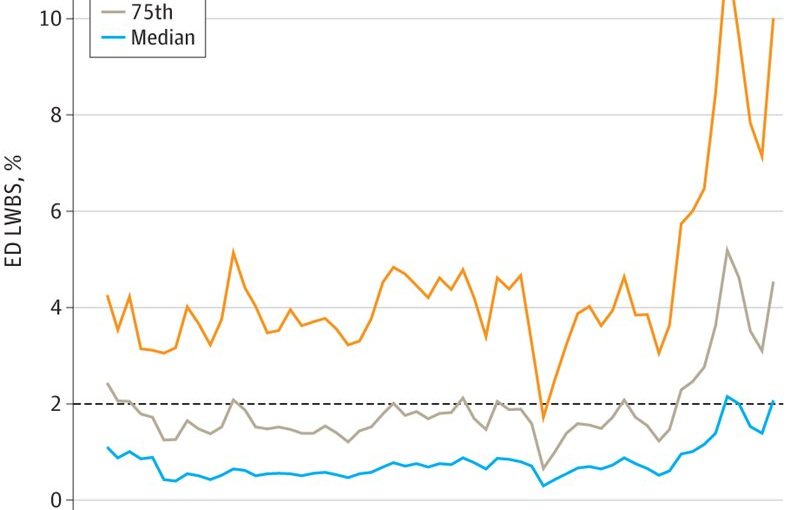 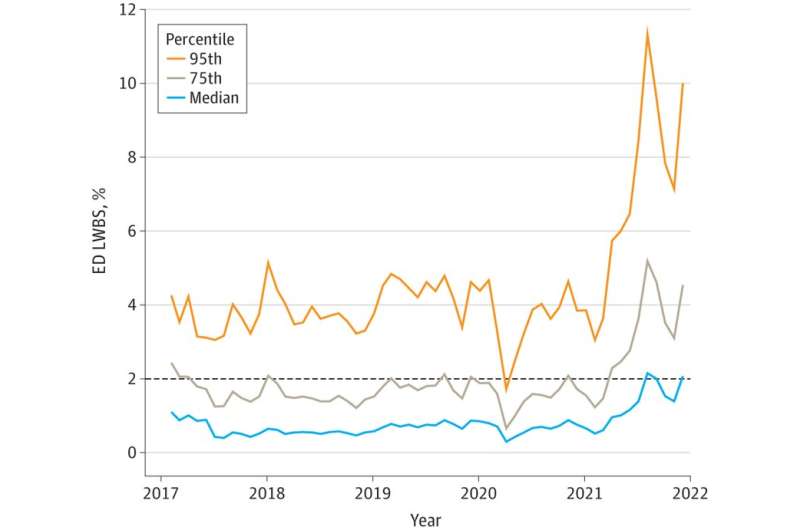 In a pair of new studies, Yale researchers document a widespread and increasing level of overcrowding in America’s emergency departments (EDs), a crisis that puts patient safety and access to care at risk.

For the studies, the researchers examined, respectively, the progression in recent years of two measures of ED function and hospital capacity: boarding time—or how long patients remain in the ED after physicians have determined they should be admitted to the hospital—and how often patients leave the ED before receiving care.

Their findings, they say, help characterize the bigger issues that underlie ED crowding. And they show that the issue worsened during the COVID-19 pandemic. Their methods also yield more timely assessments of these key indicators, which historically have been hard to come by.

“This is not an ED management issue,” said Arjun Venkatesh, an associate professor of emergency medicine at Yale School of Medicine and an author of the studies. “These are indicators of overwhelmed resources and symptoms of deeper problems in the health care system.”

The studies were both published Sept. 30 in JAMA Network Open.

It was during the 1980s that ED crowding emerged as an issue of national concern. The problem has only gotten worse in the decades since, with negative effects for patients and hospital staff alike. For patients, studies have found that ED crowding is correlated with discomfort, reduced privacy, treatment delays, and higher risk of prolonged disease and death. ED crowding also leads to increased violence toward staff, greater clinician and nurse turnover, and high rates of burnout. A recent study found nearly 63% of surveyed U.S. physicians experienced burnout in 2021.

In one of the new studies, researchers found that boarding times—or the amount of time patients were kept in the emergency department after clinicians had determined they should be admitted—were related to hospital occupancy rates, or the percentage of staffed inpatient beds that are occupied. The Joint Commission, an independent national health care accrediting body, has recommended that boarding time not exceed four hours.

For the study, Yale researchers evaluated these measures in U.S. hospitals during the COVID-19 pandemic, from January 2020 to December 2021. They found that when occupancy exceeded 85%, boarding times exceeded this four-hour standard. In fact, under those circumstances, the median ED boarding time was 6.58 hours. Boarding times also worsened throughout this time period, outpacing occupancy rates.

This relationship makes sense, says Alexander Janke, lead author of the studies, because when occupancy is high, there are few available beds to move patients from the ED. And with diminishing capacity, wait times are compounded.

“Hospitals must have some flexible capacity so there are places for patients with emergencies requiring hospitalization to go,” said Janke, who conducted the research while a fellow at Yale School of Medicine and is now at the University of Michigan. “And that capacity doesn’t exist in a lot of places.” Which means patients stay in the ED until space opens at their destination and ED beds remain occupied, limiting the number available to new patients.”

This latter impact can affect ED wait times. And when those are long, patients are more likely to leave before being evaluated. In the second study, researchers assessed the rates at which patients in U.S. hospitals decided to leave EDs before even being seen by a clinician.

From January 2017 to December 2021, the median rate of patients leaving without being seen nearly doubled from 1.1% to 2.1%. At the worst performing hospitals, those rates were as high as 10% by the end of 2021, a number Janke called “astonishing.”

“It’s a measure of access to care,” he said. “If you have to wait hours and hours to be evaluated in the ED, then that’s not the access to care that we have required by law in [the Emergency Medical Treatment and Active Labor Act, or EMTALA].” (Enacted in 1986, EMTALA requires universal provision of emergency care by hospitals that accept Medicare payments.)

These findings, the researchers say, offer a snapshot of the current state of EDs in the United States, and provide critical data that typically are difficult to obtain in a timely manner. Though hospitals are required to report certain measures on a yearly basis, those data often aren’t released publicly for another two or three years, rendering them irrelevant, said Janke.

“The health care system is a living, breathing organism, and it’s like we measured its vital signs one time three years ago and that’s how we make public policy,” he said. “You and I should know whether the acute care system where we live has the capacity to address, say, a heart attack or a stroke in a family member. This is a problem that affects population health.”

The researchers want people outside of the ED community to recognize this population-level effect and the impacts of ED crowding.

“We hope our findings begin to draw attention and accountability for the human toll of the ED boarding crisis,” said Ted Melnick, associate professor of emergency medicine at Yale School of Medicine and an author of the studies.

For both studies, the researchers collected data from a large electronic health record vendor, an approach that’s particularly helpful in the absence of other national or local data.