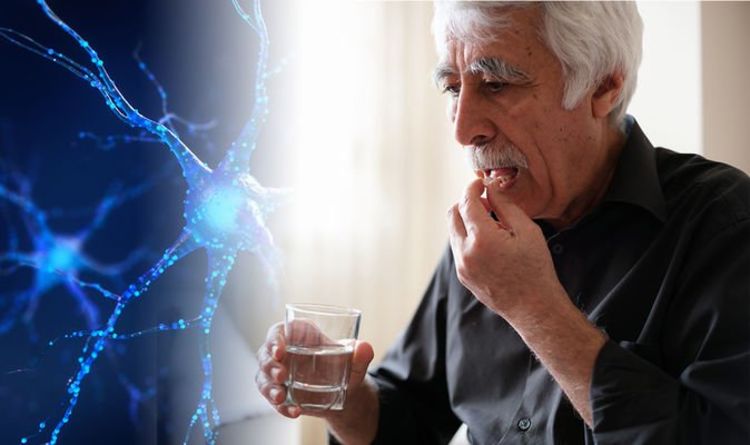 Dementia: Dr Sara on benefits of being in nature

“Proton pump inhibitors (PPIs) are a medication to help reduce acid reflux,” said Dr Glenville. “They are now thought to increase the risk of developing dementia by 44 percent because they increase the level of beta-amyloid in the brain.” Experts at the Alzheimer’s Association described beta-amyloid as a “microscopic brain protein”. The amyloid hypothesis is that the sticky compound accumulates in the brains of dementia patients, disrupting communication between brain cells.

Eventually, an overabundance of beta-amyloid is said to kill brain cells.

The charity elaborated: “Beta-amyloid is a small piece of a larger protein called amyloid precursor protein.”

Then chains of clusters are called fibrils, and “mats” of fibrils are called beta-sheets, with the final stage known as plaques.

The Alzheimer’s Society added: “According to the amyloid hypothesis, these stages of beta-amyloid aggregation disrupt cell-to-cell communication and activate immune cells.

Dr Glenville warned there are “several” other over-the-counter medicine that could have an impact on the way the brain works.

Anticholinergics – found in treatments for colds, flu, heartburn, and sleep problems – “block the chemical acetylcholine that your body needs to transmit electrical impulses between nerve cells”.

So what is Dr Glenville’s advice? “Try to only use over-the-counter medicine unless you really need them,” she said.

“And if you are on a prescription medicine, ask your doctor if there are any other alternatives.”

As a nutritionist, Dr Glenville shares what she believes are also risk factors for developing dementia.

“It is extremely important that you eat well, as your mind and body are very much connected,” she said.

“We know from research that eating a Mediterranean diet leads to less memory loss and problems with concentration.”

Choosing products made from vegetable and plant oils, such as olive oil.

Thus, eating an unhealthy diet might increase a person’s risk of brain disease.

ther risk factors can include a sedentary lifestyle, a lack of sleep, stress, and vitamin D deficiency.

“We have known for many years that vitamin D is important for bone health and in the prevention of osteoporosis,” said Dr Glenville.

“However, it is only in recent years that we have realised how important this nutrient is for general health, particularly for brain health.”

Dr Marilyn Glenville PhD is an award-winning author and the UK’s leading nutritionist.