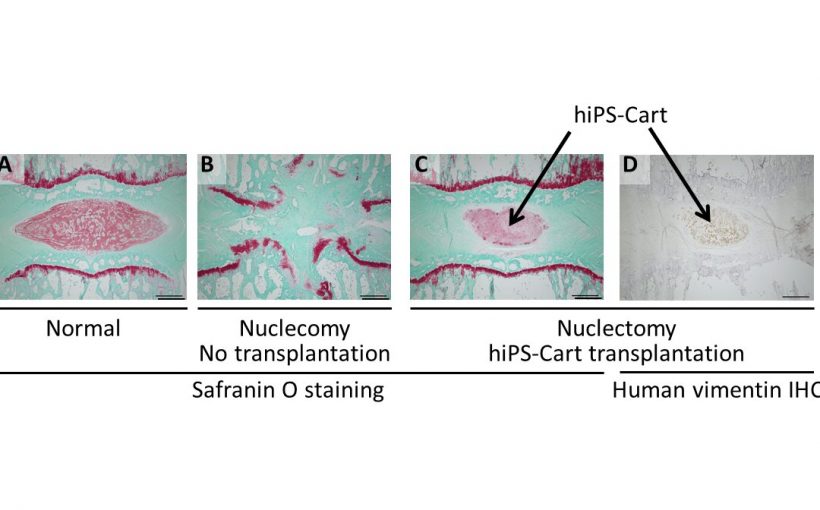 Many people have experienced the struggles of dealing with low back pain. A common cause of this pain is degeneration of intervertebral disks (IVDs), which are located between the vertebrae and help give the spinal column its flexibility. Thus, IVD degeneration can lead to more serious conditions such as spinal deformity. In a recent article published in Biomaterials, a team led by researchers at Osaka University and Kyoto University demonstrated that using cartilage tissue derived from human stem cells could help prevent the loss of functionality from IVD degeneration.

It is believed that IVD degeneration originates in the nucleus pulposus (NP), which is composed of NP cells that produce the surrounding extracellular matrix (ECM). The ECM fosters an environment that is supportive of the NP cells, and also helps give the NP its mechanical elasticity. Previous work on treatment methods utilizing native viable NP cells that help produce the ECM has been promising, but these restorative effects are lost in advanced stages of degeneration where these cells are no longer present. Therefore, the Osaka University and Kyoto University group aimed to establish a tissue-engineered implant that contains the necessary cells to create and maintain the ECM in the NP.

“The ECM of the NP is a network of collagen that acts as scaffolding for other important proteins. Interestingly, this composition is similar to the ECM of articular cartilage,” says Takashi Kamatani, lead author of the study. “Thus, we hypothesized that cell types that can produce and support cartilage could be useful for treating IVD degeneration.”

The researchers used induced pluripotent stem cells (iPSCs) that can become different cell types, because they do not have the growth and division limits of native NP cells. Additionally, they can be induced to become chondrocytes, which are cells that produce and maintain cartilage. This method had been successfully used to create repair tissue when implanted into certain animals with articular cartilage defects. Here, they developed human iPSC-derived cartilaginous tissue (hiPS-Cart) for implantation into lab rats that had the NP removed from the IVD as a model of IVD degeneration.

“The hiPS-Cart implanted in these rats was able to survive and be maintained,” explains senior author, Noriyuki Tsumaki. “IVD and vertebral bone degeneration were prevented. We also assessed the mechanics and found that hiPS-Cart was able to revert these properties to similar levels observed in the control rats.”

The team also examined the gene expression profile of hiPS-Cart six weeks after implantation. They found characteristics consistent with chondrocyte-like NP cells and not the other NP cell type (called notochordal). This suggested that these chondrocyte-like cells alone were sufficient to restore the NP functionality.

“Our findings provide strong support for using this hiPS-Cart system in the development of treatments for human IVD degeneration,” says Kamatani.