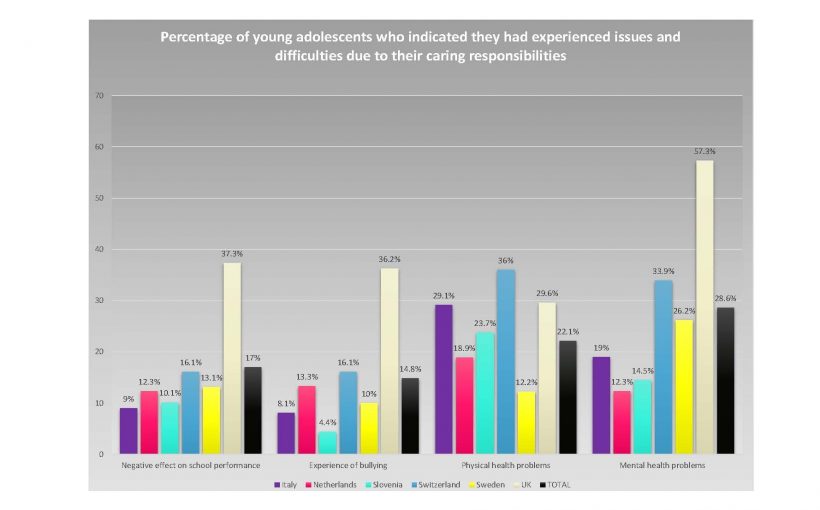 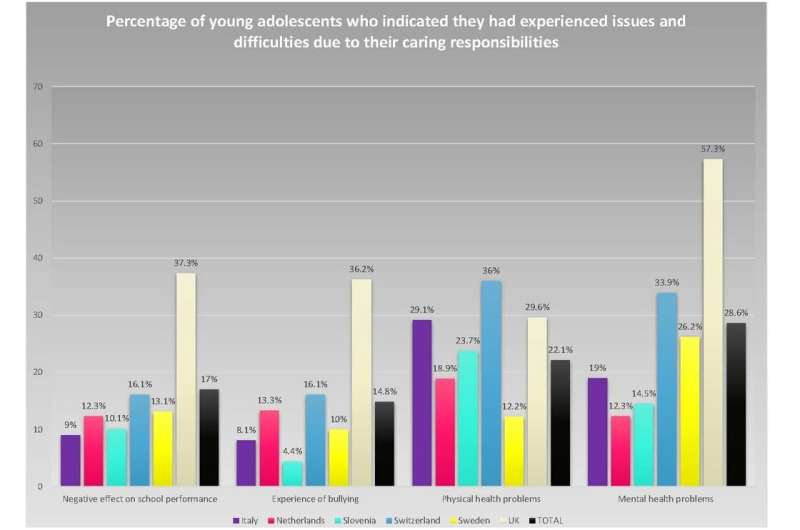 Around 3 in 10 adolescent young caregivers in the UK think about self-harming, and more than 10% contemplate harming others—often the person for whom they are caring, new data show.

The figures are from the first ever cross-national study of the health and well-being of adolescent young caregivers: people aged 15 to 17 with caring responsibilities for a family member or friend. Researchers surveyed 2,100 adolescent caregivers in six different countries, alongside 5,000 non-caregivers of the same age.

The results raise urgent concerns about the specific pressures and mental health impacts of caring on young people approaching adulthood. Although the study provides evidence that some adolescent caregivers benefit from the experience, a significant number showed signs of poor well-being and distress. Girls appear to be particularly at risk.

Asked whether, because of caring, they had thought about harming themselves, 14% of the entire sample of adolescent caregivers said they had, but the figure was twice as high among caregivers in the UK (28%). The percentage of all UK adolescents who actually self-harm is thought to be 13% to 19%.

A total of 6% of the entire sample, and 12% of those in the UK, said that because of caring they had considered hurting someone else. Within this group, about 45% (across the entire sample) said that the other person was the care recipient. There was no evidence that these young caregivers represented a real threat to others, but the finding is indicative of the constant pressure and feelings of isolation that characterize their day-to-day lives.

Numerous other findings similarly indicate that many adolescent caregivers are struggling to cope. A total of 36% across all six countries, and 56% in the UK, said their mental health had deteriorated because of their responsibilities. Overall, 17% (37% in the UK) said their performance at school had suffered and 15% overall (36% in the UK) reported being bullied about caring. Psychometric tests further revealed significant numbers whose well-being levels and experience of caring were “of potential concern.”

The pan-European study, the Me-We Young caregivers project, aims to understand how best to protect the mental health and well-being of adolescent young caregivers, using data gathered from caregivers aged 15 to 17 in Italy, the Netherlands, Slovenia, Sweden, Switzerland and the UK.

Many of the UK results are worse than the six-country average. While this is partly because the UK sample involved a disproportionate number of adolescents with very demanding care responsibilities, it probably also reflects the high prevalence of mental health problems among UK adolescents.

Professor Saul Becker, from the Faculty of Education, University of Cambridge, who is part of the project team, said, “A significant number of adolescent young caregivers are experiencing real difficulty, isolation and distress. The results do not mean they would actually hurt someone, but it is clear they sometimes feel desperate. That can manifest itself in various ways: They may get into trouble at school, think about hurting themselves, or feel as though they want to lash out.” 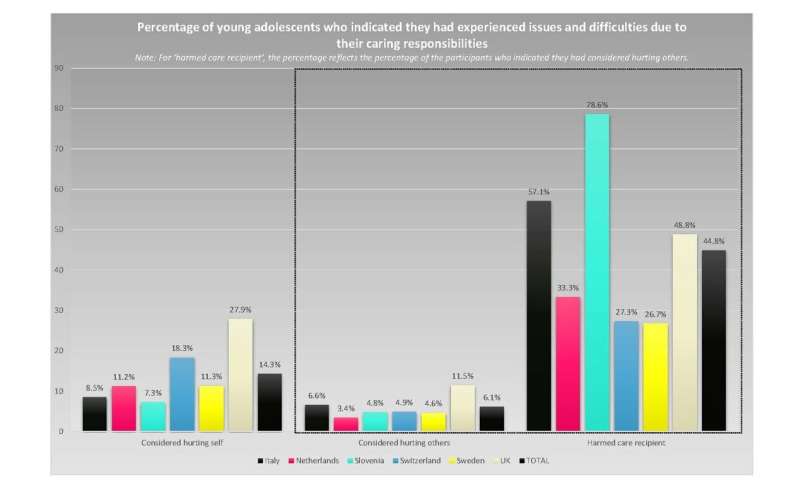 Andy McGowan, head of engagement at Caring Together, which supports caregivers in the East of England, said the results reflected a specific constellation of pressures affecting the 15-17 age group.

“At this age their caring responsibilities often grow,” he said. “They then have to balance those commitments with challenges that affect all adolescents: college work, applying for university, or trying to get a job. The pressure just builds and builds. A substantial number feel absolutely at the end of their tether and as if there’s no ‘off’ switch; no way out.”

The exact number of adolescent young caregivers in the UK is unclear. According to the 2011 census there were at least 178,000 people aged five to 17 with caring responsibilities, and 83,500 within the adolescent 15 to 17 bracket. These reports are known to undercount the true extent of caring among children and adolescents, however. BBC data have indicated the total number of caregivers aged five to 17 could be nearer to 800,000, with approximately 334,000 aged 15 to 17.

Of the 2,099 adolescent young caregivers surveyed in the new research, most (69%) cared for a family member. 16% cared for more than one relative and 22% for both a family member and friend. The majority cared for parents, although in Italy 59% were responsible for grandparents—suggesting that in some countries young people are supporting shortfalls in eldercare among aging European populations.

Overall, the greater an adolescent’s caring responsibilities were, the more likely they were to experience serious difficulties. Girls, who typically shouldered more than boys, also tended to report lower well-being. According to one standard test, in which a score of 50 represents “extremely high well-being” and adolescent non-caregivers scored an average of 37, female caregivers in the UK averaged just 29.

Most adolescent caregivers said they did receive some support, but this finding should be treated with caution. “What they are getting varies in quality and quantity, and often there is very little evidence it is having an effect,” Becker said. “It’s no great surprise that a significant proportion who do get some help are still in distress.”

The report argues that support for adolescent caregivers needs to be widened far beyond the available services such as young caregiver projects. Researchers suggest the eventual goal should be a “No Wrong Door” system combining health, education, social care and other services, in which any trusted adult to whom a young caregiver turns can either provide, or ensure they receive, appropriate help.

“Young caregivers are less likely to approach social services, but they might feel they can talk to a teacher, their GP, or someone outside school,” Becker said. “We need a system in which every agency that touches on their lives is working together on this.”