Tragedy as nine-months pregnant woman, 36, dies after collapsing in hospital car park – but doctors manage to save her baby girl

A pregnant mother collapsed in a hospital car park and died the after from a rare complication just days before she was due to give birth.

Rachel Molloy suffered a ruptured splenic artery aneurysm – a rare complication of pregnancy that often kills both mother and baby.

The 36-year-old and her husband Nick had driven to the hospital when she began having abdominal pains, believing she was about to go into labour.

Mr Molloy, 35, went from being an excited second-time father-to-be to a widower in fear of losing his unborn baby.

Baby Isabelle defied the five per cent survival odds and was delivered by Caesarean section at Wythenshawe Hospital, Manchester on April 24.

Mrs Molloy will never get to meet her baby because she died the next day.

She didn’t know she was expecting a little girl as she had wanted it to be a surprise, with the news of Isabelle’s arrival one of the last things Mr Molloy ever whispered to his wife before she passed away. 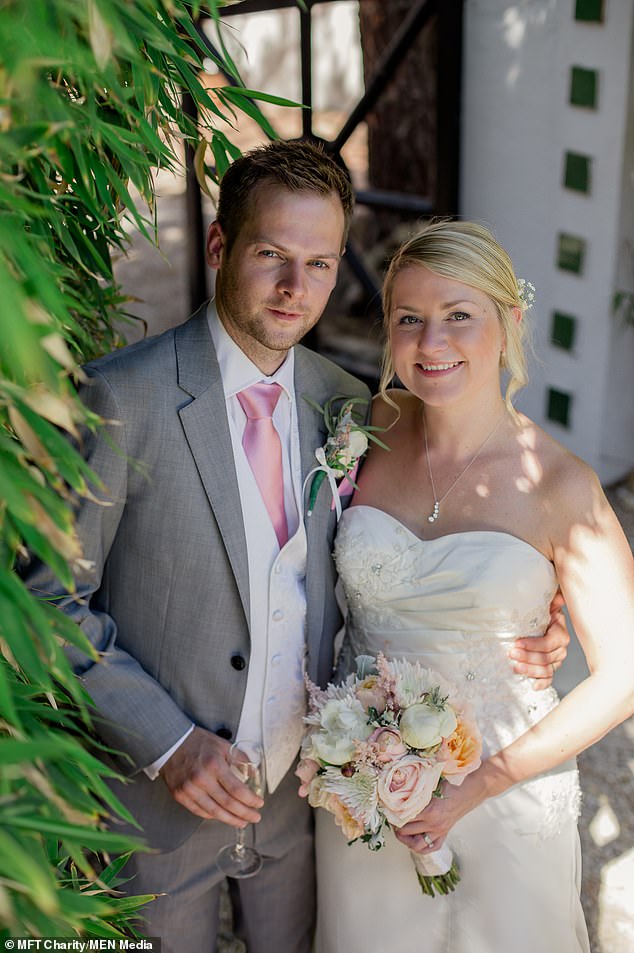 Rachel Molloy, 36, suffered from a ruptured splenic artery aneurysm – a rare complication of pregnancy- in the car park of the hospital at nine months pregnant. Pictured with her husband, Nick, on their wedding day in 2014 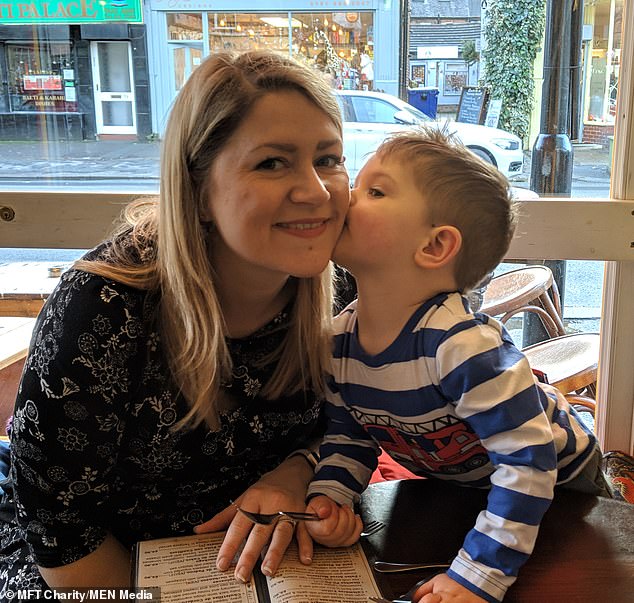 Mrs and Mr Molloy had driven her to the hospital when she began having abdominal pains, believing she was about to go into labour. Pictured with her first child, James 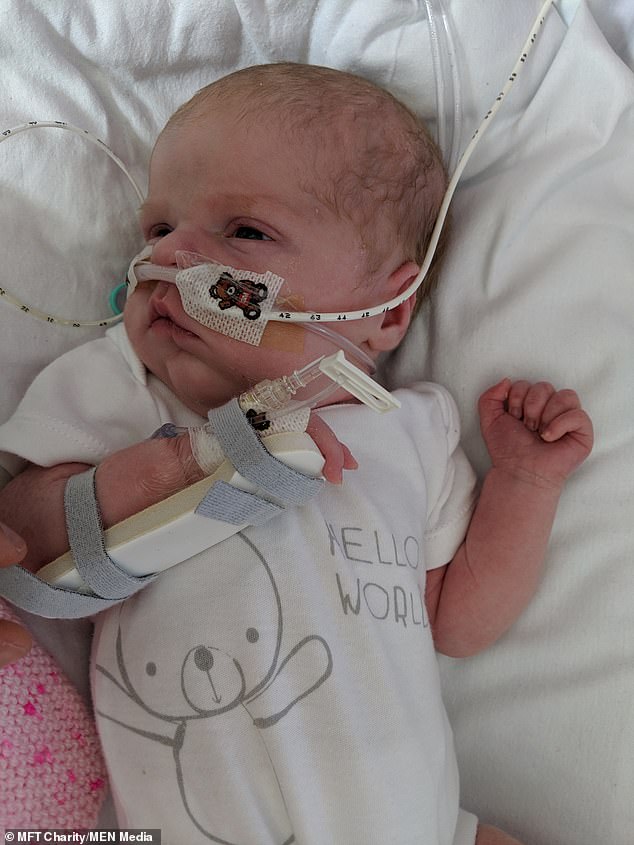 Baby Isabelle was delivered by C-section at Wythenshawe Hospital, Manchester on April 24. Two months on, Isabelle is still being looked after by a neonatal intensive care team

Mr Molloy, from Sale, Greater Manchester, said: ‘She was the light of my life and my true soulmate.

‘I can’t imagine this world without her, because she was my world.’

‘Rach never got to meet our little girl.

‘It breaks my heart to think that Isabelle will never get to meet her mother. But I know Rach’s memory will live on in her children and everyone who knew her.’

There were no symptoms leading up to the aneurysm – the pregnancy had been as smooth and uneventful as her first.

Just days before, Mr and Mrs Molloy and their son James, three, had enjoyed a day out in the sun on Easter Monday.

But then, on April 24, Mrs Molloy started having abdominal pains, the most common sign of rupture of a splenic artery aneurysm (SAA).

SAA is a rare condition which affects the blood vessel that supplies oxygenated blood to the spleen.

An aneurysm is a bulge in a blood vessel caused by a weakness in the blood vessel wall. As blood passes, the blood pressure causes a small area to bulge outwards like a balloon.

If it bursts, it can cause life-threatening internal bleeding.

SAA occurs four times more frequently in women compared to men, and 95 per cent of the time during a pregnancy, most commonly during the third trimester

Hormonal and physiologic changes have been proposed to explain the increased incidence of SAA in pregnancy, as oestrogen, progesterone, and relaxin may change the structure of the arterial wall.

Mr Molloy drove her to Wythenshawe Hospital, but the aneurysm ruptured and she collapsed in the car park.

Mrs Molloy wasn’t breathing, her heart had stopped, and Isabelle had to be delivered by C-section. The details of her delivery are unclear.

Mrs Molloy’s loved ones were told she had suffered a cardiac arrested and she was put on life support.

Tragically, Mrs Molloy could not be saved, and she died in the early hours of the next morning.

Two months on, Isabelle is still being looked after by the neonatal intensive care team at Saint Mary’s Hospital in Manchester. 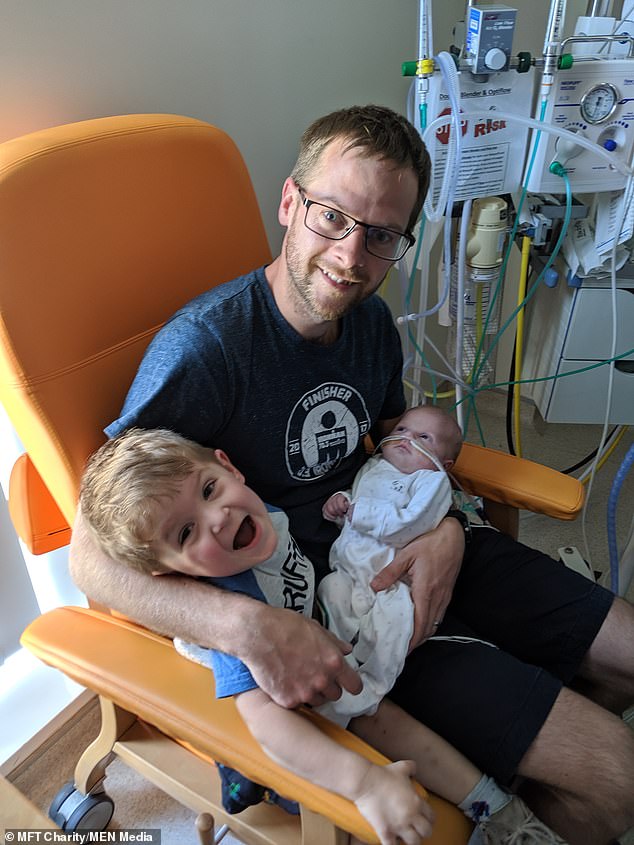 Mr Molloy’s focus now is on James and preparing to welcome Isabelle home when she is discharged from hospital, which will hopefully be in the next couple of weeks. He has raised more than £16,000 on JustGiving for the hospital 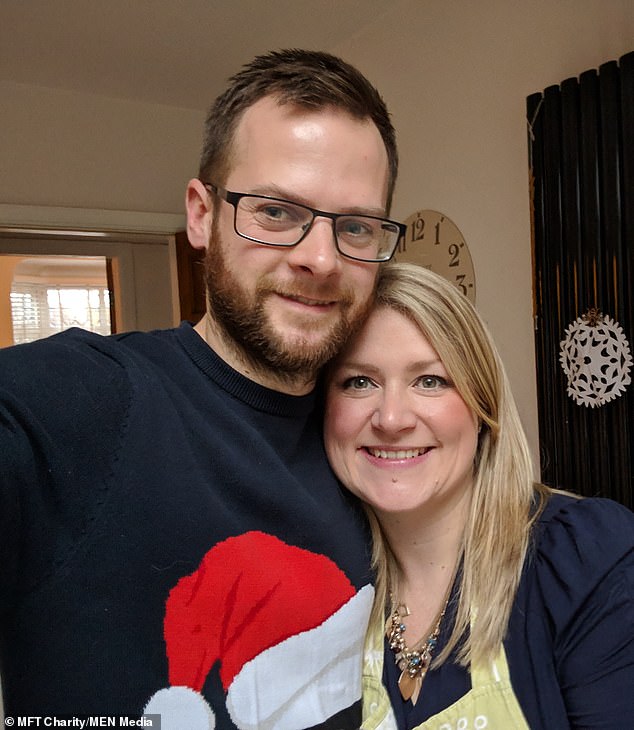 Mr and Mrs Molloy met in 2009. It has been a difficult time for the family, with June marking James’ third birthday – and also what should have been the couple’s fifth wedding anniversary

WHAT IS A RUPTURED SPLENIC ARTERY ANEURYSM?

Causes include high blood pressure, injury, infection and inflammation of the pancreas.

The prevalence of SAA is unknown. In the general population it is thought to be low at around 0.1-0.2 per cent, although an autopsy study in patients 60 years of age or older found a prevalence as high as 10.4 per cent.

Around 95 per cent of the time during a pregnancy, most commonly during the third trimester.

But SAA rupture in pregnancy is difficult to diagnose since its symptoms mimic so many other pregnancy problems, including abdominal pain, nausea and vomiting.

Hormonal and physiologic changes have been proposed to explain the increased incidence of SAA in pregnancy, as oestrogen, progesterone, and relaxin may change the structure of the arterial wall.

An aneurysm is a bulge in a blood vessel caused by a weakness in the blood vessel wall, usually where it branches.

As blood passes through the weakened blood vessel, the blood pressure causes a small area to bulge outwards like a balloon.

If it bursts, it can cause internal bleeding.

Although she is no longer on a ventilator, the long term consequences of any brain damage won’t be known for quite some time.

Mr Molloy said: ‘You hear of tragedies but they don’t really hit home for you – they happen on the news and in films. But when it happens to you, you just can’t believe it.

It has been a difficult time for the family, with June marking James’ third birthday – and also what should have been the couple’s fifth wedding anniversary.

Mr and Mrs Molloy met via a dating website in 2009, and a little over a year later, they were off travelling the world together.

Mr Molloy popped the question on a gondola ride while on holiday in Venice, and they were officially married at the registry office in Manchester, but consider the real date as June 21, 2014, when they held a blessing ceremony in Spain.

Mr Molloy said the couple had decided if they had a daughter to name her Isabelle Rey, but after realising what was about to happen, he changed it to Isabelle Rachel.

Mr Molloy said: ‘My own birthday was 9th April and Rachel made me a card. In it she’d written: “To a fantastic Daddy. I can’t wait for our next adventure as a family of four”.

‘Rachel was a very driven person and never took her foot off the pedal. She was the go-to person for all her friends when they had questions about career, cooking, relationships, anything.

‘And she was a wonderful mum. She lived for the kids.’

Inspired by the care his wife received at Wythenshawe – and the amazing staff at Saint Mary’s looking after Isabelle – Mr Molloy decided to launch a fundraising appeal, as a thank you to both hospitals for everything they have done for his family.

At first he only expected to raise a few hundred pounds, but within weeks the JustGiving page had more than £16,000.

Mr Molloy said: ‘Something like this changes your reality and makes you realise how awful a terrible tragedy can be.

‘In my mind, if this money helps save someone’s life or stops another family from going through something horrible, then it has done its job. I’m holding onto that thought, because I’m really struggling to see any other good that can come of this.

‘I want to help people now. My perspectives on life have completely changed.’

Mr Molloy’s focus now is on James and preparing to welcome Isabelle home when she is discharged from hospital, which will hopefully be in the next couple of weeks.

She is being fed through an nasogastric tube to her stomach and Mr Molloy has been taught how to feed her with the tube.

Once the staff at Saint Mary’s are happy that she is stable and healthy he’ll be able to take his daughter home.

Mr Molloy said: ‘I feel hopeless and powerless. I can’t rewind the clock and change things – but I can make the best of a truly awful situation by doing something positive.

‘£16,700 is just an incredible amount and that’s mostly from people we know. I think donating gives people that sense of “I’m helping”.’

Sarah Naismith, director of Manchester Foundation Trust Charity, which the Wythenshawe Hospital Charity and Saint Mary’s Hospital Charity, comes under – said: ‘No one at the charity, or indeed the two hospitals, can quite grasp what has happened to Rachel – it is such a sad and tragic story.

‘The fact Nick has been able to think of others through this awful experience is nothing short a miracle.

‘I can’t emphasise enough how truly moved we are that Nick wants to help other people and we’re incredibly grateful to each and every person who has made a donation, either at the funeral or via the JustGiving Page. Thank you.’